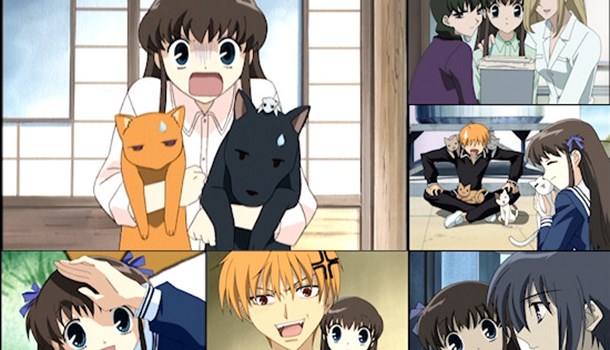 When our review copy of MVM Entertainment's re-release of Fruits Basket landed on our doorstep, there was an undoubtable weight to its package - not simply the weight of the four DVDs that make up this complete collection, but also the psychological weight of cherished memories and enjoyment that comes from a series based around easily the most popular manga in the west, which went on to make similar inroads into fandom with nearly a decade of popularity in this animated form.  Having (for my sins) never watched the series in its entirety before, it's something of a high pressure situation to revisit a much-loved classic and put it under the spotlight once again.

For those unfamiliar with it in either manga or anime form, Fruits Basket tells its tale via Tohru Honda; a selfless, well-mannered and ever-helpful girl who has been dealt the cruellest hand of cards by fate which leaves her parentless and, for a spell, homeless as her grandfather's house is renovated.  Rather than bother anybody, Tohru decides that the only sensible resolution to her problems is to live in a tent while keeping her predicament a secret from her friends - a secret which doesn't last long when she's stumbled upon by the "prince" of her school Yuki Sohma, who insists that he come and stay with him at his family home.

However, Tohru isn't the only one with a secret - indeed, her own problems are seemingly dwarfed by those of the Sohma family, who are almost to a man (and woman) plagued by a curse.  It's that curse that becomes the centre-point for the series as a whole, with each of the major players in the Sohma family hiding a secret meaning that, if hugged by someone of the opposite sex or under other particular circumstances, they each turn into a different animal from the Chinese zodiac, with the exception of "black sheep" Kyo who turns into a cat outside of said zodiac thanks to the trickery of the group's rat - a role which just so happens to fall to Yuki, making for a fractious relationship from the start.

As the series progresses, so we're introduced to more and more members of the Sohma family, and as a result we also get to meet more members of the zodiac, each with their own issues and problems, many of which strike towards the dark core of the family and more specifically its head, the mysterious and seemingly vindictive Akito.  All of the petty-rivalries, issues with self-confidence and the like bring young Tohru into her element, as her patience and positivity bring out the best in the Sohma family, to the point where even Akito's threatening behaviour seems to be nullified.  Whether Tohru is ready for the full horrors of the Sohma family curse remains to be seen, however.

If all of these sounds a little deep and serious then fear not, as for all its introspective thoughts about the nature of human relationships and the events which shape them there's also a surfeit of comedy within Fruits Basket - the whole mechanic of members of the Sohma family turning into animals when hugged is a slapstick gift that is never over-utilised but still makes for some good laughs, while there's plenty of banter between characters helped along by the show's fun and bouncy animation.

Despite being over a decade old, Fruits Basket remains a relatively fresh piece of fruit in terms of its presentation - the DVD transfer here is arguably better than a lot of modern releases, and the animation styles and techniques used here might be dated in technical terms but still hold up very well on-screen, perhaps because of their simplicity rather than despite it.  In particular, I have to call attention to episode eighteen of the series, which follows the members of Yuki Sohma's so-called fan club - this particular instalment alone is a master class in creative direction and use of visuals, and it stands out as one of the most fascinating episodes of anime I've ever watched even all these years later.  While the show's Japanese audio works well throughout, the English dub of the series is a little rough around the edges, while also featuring translated versions of the show's music which may irritate some - it isn't a bad dub, but its production values leave a little to be desired.

It's the contents of the series itself which will ultimately draw fans new and old to Fruits Basket however, and in those terms the show remains a solid piece of entertainment - a lot of shoujo series have appeared since this one, and some of them have arguably worked some of the elements deployed by Fruits Basket better, but as a complete package the blend of comedy, characterisation, emotional turmoil and saccharine redemption serves the series in good stead from beginning to end.  Hardcore fans of the Fruits Basket manga will gripe (and perhaps quite rightly) at some of the changes from its source material, and occasionally things threaten to run aground when the pace of events slows a little too far, but the vast majority of the series is enjoyable fare that knows when to be light-hearted and when to touch upon darker territory, which is certainly to its merit.

Not everyone will be immediately taken by Fruits Basket - its reliant on you either falling in love with or recognising the troubles which ail its characters to some extent, and for some that emotional resonance simply won't exist to great enough a degree to bring you into its warm, cosy inner circle.  For the majority though, Fruits Basket has been a massive western hit for a reason, and its drama and comedy combine to great effect in the name of entertainment.  Whether you're new to the franchise or simply need to buy a copy of the series because you never got around to it, it's great to see Fruits Basket back in the UK, and this complete collection offers an ideal opportunity to own it in its entirety.

English and Japanese 2.0 audio with English subtitles.  Extras across the four discs of this release consist of textless opening and ending credits, a behind the scenes feature, character profiles, Japanese voice actor interviews and an eyecatch gallery.

7
Despite its age, Fruits Basket remains a much-loved series which delivers plenty of drama and comedy without ever truly feeling too long in the tooth.
LATEST REVIEWS