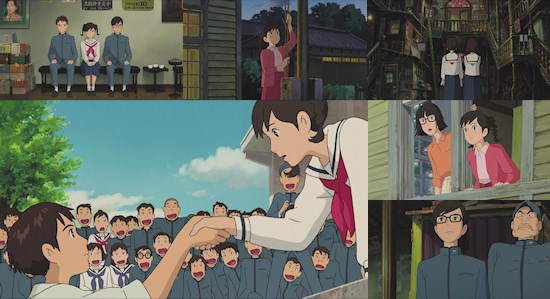 From Up on Poppy Hill (Theatrical screening)

There's no way of breaking this softly, so let's just come out with it - Goro Miyazaki's directorial debut was something of a disaster.  With a poor critical reception, Tales From Earthsea sullied the reputation of Hayao Miyazaki's eldest son before his directorial career had even begun, while the film itself proved to be something of a rarity in gaining a place as a Studio Ghibli film that's best missed.

Despite this most unwelcome scenario unfolding before him, Miyazaki junior returned to the director's chair for last year's release of From Up on Poppy Hill, a 1960s-infused shoujo manga adaptation, and a film which has now enjoyed a few theatrical outings in the UK, the latest of which took place as part of Scotland Loves Anime's Edinburgh event.  The good news is, it's actually a welcome return to directorial duties for the younger Miyazaki.

Set more specifically in Yokohama in 1963, the film quickly introduces us to Umi - a mature and hard-working girl who seems to have forgone the usual teenage desires for fun and lazy entertainment in favour of pushing herself day and night looking after her home and both her family and the guests who reside within it.  With her mother away working and her sailor father a victim of the war who Umi clearly still holds close to her, the reason for all of this hard work is more than clear.

Despite these unusual priorities for a young girl, Umi if still not entirely immune to more normal teenage proclivities, and when her attention is grabbed by a boy named Shun you can probably guess who this particular aspect of the film progresses.  Although irritated by his boisterous ways initially, the relationship between Umi and Shun grows rapidly, only at the risk of being torn asunder later in the movie as revelations threaten to break down everything that they have painstakingly built up to that point.

While this love story is a pretty typical (if enjoyable) affair, it is but a portion of the focus on the film - indeed, its arguably not even it's major focus for the most part.  Instead, much of our time is spent pondering the fate of the so-called "Latin Quarter" of Shun and Umi's school - a massive, sprawling and filthy mess of a club house which is the beloved after-school meeting place of its student body.  Despite inhabiting a beautiful old building, the powers that be within the school have decided that it should be knocked down and replaced with a brand-new one; a concept which is anathema to the student body, sparking protests and demonstrations in an attempt to reverse this decision.  Luckily for all concerned, Umi has a far more practical solution - why not just clean the place up and give it a fresh coat of paint?  Whether or not this will be enough to save the Latin Quarter becomes the pivotal story of the movie around which everything else revolves.

Although neither the film's love story nor its efforts to save an old building sound like particularly gripping incidents in isolation, they combine beautifully to work incredibly well as a wonderful, vibrant whole.  To a large extent, From Up on Poppy Hill is carried by its major characters, who are simultaneously both incredibly human in their behaviour and responses and largely likeable.  Even in the midst of some rather odd (although not unreasonable) melodrama, it's hard not to cheer on our two leads, and none of the film's secondary characters are wasted either in terms of either keeping the story moving or entertaining the audience.

It's that sense of entertainment that certainly hasn't been lost here - the entirety of From Up on Poppy Hill is tightly paced and scripted, and there's a sense of joy and fun that pervades most of the film to hold your attention or grab some laughs, only pausing occasionally when its more poignant moments come about to work their own particular magic.  Its setting and plot might not grab everybody sitting down to watch it (and some background knowledge of a 1960s Japan preparing to host the Olympic Games with an obsession of tearing down the old and replacing it with the new arguably accentuates the film's core tenets), but if you're prepared for a relatively sedate affair rather than a more classic Ghibli fantasy adventure you'll be well served.

Naturally, we can't discuss any Studio Ghibli production without talking about its visuals, and perhaps predictably From Up on Poppy Hill is simply stunning in this regard.  I'll be the first to admit that I currently have a bit of a fascination with the 1960s Japan aesthetic thanks to the recently aired Kids on the Slope, but this movie is an absolute masterpiece when it comes to delivering its key visuals.  In particular, the Latin Quarter is a bustling, busy and crowded space that is depicting perfectly as such, and the film is most likely worth multiple viewings simply to watch it coming to life as there's so much to soak in you couldn't possibly hope to do so in a single sitting.  With a brief jump into Tokyo's colourful city setting and some more sedate jaunts around Umi's town, no stone is left unturned when it comes to attention to detail, and I'd almost haltingly pinpoint this film as one of Ghibli's best in terms of its overall aesthetic.

If you're looking for comparisons between From Up on Poppy Hill and an existing Ghibli work, then the simple answer is to refer to the film as a new Whisper of the Heart - its love story is similar in construct and the general "vibe" of the movie is undoubtedly a close match to its predecessor.  On a personal note, I'd probably rate this film as the better of the two in a direct comparison, with From Up on Poppy Hill serving as a more arresting effort in terms of both story and visuals, but either way this is a great movie that deserves watching, and on a big screen if at all possible.  It certainly won't be remembered as a classic in the same way as some of Studio Ghibli's absolute greats, but that doesn't mean that this film is worthy of anything other than high praise.  This could just be the start of Goro Miyazaki's real career as a director.

9
That this film is a visual tour de force is hardly surprising; that it also delivers plenty of entertainment in the midst of an engaging story is far more newsworthy.
LATEST REVIEWS