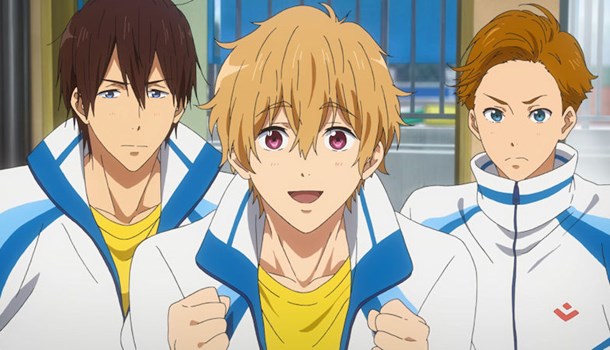 I have to confess, I wasn't familiar with Free! before we were offered a chance to see the films ahead of their UK premiere, so a bit of research was required before I sat down to watch what is, I have to say, a very attractive film. Taking place directly after the third and final TV series (Dive to the Future) the films eschew the carefree tone of the original story, with a more sombre and bittersweet feel as their youth gives way to their lives as young adults. It's a trend with Japanese anime that films following a series will often take a more serious tone (see Patlabor as a prime example) - whether that's a general Japanese regard for film as a more "worthy" medium or just a natural story progression is hard to really tell, but while it changes the nature of what made Free! stand out in the first place, it seems fitting given the underlying story and the direction of travel for each character. The frequent flashbacks to the characters as boys certainly shows how much time has passed since we first met them.

The story starts with a meet in Sydney, the last competition for the boys before adulthood, where they will face off against opponents they met throughout the series, There are plenty of references to events taking place before the film, so clearly spending some time on the show before watching these films is the ideal, but newcomers should still be able to follow the drama as it unfolds, though with less impact.

Some great CGI pool shots and water effects give the films a fabulous feeling of motion and speed, the direction by Eisaku Kawanami is very well handled, with some subtle shakes of the camera to imply movement, intimate close-ups and occasional dutch angles provide plenty of visual flair. Standout scenes, such as the opening ceremony, are clearly meant for cinema - even if the pace is somewhat languid at times, it's never anything less than pretty.

The races themselves are the real highlight, with plenty of drama in the vein of the best sports films, complete with an antagonist to test Haru's skills to the limit, though I have to say Rin's races had more impact just because he always seems more of an underdog than Haru.

The first film wraps with a cliffhanger, the team at odds, Rin and Haru parting ways before the second film begins with a 15 minute refresher which is capped by fresh material to convey the current state of Haru's mind. The film moves through a relay race to bring closure to most of the outstanding character arcs, and it has a satisfying pay-off if you've enjoyed your time with these characters through the years and watched them grow.

Clearly the films are for fans of the series, so half of the enjoyment will be revisiting characters already well served by the TV series. Fans of the show might add a point or two to my score at the end here, depending on how fond they are of the show, but for a casual late-comer like me, I think it's a fine film with strong direction and likeable characters. Worth seeing on the big screen for the more artistic beauty shots, but fans will inevitably enjoy a home release when the time comes.

7
At times it threatens to become too maudlin for its own good, but it's a suitable send off for a popular and enduring series.