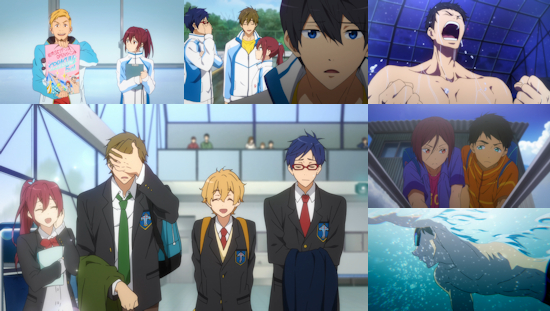 Every so often, we have a particularly unusual release strategy crop up here in the UK, and this is certainly one of them - at the time of writing, we don't have a home video release of the first season of Free, yet here we are taking a look at Anime Limited's release of its second series, Eternal Summer, which directly follows it. Thank goodness for streaming in this particular case, meaning that rather than having to talk around the need to "fly to Japan" to catch up with the show we can just point you in Crunchyroll's direction for you to check out the original series in either subtitled or English dubbed form.

Right, are you all caught up with the first series of Free now? I suspect you are, I can see a bit of drool hanging down there.

If you have genuinely watched that first series recently, you'll immediately notice the beginning of Eternal Summer mirroring the opening to that first season, before taking us straight to the pool to give us what we want - lots of swimming. You are watching for the swimming, right?

Joking around aside, the times are changing in and around the main cast of the series, and in particular for the well-organised members of Samezuka - with the third years preparing to graduate and leave, Rin has been made captain, providing a reminder that the members of Iwatobi Swim Club are also going to have to face up to some of their number moving on. Indeed, those set to graduate from Iwatobi have a lot to think about themselves pertaining to what their future holds, particularly in the case of Haru has he has to find a balance between his desire to "swim free" and making the most of his considerable talents in the water.

Eternal Summer isn't just about the characters we already know and love however, as there are newcomers to the scene - previous Samezuka captain's younger brother Momotaro provides some levity and comic relief, while more notably a new transfer student named Sosuke Yamazaki brings both old friendships and rivalries to the fore to underpin one of the major thrusts of the series.

It feels a little simplistic and reductive to simply refer to Eternal Summer as simply more of the same, but in broad terms that's exactly what this sequel provides and it isn't meant as a criticism - much like its predecessor, the series expertly blends more simple slice of life fare like school events and swimsuit shopping with big moments of character drama that rise to an impressive crescendo. However, with less time required for building up the setting and characters thanks to its incumbent cast, Eternal Summer does find itself with more time for character development - something which it leverages in a welcome manner across the entire cast of existing characters while still finding enough time to probe the newcomers.

All of this character work really comes to the fore when it pertains to the angst a number of characters feel over their impending graduation - the stresses inherent to this are excellently played out, particularly in Haru's case where his fears are realised with a wonderfully evocative dream sequence which reminds us that there's still turmoil and self-doubt beneath the character's seemingly simple desires. Other characters don't get quite the five-star treatment our protagonist does, but their fears and goals are still well represented and make for a compelling story with a suitably weighty (but not overblown) payload.

It probably goes without saying that Eternal Summer is a real visual treat - Kyoto Animation's prowess in their field doesn't need to be expounded upon, but even so we should draw attention to the show's fantastic swimming scenes, which are packed with a feeling of raw power finessed with technique and skill. There are plenty of other moments that will catch your eye, but nothing can beat this series in its poolside pomp.

Those competitive swimming scenes also mark a high point for the show's enjoyable soundtrack, which adds another layer to the energy on tension on show while fitting in nicely in everything else the series sets out to do. Meanwhile, the English dub of Eternal Summer has attracted criticism from some quarters, but worked just fine for me - yes, some of its pronunciations of names are a bit off and there are moments that grate, but as a whole it captures the spirit of the series well. Then again, I haven't watched the first season in English dubbed form, so your mileage may varied based on that.

Overall, Free! Eternal Summer ticks all of the right boxes - it's a great continuation of the first series, adding an extra layer of character and drama and proving to do its best work narratively when it zooms in on the pressure felt by a young athlete with a promising potential career ahead of it, while also providing plenty of enjoyable comedy and more relaxed fare as part of a package that sells itself on its gorgeous visuals alone. No doubt some will dismiss the series as a fan service show for those desiring lots of glimpses of chiselled, muscular male bodies, and while it certainly has plenty of that to offer there's also a lot of humour and heart to Free that all and sundry can enjoy regardless of their proclivities.

8
This second season of Free finds more time for character building and drama than its predecessor, which adds an extra dimension beyond the show's enjoyable comedy and delicious visuals.
COMMENT AND DISCUSS
blog comments powered by Disqus