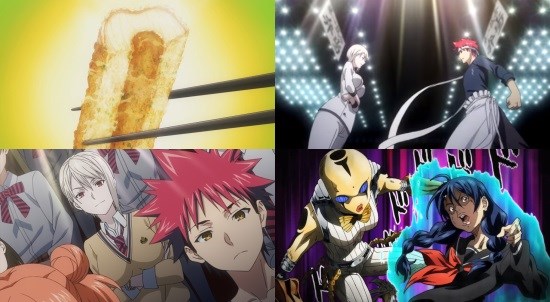 It’s no secret that Food Wars was probably my favourite show of last year bar Shirobako. Given this, the announcement of a second season made me scream like a little girl who’s just seen Justin Bieber walk into the room. More fun, more food-gasms, more cooking action than a whole series of Masterchef; Food Wars is back so let’s dig in once again!!

Picking up from last season we find the eight members of the autumn elections getting ready to face off in a series of duels following the heated elimination rounds. Each pair will be given a theme to follow to produce such mouth-wateringly delicious morsels that the judges will kill for another taste!

The thing is, much as it pains me to say it, in these first three episodes of Food Wars: The Second Plate have kinda flubbed it big time. The issue is that in the desperate rush to get into the food battles again, director Yoshitono Yonetani has thrown pacing out the window and that’s hit the show a lot harder than some people might have thought because it eliminates all of the set up and character work that gave the series tension. The first episode in particular is really lacking here, largely because the series for some bizarre reason chose not to adapt two whole chapters of the manga which occur between the two seasons which has all the set up for the cooking battle depicted in the episode itself. To compound matters the episode then references the events of these chapters regularly throughout, no doubt confusing the heck out of anyone who hasn’t read the source material. There’s also the issue that the previous series didn’t quite end in the way the manga did. Season one viewers will likely be under the impression that ‘Prince of Smoke’ Ibusaki had qualified for the tournament whereas the manga is much more explicit in confirming otherwise. The end result of all this is that these three episodes feel super-rushed, and content that season one would have covered over four or five episodes is crammed into three.

At least elsewhere the show remains good – the animation is still great and the food-gasm scenes are still hilariously brilliant with the familiar equal opportunity fan service in full swing, led by the Dean who determines winners by whether or not their food makes him strip! The voice cast are all back and are on fine form once again (though there’s not nearly enough Nikumi!!) and all the familiar music cues return flanked by some pretty good theme songs.

Unfortunately there’s not much else to say about these first three episodes, as aside from the three cook-offs nothing else is allowed to happen thanks to the breakneck speed with which the series is devouring the story. Perhaps this is due to the fact that this season is only 13 episodes long, possibly in an attempt to avoid overtaking the still-running manga, but in that case surely the way forward would be to make sure to pace things properly and include all the material? I hate to say it but this should have been a really easy sequel to get right and it’s been pretty badly botched. It's not unwatchable or bad by any stretch but it’s very much the Temple of Doom to the original series’ Raiders of the Lost Ark.

You can currently watch Food Wars in streaming form on Crunchyroll.

6
They've forgotten some of the ingredients and overcooked it.