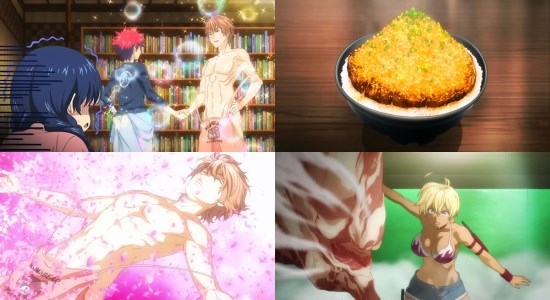 The last time I wrote about Food Wars I criticised it for having a simplistic structure, with the suggestion that the format wouldn’t last for a full series. Well, now the series is over so it’s time to look back and see if I was right. Let’s not beat around the bush and get right to the point... I was wrong. Food Wars didn’t need to change; it could sustain the format for a full series and I’m rarely this happy to be proven wrong!

Following his enrolment to the super-elite Totsuki Academy, Soma begins to realise that there’s more to this school than meets the eye. In fact, his initial impression that the school was full of talentless hacks who’d never cooked for paying customers and that there would be nothing for him to learn was drastically wrong. In fact he’s going to have to work hard to get to the top here; the better he does the more pressure builds as the school's top students, the ‘council of ten’, start to take notice – and not all of them are exactly rooting for him. The rest of the students are taking notice too thanks to his aggressive acceptance speech which makes him the enemy of talented cooks like the Aldini twins, not to mention the ongoing enmity of Erina who still can’t forgive him for passing her entrance exam. Starting with a cooking challenge just to enter his school dorm through to a challenge-based training camp that makes Master Chef look like an introduction to boiling eggs, Soma is going to have to really work for his spot!

Over its twenty-six episodes, Food Wars has rapidly become one of those really special series in the vein of Silver Spoon and Shirobako, in that whilst you’re watching it you are so thoroughly enjoying yourself that when the series comes to an end you have to stop and try and remember what it is you actually used to do on a Friday evening before the show started, because you can’t quite think of anything you want to do other than keep watching. Series director Yoshitomo Yonetani has proven that he’s extremely adept at what he does. and despite the seemingly repetitive format he has such brilliant balance over the characters, comedy and dramatic elements that an episode where the entire run time is taken up with people eating can become utterly enthralling. He’s helped of course by the fact that the original work by Yuto Tskuda is so strong and provides such great material to work with, but there’s no denying that he knows what he’s doing here.

The characters are incredibly fun to watch interact with each other. Soma himself still walks that fine line that stops his arrogance making him a hateful character and stays entertaining and likeable throughout the series, and because of that he’s a huge part of why the series works.  This is bolstered by the other characters like Takumi Aldini, whose one-sided rivalry with Soma never gets old, or the fantastic yet criminally under-used Ikumi who manages to quickly become more than just the token fan-service character her design indicates her to be. Speaking of fan service: well, yes there is a lot of it throughout the series and it has been one of the things that the show has been criticised for elsewhere. However I feel this is a little unfair as one of the most hilarious things about the series is not just how inventive the fan service can be (some of the so-called ‘foodgasm’ sequences are utterly, brilliantly bonkers) it’s that it’s also absolutely equal opportunities fan service - in every episode you’re just as likely to have one of the men having their clothes explode provocatively as one of the ladies. Heck, Ishki spends almost the whole series sporting the ‘naked apron’ look! It’s certainly unfair to put the show down to much because of this; in fact it’s one of the shows strengths.

Visually the show holds up really well, whilst sometimes the backgrounds are a little plain the characters look great and frankly its a school-based cooking show which doesn’t need Bakemonogatari levels of detailing to everything. The budget is clearly well-spent on making sure the show's main selling point – the food – looks sumptuous and mouth-wateringly good. They even do a whole arc on curry, one of my most hated foods and I was still drooling! The cast do a great job at bringing life and energy to their characters (it’s worth noting that this is also one of the crazy number of shows that Maaya Uchida – Gatchaman’s Hajime - has been working on of late) and really contribute to just how likable most of them are. Well, apart from Shinomiya, but you’re supposed to want to boo the bad guys!

So, as they say on Great British Menu, onto the scores. Frankly the number below is one I struggled with long and hard because I, as you may have guessed from the above love letter above, adore Food Wars and the temptation to just stamp that elusive 10 into the score box was high. The show is utterly brilliant but when I force myself to step back a little does it hold up as it should? Well... yes it does. The show is unfailingly entertaining throughout its entire run, all of the gags work consistently, it has good animation quality and the music is great (and incidentally available on iTunes) and by the end of it you’re gagging for the just-announced second season. It may not have the depth and tear-jerking drama you get from other shows, but I honestly cannot find fault here and I whole-heartedly recommend you sit down and watch every glorious second of it.

10
A 26-course banquet that still leaves you hungry for more.