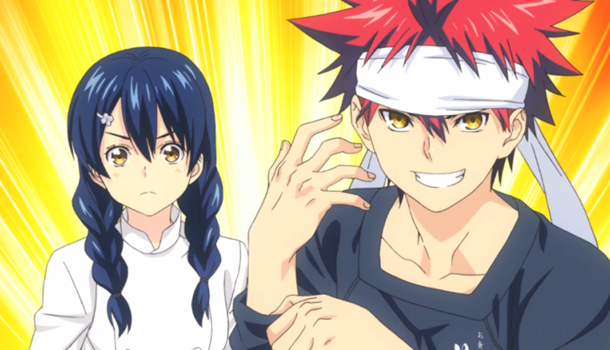 The phenomenon that is Food Wars! (or Shokugeki no Soma) has long been praised around UK Anime Towers, with the streaming series being awarded a show stopping 10 out of 10. With this in mind, I set out watching this series with high expectations: Anime and Food sounds like an unbeatable combination!

The series centres around Soma Yukihira, a fifteen-year-old boy whose dream is to surpass his father’s culinary skills and take over the family restaurant. Due to his father disappearing halfway across the world, Soma ends up at the Totsuki Academy. This is the best cookery school in Japan, and is dedicated to producing the next generation of world-class chefs. Soma finds himself to be a commoner amongst the elite, becoming the only transfer student to pass the culinary challenge set by Erina ‘The God Tongue’ Nakiri. Having immediately taken a dislike to him Erina failed Soma. Though this decision was subsequently over turned by her grandfather, the director of the academy. While Soma has no appreciation of the finer points of gastronomy, he does have an astonishing understanding of ingredients and how they can be combined to create incredible dishes. Due to his strong self-belief, even his friends and peers often view Soma as arrogant and cocky - with Erina’s instant dislike of Soma, his time at Totsuki looks set to be difficult.

During his first class at Totsuki, Soma is paired up with Megumi Tadokoro. Megumi is a mild mannered individual who is only a single ‘E’ grade away from being expelled. Early on it becomes clear that a special relationship is set to form between Megumi and Soma. Soma takes up residency at the Polar Star Dormitory, but only after he has cooked a dish which satisfies the caretaker: Fumio Daimido. During the welcoming party Soma is introduced further to the academy’s inner workings by Satoshi Isshiki. Satoshi is the 7th seat of the Elite Ten, the highest decision-making body in the school other than the director of academy.

It soon becomes clear that the basic premise for everything related to Totsuki Academy centres around competition - Totsuki Academy is famous for its shokugeki or food wars, and the price of losing is often expulsion from the academy. Given that only 10% of students graduate from the academy, they face a series of increasingly tough challenges. The first major hurdle for all first years is the training camp, which is judged by alumni - with half of the students set to fail, and therefore be expelled, the stakes are high. After successfully negotiating the camp the next challenge for Soma, Megumi, and the rest is the Autumn Selection. The Autumn Selection begins with a cook-off, where the 60 selected students are split into two groups, each cooking a curry dish with the hope of getting through to the tournament stage. Unlike the training camp, failure does not lead to immediate expulsion.

I love the premise of Food Wars! – it has lots of key ingredients, which have the potential to make a great show: Food, likeable characters, the underdog rising to the top and so on. But and this is a big BUT the whole show is ruined by ‘foodgasms’. A ‘foodgasm’ relates to the reaction of a character after they have eaten food in the show. Essentially, it involves the individual getting naked and behaving like they are having an orgasm. Before you accuse me of being a prude, I love a bit of Great British Bake-off innuendo, but this is over the top and simply doesn’t add anything to the series. In fact, it could be said that the fanservice in Food Wars! is verging on the offensive. I fully understand that this is a way of visually demonstrating how good the food is, and I get why this may appeal to some. However, for me, it simply ruined my enjoyment of the show and by episode 3 my desire to watch had drastically diminished. Fanservice is always going to be controversial area, so be warned that it’s not going to appeal to everyone.

The animation is consistent throughout and the attention to detail when it comes to displaying the food is brilliant, I also love the way they explain how the dishes are produced. The characters are well designed and each has their own unique defining features and quirks. The cast is highly likeable and arguably contribute to the overall quality of the series. The relationship between the two-main protagonists, Soma and Megumi, complement each other brilliantly. They are supported by an extremely colourful array of individuals, while some lack any real depth they are at least memorable.

There are some issues with the English dub, which means many jokes that would be funny in Japanese are either lost in translation or become so blunt that they are no-longer funny. For example: Ikumi Mito, the meat master as she is known, has the nickname Nikumi in the Japanese audio. Niku is the Japanese word for meat, hence the joke. Mito also sounds a like meat in English, so this has been translated in the English dub as Meat Meat! What was a subtle play on words has been lost and simply isn’t funny anymore. In addition, the voices of the characters in the dubbed version do not match their personalities. For me, the voices of Ikumi and Erina are the wrong way around.

In conclusion, Food Wars! is one of those marmite anime shows – you’ll either love it or hate it. Food Wars! is an anime which combines Masterchef and The Great British Bake-Off. The premise of the show is great and, putting the over the top fanservice to one side, it is executed perfectly.

6
A fun and unique series which comes with heaped spoonful’s of fanservice, that won’t be everyone’s cup of tea.
LATEST REVIEWS