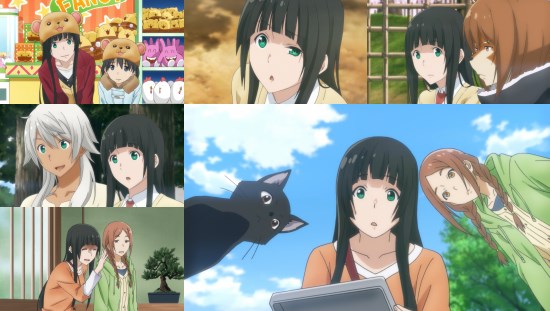 Historically, I have a troubled relationship with the so-called "iyashikei" genre - whether it's the quiet rural comedy of Non Non Biyori, the whimsical photography club of Tamayura or the water-laden Martian utopia of Aria, shows that promise to heal my aching soul always seem to have the opposite effect. Rather than calming me, the uneventful quiet of these shows always sends my blood pressure soaring in barely concealed irritation at the lack of anything meaningful panning out before me.

With that in mind, I approached Flying Witch with more than a little trepidation this spring - with the promise of a gentle, easy-going story and an idyllic rural setting, I was getting flashbacks to a spell of fidgeting impatiently on a sofa having been persuaded to watch some of Non Non Biyori. Yet, here I am, five episodes into Flying Witch, and not from watching out of obligation to write a review - I'm genuinely loving it.

The concept for the series is simple enough - teenager Makoto moves out to live with her cousins in a sleepy town in Aomori, wherein she seeks to continue her training... as a witch. Yes, she can ride a broomstick and yes, she has a black cat as her familiar, but Makoto isn't your stereotypical cackling witch who spends her time toiling and troubling over a cauldron, but rather a decidedly normal young girl (albeit one with a very poor sense of direction).

Conversely, Makoto's existence as a witch isn't classified material either - it isn't something she openly advertises to all and sundry, but it's more of an open secret amongst those close to her that she doesn't bother hiding to her cousins or their direct friends. Once the immediate shock or delight of this revelation is out of the way, any supernatural occurrences surrounding Makoto are largely taken at face value by those around her, and as a result by the viewer. One of the locals has been turned partially into a dog? Sure, that seems fair enough. There are weird screaming plant-like creatures that you can dig out of the ground if you know where to look? I can buy into that.

It's this ability to combine the normal and the absurdly supernatural that is (if you'll pardon the pun) the true magic of this show, and I suspect what ensures that it rises above other similar series in my estimation. Makoto's powers as a witch (and those of her sister who puts in some wonderful but decidedly occasional appearances) add a real frisson to proceedings, whether it's adding a surreal bent to the mundanity of a near-deserted town or becoming the outright focus of whatever is going on around Makoto. The magical dimension of the series opens up plenty of new avenues for comedy and accentuates the relationships of the cast, but never runs roughshod over the simple joys of watching the interactions between characters which feel natural even in the most surreal of circumstances.

It's at this point that I could easily descend into giving you examples of where this blend works so well, and telling you about "the bit where", but not only would these moments not translate well into text it would also spoil the simple pleasure of discovering the joy of Flying Witch for yourself, so you'll just have to trust me when I tell you that this is a series that will make you laugh out loud on occasion, but will more often than not simply leave you with a big smile plastered on your face.

The sense of fun exhibited by the series is also helped out tremendously by its animation style and quality - the show's characters are appealing without having to rely on outlandish designs, and all of them prove to be suitable expressive in terms of both facial expressions and body language to help but across whatever is required of them. In particular, Makoto's younger cousin Chinatsu is a wonderful example of this - a childish ball of excitable energy who is simultaneously often wary of the unknowns that this trainee witch brings into her world. Her reactions and view of the world is a rich vein that the show mines frequently, providing many of its highlights in the process.

The broader aesthetic of Flying Witch is also very pleasing - it isn't the first series to take in an idyllic rural setting as we've already mentioned, but it does a great job of giving its quiet streets and parks a sense of appeal, and even a kind of familiarity even as someone who has never visited the area. Coupled with its characters and mindset, the various elements of the show meld together in a most pleasing fashion, with decent music and voice performances rounding out the package.

In closing then, Flying Witch up to this point definitely does much of what you'd expect of a "healing" anime series. However, it also exhibits enough of a thrust to its humour and characters to break away from being simply a show where nothing happens, and uses its magical trappings well in this regard to mark it out as something unique. While other shows in this genre have left me tense and frustrated, I can't argue with the soothing qualities of Flying Witch in contrast to this - here is a series that can ease away my pains after a long day at work and leave me smiling and feeling just a little bit better about the world... and who doesn't want that kind of influence in their life?

You can currently watch Flying Witch in streaming form on Crunchyroll.

8
A gentle, soothing series that still has enough unique aspects to it to provide fresh and funny comedy.
LATEST REVIEWS