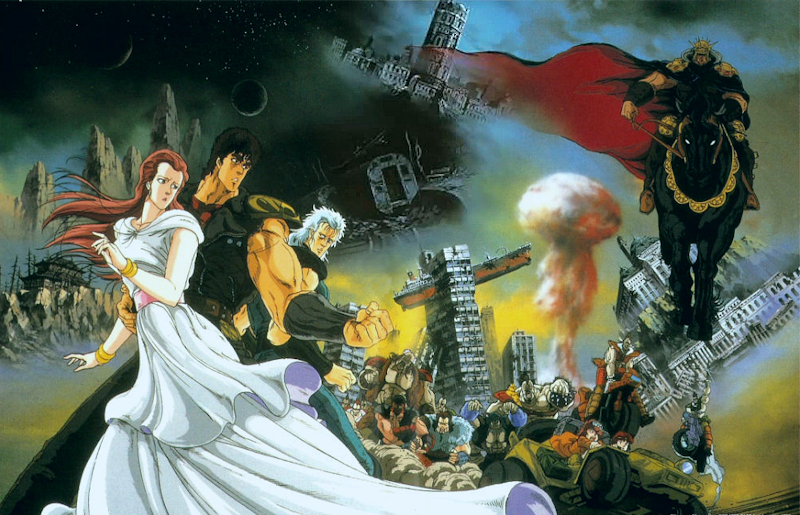 Fist of the North Star is one of those anime that everyone claims they hate, yet it is still one of the most popular and recognisable series around. Its mixture of spaghetti-western settings and head-exploding ultra-violence have charmed audiences for 2 decades now, so this box set has come just in time for it's 20th.

For those unfamiliar with this, it follows the story of Kenshiro, a successor to an age-old martial art known as Hokuto Shin Ken. After being betrayed by one of his best friends Shin, who took Ken's woman Julia and left him for dead, he wanders the post-apocalyptic desert searching for Shin so he can get his Julia back. Of course Shin has an entire army of henchmen for Ken to fight his way through, and of course he makes many friends along the way.

The animation is now 20 years old, so it's pretty obvious it's not going to be the best in the world. All the old corners are cut, but the fight scenes still remain a lot more interesting and imaginatively violent than anything the likes of Dragon Ball have to offer. Interestingly, most of the head bursting takes place as a silhouette or has had it's blood colour changed to black. It makes it all seem a little silly, but I suppose it is a TV series, so we can't really expect much more than that.

The dub is surprisingly rather good; most anime of this type is given a shoddy quick dub, with none of the voice actors really caring about the characters. Here the characters voices are suited well, and it has had its soundtrack completely changed so that it stands up well to today's standards. FotNS' drum & bass soundtrack by Reinforced Records fits with the show rather well, and purists may hate it, but I think it helps to give the series a slightly more serious tone to it.

Luckily for fans of the classic Fist of the North Star, Manga have released all 36 episodes (that they have the license to, anyway) in one very big box set. 6 DVDs, only £34.99! That has to be the best value for money on an anime box set ever FotNS fans should thank Manga very much.

7
It does show its age, and many probably won't like it, but I think it has an odd B-movie charm, and I hope many will agree.
COMMENT AND DISCUSS
blog comments powered by Disqus