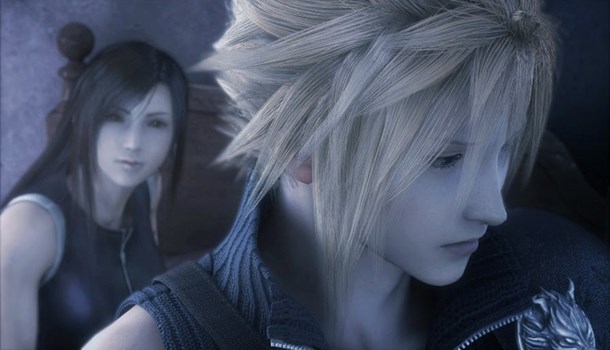 I never finished Final Fantasy VII. There. I said it. I got to the bit on the first disc where the plate above a section in Midgar was about to fall down. That was the first disc. I’m told that’s really early on in the game. I’ll get back round to it…eventually. But here we have it. After what seems an unbelievably long wait, the movie sequel to FFVII has arrived and it’s quite the action-fest.

It’s been two years since Cloud Strife kicked arch villain Sephiroth’s arse. The world is in the process of recovery and our heroes have gone their separate ways. A sickness is now starting to affect some of the populous and now three brothers have appeared seeking their “mother”, causing trouble for Cloud in the process.

This is a film aimed squarely at fans of the original series, and anyone unfamiliar with the game will find themselves a little lost. Characterisation is almost non-existent, but it could be looked upon as a major credit to the game that those of us who played and remember these characters still care, and that’s seriously impressive. Unfortunately the plot is similarly reliant on some prior knowledge, and that makes the film somewhat flawed. Happily the extras on the 2 disc edition have a compilation of cut scenes to refresh our memories, and bring newbies up to speed with events, so at the very least this shortcoming has been addressed.

The first thing that hits you in the face going at the speed of a bullet train is the CGI. This film really is a sight to behold. The incredible amount of detail on the characters, the scenery and the silky smooth animation is stunning, with a wonderful soundtrack that adds power and poignancy to the visual flair. Even 5 months after my first taste of the film, I find myself humming One-winged Angel on occasion…

Sadly, visuals aside, the film lacks a meaty plot, and this leaves something of a hole. The plot is really just a series of jumpy set pieces, moving from one fight/chase sequence to the next, and while they are highly charged action affairs, nothing is really explained.

Extras wise there are the usual deleted scenes, making of (though this is actually quite interesting) and trailers for the film. On the first disc you have the main plot from the game cut down from its 40-50 hours of gameplay to about 22 minutes of reading subtitles and listening to familiar music from the game. While its nice to see where the film came from and the old-skool PSOne cut-scenes and graphics, it’s still a very confusing affair and does little to help the uneducated.

In the end, FFVII:AC was always going to a FFVII fan’s dream. It shows all the characters from the game, even if they are incredibly brief in most cases, and tries to give the fans what they wanted (well, what the fans wanted that didn’t involve remaking the entire game again). If your not a FFVII fan, never played the game or any Final Fantasy game, then the beautiful CGI and high-octane fight scenes may perk your interest, but don’t expect to understand what’s happening on screen.

Worth the wait? Maybe, if only to show that Square Enix could outdo Pixar if given a decent script.

Disc 1 contains a video collection from the original PSOne game to bring the viewer up to date with events (although the Japanese exclusive anime short, Last Order, would have been more welcome), whilst disc 2 contains a making of documentary, a short film about its appearance at the Venice Film festival and some deleted scenes. All in all, a nicely rounded package.
6
One for the fans, but it lacks substance and suffers accordingly.
LATEST REVIEWS