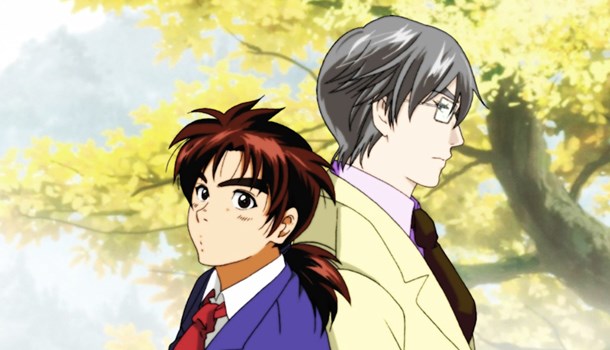 Murder! Kidnapping! Missing diamonds!  There’s truly nothing like a good detective show to get the grey matter working as the clues are laid out before you and you race to work out who the bad guy is (the butler, the ex-wife or anyone with a moustache who isn’t Poirot in my experience...) before the dashing detectives uncover the lynchpin that will set the dominos tumbling. This season sees the return of Hajime Kindaichi, one of the longest-running detectives in anime and manga. He’s been around since 1992 with a slew or cases to his name across dozens of volumes of manga, over 140 anime episodes and even forays into live action. Now for the first time (bar some long out of print Tokyopop manga) the world can get in on the action, as Crunchyroll are airing the latest series – The File of Young Kindaichi Returns - as part of the new season. So strap on your deerstalker and let’s catch some killers!

Hajime is a highschooler who is the grandson of a famous detective, and he seems to be doing fairly well in the family business. Along with walking camcorder Ryuta and love interest-cum-damsel in distress Miyuki he tends to find himself deep in the middle of bizarre crimes to which his detective skills are the answer. Don’t expect a particularly thorough introduction to these characters though, as this is a sequel series which expects its viewers to have seen or read the cases that have come before it. There doesn’t seem to be much in the way of back-story that you’re required to know and you can pick thing up fairly easily, but the series does essentially jump straight in. Across these first three episodes (and at least the fourth) the gang find themselves in Hong Kong in the middle of a secretive race for a legendary treasure that people are willing to kill to obtain. Bundle in a young model who could be Miyuki’s identical twin, a tattooed treasure map and a bomb and we’re all set for another classic case.

Or at least we would be if the show had been made by people with a good sense of story structure, character or pacing (this is series director  Yutaka Tsuchida’s first time in the big chair... oh dear), but sadly there are some pretty major issues at hand here. The cast of characters we’re dealing with are bland in every sense of the word, essentially serving a single function in the story besides looking surprised when Hajime makes an pronouncement. Hajime himself in particular is as uninteresting a lead as you could find, seeming to have no discernable character traits whatsoever. Admittedly there could be something in the past 140-odd episodes that gives you some kind of reference point as to how these individuals behave, but it certainly doesn’t feel like it. The result is a total lack of empathy towards any of the characters as they plod along.

This might have been alleviated somewhat if the plot itself was any good, but it’s been utterly mishandled. The pacing is all over the place but generally suffers from an utter lack of any urgency - within minutes of his friend's kidnapping, Hajime is calmly relaxing in a hotel and having dinner followed by a fireworks display. Later on, the discovery of a bomb is met with a similar matter-of-factness. There’s also a huge feeling that everything is too convenient - no-one seems to do any actual detective work as opposed to things either coincidentally happening whilst the cast are present or Hajime making an assumption based on no evidence which he then magically proves to be correct. It’s as if someone wanted to use the kind of quick-fire deduction used by Sherlock Holmes but then forgot to add in all the bits where Sherlock notices the evidence that allows him to make the deduction. There’s also the little matter of how everyone from strangers to seasoned police officers unquestioningly accept the presence of high school students at crime scenes and then start taking orders from them too. The overruling answer which might be given for all this is, one suspects, that "it's just a kids show" but whilst the whole thing does indeed feel like it’s aimed at a pretty young audience, is that really an excuse  these days? I’ve seen episodes of Doraemon that do a better job than this! I haven’t even gotten to the sub-standard animation or the unforgivable sin of showing a clip reel of the episode that you’re about to watch at the start of each episode yet...

Frankly, the sole reason I’m feeling at all lenient towards the series is the nagging suspicion that I may have been spoiled by a glut of great detective shows on TV from Inspector Morse to Jonathan Creek, which may have set my expectations too high and perhaps made the flaws in the series stand out much more than they may have otherwise done. Even taking this into account though, I can’t find a good reason to recommend the show when everyone has such easy access to a slew of superior detective fare.

You can currently watch The File of Young Kindaichi Returns in streaming form on Crunchyroll.

4
The only thing you'll be investigating is why you bothered.