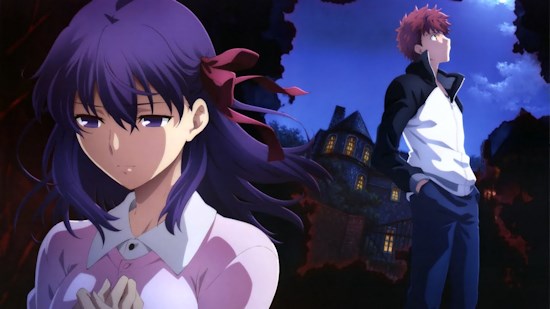 Heaven’s Feel: Presage Flower is the first in the trilogy of movies set to follow the Fate/Stay Night game’s Heavens Feel story, the third and final route in the series.

The story follows young mage Emiya Shirou as his normal high school life is interrupted by a secretive war for control of a wish-granting device named The Holy Grail. In the Heaven’s Feel timeline, Shirou forms a strong bond with his childhood friend, Sakura Matou, which will be affected by both the Holy Grail war and Sakura's vile brother Shinji.

Unlike previous adaptions of the Fate/Stay Night series, Heaven’s Feel has a lot less action at first, with the movie showcasing the beginning events of the first two Fate/Stay Night storylines before entering the Heaven’s Feel path. At first it appears as if the movie is following in the path of Unlimited Blade Works, as Shirou learns about the Holy Grail war and spends time with the mage, Rin Tohsuka. However all of this quickly changes when a dark mass appears in the midst of a battle between servants Berserker and Saber, marking the beginning of Heaven's Feel's dark and twisted story. However, at least in the first movie, this dark presence is not the anime's lead antagonist. That role falls to Zouken Matou, a powerful mage that currently rules over the Matou bloodline, who is driven by his lust for immortality which can only be achieved through the Holy Grail.

As with previous Fate anime and movies, the music in Heaven’s Feel is incredible, with a varied OST that continually melds perfectly with character dialogue, combat, and panning shots of the stunningly animated Fuyuki city. The main OST is composed by the incredibly talented Yuki Kajura, with the OST being a major factor in the intensity of every single conversation and battle. The soundtrack features foreboding and ominous music that is juxtaposed with much lighter and more positive score that accompanies the lighter slice of life scenes, such as those where Shiroi and Sakura eat meals together or walk home from school, unaware of the brutal magical war that will soon engulf them.

However, what makes the movie's battles, conversations, and relaxing scenic shots so stunning is the animation that accompanies the soundtrack, with 2D animation and CGI being seamlessly mixed together to create fast-paced and action-packed combat scenes that shows the sheer power held by the summoned servants, as well as giving a sense of scale as they fly across rooftops and duel on towering structures. This also helps to create a much darker atmosphere which is very fitting for the Heaven’s Feel story. Most of the movie's battles take place at night using a mix of CGI and stunning 2D animation to create a contrast between the exchanging attacks and the dark moonlit background of the Fuyuki night sky.

Conclusion:
Although this first act starts off slow, it develops the characters well whilst introducing a new threat and seeing the return of an old one. Heavens Feel 1: Presage Flower should act as an action-packed introduction to the storyline before the following two movies begin to delve into the complex twists that occur in the timeline. Despite the beautiful Animation and soundtrack, I do not recommend watching Heaven’s Feel if you have not seen any of the Fate series prior to this, as the film expects viewers to have a substantial amount of prior knowledge of the Fate universe before diving into this third and final storyline.

8
A slow start with a strong finish, this is a film that rewards fans with the darkest and deadliest tale of the series!