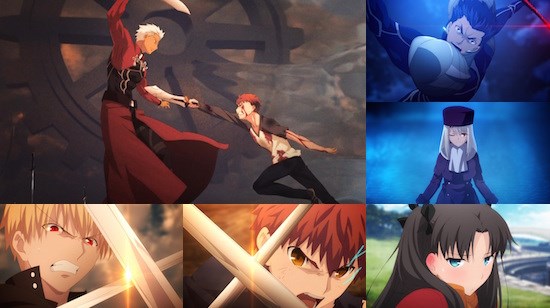 Regular UK Anime Network readers will no doubt recall that we took our first look at Fate/Stay Night: Unlimited Blade Works back in December 2014. Now, some twenty odd episodes and six months later, it’s finally time to tackle the rest of the series.

The remaining episodes follow Rin and Shiro’s trials and tribulations in the Holy Grail War, as they battle some of history’s greatest heroes. There is no shortage of action to be found here - if action, swords and sorcery are your thing then this is undoubtedly the series for you. There are plenty of twists and turns packed into these episodes, with deception and betrayal around almost every corner. This includes a few genuine surprises, though most are telegraphed long before they are fully revealed. This series isn’t shy about killing off it’s characters either; the blood flies with almost as much regularity as the spears and swords which draw it. There is quite a dark streak running through the series, which adds a real depth along with a sense of danger and peril to proceedings. That’s not to say the series is all doom and gloom, there are lighter moments scattered around which punctuate the darkness perfectly, providing just enough relief to prevent the series getting bogged down in the gloom. In that vein Rin and Shiro’s almost comically tempestuous relationship continues to develop throughout the series, and the answer to the usual anime “will they, won’t they?” quandary thankfully proves to be a lot more definitive than we’re used to these days.

Fate/Stay Night: Unlimited Blade Works continues to be simply beautiful to behold - the battle sequences in particular are staggering and could easily be described as works of art in motion. Some people have even begun referring to the series as “Fate/Stay Night: Unlimited Budget Works” due to the high cost of producing a series with such consistently high animation quality. The soundtrack too remains extremely well suited to the series, punctuating the dramatic, and even the not so dramatic, moments perfectly. These two points alone add up to one inevitable conclusion: this is a series that is crying out for the full HD Blu-ray treatment, and we hope that MVM Entertaniment won’t make us wait too long for exactly that.

However, if you start to look too deeply beyond all the prettiness the cracks begin to show in the series’ admittedly gorgeous veneer. Fate/Stay Night: Unlimited Blade Works boasts a brilliantly complex storyline that so very nearly pulls off everything is sets out to achieve… but not quite. There are numerous moments where you will be left scratching your head wondering: “What just happened?”. It is only if you start to delve into the wider Fate universe that some of theses events begin to make sense. The series almost needs it’s own companion encyclopaedia to explain those head scratching moments to viewers who aren’t already steeped in the lore of the Fate Universe. This means that prior knowledge of the universe, and in particular the Fate/Stay Night visual novel, is a prerequisite for fully understanding the story of Unlimited Blade Works, though thankfully you can still enjoy most of the series without a full understanding of it.

Even for those viewers who are already up to speed with the visual novel there are still a few imperfections to be found here and there, though admittedly nowhere near as many. The prime example of this is one of the battles in the final third of the series, which spans multiple episodes. It is one of the most important battles in the series, the fight is beautifully animated, tense and full of emotion as you might expect from a pivotal moment in the series. However, it is also a masterclass in verbose dialogue and is dragged out for much longer than it has any right to be. Indeed, some of the battles on show here are reminiscent of Dragon Ball Z, a series infamous for padding out battles far beyond any reasonable person’s patience. You will almost certainly find yourself screaming at the screen for them to “just get on with it”. This isn’t the only time where Ufotable are guilty of padding out episodes either, though it is easily the most egregious. Of course the most galling thing about all the padding is our prior complaint, that there is information missing from the series which could make a big difference to the viewing experience, and there could have been much more information imparted to the viewer with the time wasted by Archer’s seemingly endless monologues alone.

Back in our initial look at the opening few episodes we mooted that “justice had not quite been done to Type Moon’s beloved visual novel” in the previous Fate/Stay Night anime adaptations. I think it’s fair to say that justice has not been done here either, at least not for those who aren’t already familiar with the source material. There are parts of this adaptation which will make little or no sense to anyone who is not already steeped in the lore of the franchise. It may simply not be possible to squeeze the entirety of Fate/Stay Night: Unlimited Blade Works into an anime series -that said, Ufotable have still done a fantastic job here and their effort sits head and shoulders above the rest. There are thankfully a multitude of redeeming features in this adaptation which make our complaints more annoyances than deal breakers. What that leaves us with then is an action packed, staggeringly beautiful, and narratively ambitious, but ultimately flawed series.