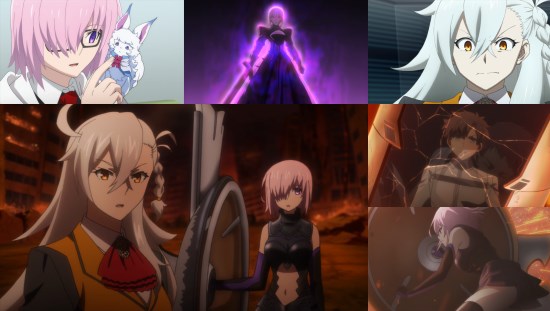 For many years now, the Fate franchise has held a place in the hearts of many fans - in site of the Fate/stay Night visual novel that started it all never getting to enjoy an official western release, fan translations of said game alongside a growing phalanx of anime adaptations and spin-offs have ensured it retains its place as a hot property both inside of Japan and out.

Given that enduring popularity it was only a matter of time before someone's eyes turned into Yen symbols as they imagined a mobile game based on the Fate universe, and so Fate/Grand Order came into existence, using that universe's system of Masters and Servants to persuade you to spend your time grinding away and throwing money into a big virtual pit in the process. To say that the game has been a big success in Japan would be a rather large understatement, and it's popularity has fed back into the creation of this anime adaptation. Just be thankful that the game itself isn't available in English at the time of writing, so you can just watch this feature-length special, nod approvingly, and then steer well clear of losing all your money to a so-called free-to-play game.

Anyhow, this special episode of Fate/Grand Order lands us in the midst of 2016 (which is so last year), but also sees the future of humanity in something of a pickle - the Chaldea Security Organisation, created to monitor and ensure mankind's continued existence, has measured that events in December of 2016 will wipe humans off the face of the world. Of course, this is the kind of news which makes even last year's biggest headlines seem like no big deal, and leaves the organisation scrambling to prepare countermeasures to try and put humanity back on track.

Needless to say, this is done with an engineered equivalent of the Master and Servant system we know and love from the Holy Grail Wars, using technobabble nonsense such as Rayshifting to take potential Masters and plonk them into a troubled location to summon Servants and save the day. All of this is overseen by Olgamally Animusphere (aka Rin Tohsaka 2.0), who has little time for the arival of a half-baked milquetoast new recruit (he is a Fate protagonist after all) named Ritsuka Fujimaru. When Ritsuka dozes off during his first mission briefing, he's duly sidelined... a decision which actually saves his life, as a disaster befalls the Chaldea organisation's headquarters and wipes out all of his colleagues.

Thus, it's left to Ritsuka, Olgamally and unusual fellow staff member Mashu to save the day, as they're dropped with little preparation into none other than Fuyuki of 2004 in the midst of its Holy Grail War. While this is never going to be the safest of locations, something is amiss which makes things all the more dangerous, as it seems that Saber has gone rogue and has taken the other Servants into her employ for whatever nefarious plans she has in mind. Defeating King Arthur is a big ask for our ragtag trio, and it's only the start of an even more challenging situation which reveals itself come the end of the episode.

On the surface, First Order certainly ticks a lot of the boxes you'd expect of a Fate spin-off, managing to fill its plot with a whole lot of babbling nonsense that ultimately all sounds really cool somehow, then throws in all of the more traditional plot points around Servants and a Holy Grail War for familiarities sake. Indeed, this opening gambit very much plays to the crowd of existing fans, throwing in some well-known servants and a handful of other nods and references that will keep the Fate/stay Night fans happy.

The same can be said for the other aspects of this production - Lay-duce's efforts can't compete with Ufotable at their finest for Unlimited Blade Works, of course, but the show's production values and solid and actually exhibit some moments of nice animation that at least maintain the basic feel of other mainline Fate instalments in terms of overall style. Add to that some nice character designs that offer fresh twists on Servants you already know while also throwing some new ones into the bargain, and First Order is actually pretty pleasing visually.

In terms of its plot Fate/Grand Order isn't as refreshing (or perverted, mind you) as Prisma Illya, and could almost be seen as a little too staid, but there is something to its core conceit that managed to hook me in for this opening gambit, and it's left itself with a sufficiently broad yet interesting canvas to leave me ready for more as a work that hits the right notes laid down by its predecessors but with just about enough new wrinkles to not be a rehash of other Fate series. Admittedly, that isn't sufficient for me to dive into the mobile game (I'll leave that for one of my colleagues to continue to suffer with - hi Elliot), but I definitely wouldn't say no to more of this anime take on things were it to be served up to me.

Ultimately, that's probably how best to surmise the existence of Fate/Grand Order - it isn't going to blow you away or make you look at the Fate universe in an entirely different way, but it will give you a fresh serving of many of the things you enjoy about the franchise (and potentially some of the things you don't) in a broadly appealing package. This 70 minute long opening gambit perhaps feels a little rushed to squeeze into its short feature time in places, and exists as something that could probably have been spun into a full-blown TV series in its own right with its various elements given more care and attention, but what is here is ultimately pretty satisfying to watch.

You can watch Fate/Grand Order -First Order- in streaming form on Crunchyroll.

7
A solid new spin on the Fate universe that ticks all of the right boxes and presents a satisfying story in its own right.
LATEST REVIEWS