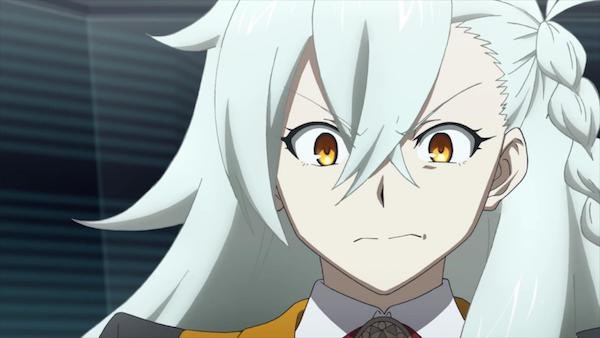 I am thankful sometimes that I managed to stop myself from spending time on the money pit which is Fate/Grand Order. For those not in the know, it is a smartphone role playing game available on all major operating systems. And while it is free to play, it really isn’t, as the only way to actually progress is to spend a bit of cash to get a chance to roll for good characters. Yes, Fate/Grand Order is a Gacha game. Oh for the ability to roll a character which you actually want, power them up and defeat your foes in the turn based battle.

Anyway, I digress. Fate/Grand Order: First Order is a feature length animation which is based on the prologue produced for this game. It acts as a kind of introduction to the game and gives us a lead into the Grand/Order universe.

It starts in a room, where our protagonist awakens. He is inside a large secure facility high in the mountains, where the security organisation Caldea has its headquarters. This organisation has been founded to monitor and preserve humanity and to ensure mankind’s continued existence into the future. In the centre of the compound is a reproduction of the planet Earth which acts as a “model” to assess and predict the future. In theory humanity is guaranteed to live for another 100 years, clearly a world where Trump wasn’t elected as President of the USA.

Except, something happens and the future becomes cloudy. With humanity seemingly set to become extinct in a couple of years, due to the events which occur during a “singularity” event during 2004 in Fuyuki City. All of this malaise is due to what happens during this event, and so the organisation arranges to send agents back to resolve this singularity. Caldea have the technology to convert its agents - those who wield magical power and are thus capable of becoming a master - into servants (spirit particles) and transmit them through time. This is a similar kind of conversion which occurs during Fate/Extra which, I think, is in the future - assuming that this timeline is actually linear which, knowing Type-Moon, it probably isn’t. After an explosion in the facility, our protagonist finds himself the subject of a conversion into spirit particles and is sent to the past, with an interesting companion: Mashu Kyrelight. Mashu is a bit of an odd duck. Having known her for only a matter of hours after waking up, our protagonist gets quite close to her and they form a close friendship. However when she is hurt badly in the explosion, he tries his hardest to save her and a contract is formed. After arriving back in 2004, our protagonist is now joined by a servant, a shield-wielding beauty who turns out to be Mashu. Together they must fight to resolve the singularity and fulfil their Grand/Order: to preserve humanity.

So we need to be quite clear here: Fate/Grand Order: First Order is not a new Fate anime series, unfortunately. It is purely a tie-in to the game and introduces the main villain, who seems oddly obsessed with destroying mankind using the power of the Holy Grail. What is most interesting is that in the final moments of the anime you see the other servants chosen throughout history, in the other singularity events which Mashu and her master now need to resolve, and amongst them are some of my favourite historical figures turned servants (Nero Claudius for those who don’t know). Unfortunately to continue the story you need to play the game, and I simply refuse to do that.

For a short feature length animation the quality perhaps isn’t the greatest. It lacks the polish that Unlimited Blade Works had under Ufotable and is similar to the original Fate/Stay Night animation by Studio Deen. The voice acting is passable in both Japanese and English and, while the animation is short at a little over 70 minutes, the story moves very quickly, with a couple of rather cool battles against Saber Alter and her corrupted compatriots. The story and the writing lacks depth in my opinion, but considering the length and the quantity of story to be covered, this isn’t surprising. It is however long enough for me to think that Mashu is a complete cutie!

Fate/Grand Order: First Order is a good little film but I quietly wish that it was actually the start of a new Fate series, rather than just an opening for a game that I personally will never play. Alas, it's unlikely that we will see a sequel any time soon. However if you are one of those who are interested in sacrificing their life and sanity to enjoy a hard-but-fun role-playing game, then this film is a good introduction. Either way it's worth checking out, if only just for Mashu’s smile.

6
A short lived introduction into the Fate/Grand Order universe.