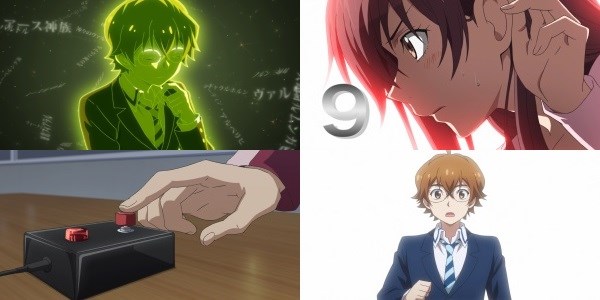 Question time: What would you consider to constitute a sports anime? Does it require a sport with physical displays of skill, or can a sports anime be a battle of the minds rather than the body? Fastest Finger First takes trivia and turns it into a competitive event, by basing the series on Competitive Quiz bowl. Similar to various popular quiz shows Fastest Finger First uses general knowledge trivia questions as it's basis. However, since this a competitive style of quiz, knowing the answer doesn't necessarily guarantee victory.

Fastest Finger First puts a strong emphasis on the questions, rather than the answers. In the competitive quiz bowl the winner of points is mainly determined by who can answer the question first, rather than simply knowing the answer. The characters in the show can buzz in at any time to answer the question; resulting in extra points for quick correct answers and penalties for incorrect ones. This is similar in vein to University Challenge's “Starter for 10” round. Because of this the series is constantly reminding the viewer how the characters answer each question, rather than showing them coming up with the correct answer. This is done during the “determining point.”

When a question is asked there is a specific moment in the question where the character is able to determine what the correct answer will be. This is shown by the questions either following certain styles or having the speaker put emphasis on different words. From this the characters can determine the complexity and difficulty of the question, and what the expected answer is. Thus Fastest Finger First puts quite a bit of emphasis on showing characters thinking about the answer, during the time in which they're allowed to answer the question. This takes the show from one that is just simple question and answer trivia into quite the strategic mind game.

From this description you may think this series would be like quiz shows you see on TV, where you get the question and see if you know the answer. Sadly, due to the format of the show and buzzing in mechanic this is not the case. Most of the time the entire question isn't fully read out, making divining the answer incredibly difficult. While not impossible, depending on the question, you won't be able to answer every question on offer or be able to determine if the contestant’s answers could be valid. If you're wanting to watch the show to get the ‘quiz show’ experience then you're going to be left disappointed. Whilst this aspect is a bit of a let down the main enjoyment from the show is in seeing how the characters come up with the answers, and the strategies they employ during the games.

The story is pretty standard for the genre: New student - who just started high school - Shiki Koshiyama takes an interest in the school's quiz bowl circle, along with a few other students. His interest in the quiz bowl isn't a dramatic one - where there are high stakes involved - he simply wants to know more about quiz bowls, and works hard at them. With this in mind it makes things less tense, since nothing particularly consequential is at stake if the characters in win or lose. The competitions that take place within this series are all school run, with no prizes for the winner and no repercussions for those that don't excel. There is a promise that all these quiz bowls are practice for the real completion that will happen later, making this whole series seem like a tutorial, or a warm up act.

Given this nature there aren't any really tense moments, save for a few near the end. When one character takes advantage of the rules to mess with the other players. This would be a great source of drama if not for the fact that the characters have had hardly any time to develop. Thus Fastest Finger First has the same problem many sports anime suffer from: It introduces far too many characters into the show early on. There are at least five different schools playing against each other, with a minimum of five people from each school. The most development we get from any of the cast is Koshiyama, the main character, and Mari Fukami, the lead female character. Given that they only had twelve episodes to work with the show mainly chose to focus on the quiz side of things, rather than the characters. Given that this is the main selling point of the show I couldn't call them wrong in that approach.

Overall Fastest Finger First is a mixed bag. The quiz aspect of it is rather fun, showing a unique take on the quiz show format. Given more time the show could have done a lot to flesh out the characters, and given more weight to the whole quiz situation. Instead it spends it’s time ensuring the viewer understands the format of the quiz and the questions. Meaning any depth simply isn’t possible, though it does make for an easily digestible show. The quiz nature makes it somewhat fun while it lasts, but the enjoyment is over in the time it takes for someone to buzz in with the correct answer.