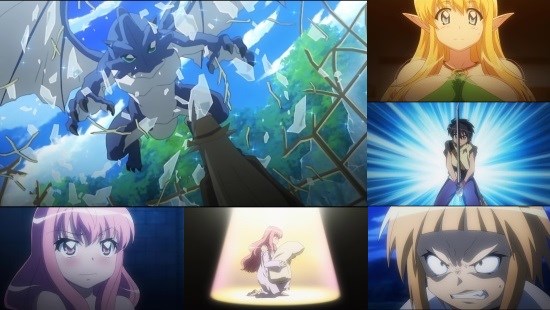 Following straight on from where the second series ended, The Familiar of Zero: Rondo of Princesses picks up from the aftermath of the war that took up most of the screen time of the previous series and slows things to a screeching halt with regards to its plot. While there were major developments in the previous season, the need for a cooldown to reflect on what has transpired may be a necessary one. Unfortunately this "short" break takes up half of this season, with only the smallest glimpses of plot. While the series in the past has juggled harem hijinks and serious plot, those prior seasons felt like they got the balance right - this was especially true in the second season, Knight of the Twin Moons, where the plot was given a lot more focus with the harem comedy aspect taking a supplementary role in order to liven things up slightly. Here, it feels like the series has brushed aside it's plot entirely for a large chunk of its running time in order to provide more clichéd episodic harem moments than overarching plot.

This is mostly evident by the setting of the series, which mainly takes place in the magic academy during a time of peace. Without the threat of war or inherent danger, the characters have more time to relax and reflect upon their personal relationships to one another rather than concentrate on plot specific details. As things stand right now, Louise and Saito have grown closer together, but the same can be said for various other girls in the cast as well. While the harem aspect was used for plot convenient moments earlier, here it feels like more girls and moments are being thrown in to compensate for the lack of plot. In this regard the fan service has also been increased in this series, in turn making it even harder to take things seriously.

This is exhibited in multiple ways, the first being the inclusion of certain episodes, mainly revolving around the girls wearing swimsuits and the male characters spying on them bathing, which provide everything you'd expect from such episodes. The fan service angle is also reinforced further by the introduction of certain characters that fill in the fan service tropes the series perhaps felt it was lacking to this point. The main problem with these characters is that they are actually plot relevant, but the series spends more time on the fan service angle than delving into more important details.

Thus, the third season of The Familiar of Zero falls into a similar trap that many sequels have. This is, of course, using up most of the time to show the characters playing around and then suddenly remembering that there is a plot within the last set of episodes. The plot in question has actually had quite a bit of build up, tying into a sub-plot from a previous season of the show which really works well thanks to it also meshing with other character developments. The main problem however, like many other shows that traverse this route, is that things end just as it feels like they are picking up the pace. This would be far more frustrating if not for the prior knowledge that the show has a fourth and final season (which is yet to be confirmed for a UK release at the time of writing).

This makes The Familiar of Zero: Rondo of Princesses feel more like a break from things and a set-up for the final season, although whether the series can build on what was established in the series' previous instalments remains to be seen. While it doesn't really advance the plot much and feels like they wasted an opportunity to continue the momentum that the previous series built up, there is a certain charm to having things be far more comedic and character-focused rather than having another more serious story. This is likely in part due to this being the third season of the show, and being familiar with the characters that makes the comedic focus work better than it perhaps should.

It cannot be denied that the lack of plot in this series is a huge detractor and our main source of disappointment; however, each character in the show gets a bit more focus than previously to compensate. With the series having some fun episodea that focus more on these character interactions and comedy, it manages to do enough to provide a fun - if somewhat shallow - watch compared to its previous season.

6
This third series trips over itself and ruins the momentum from the previous season, but picks itself up and recovers enough to provide a rather decent effort.