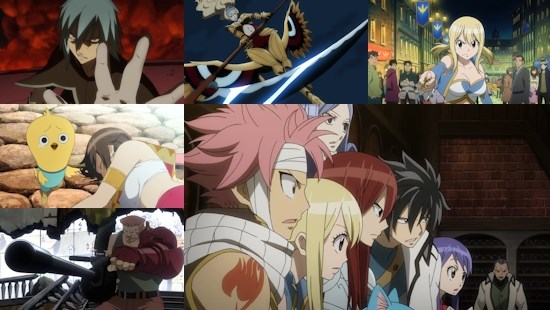 At this point in time, the shounen anime movie formula is a tried and tested one which we all know so well that it barely needs to be mentioned, but nonetheless allow me to outline it for you - film introduces original character, has them bump into the show's existing cast, and some kind of adventure ensues that can be neatly wrapped up in such a way that we'll never see it or that original character ever mentioned again within the series. Unsurprisingly, Fairy Tail the Movie: Phoenix Priestess does nothing to deviate from this formula, as A-1 Pictures' effort (which recently returned for a second TV anime run) focuses upon a standalone story which just so happens to lean heavily on the assistance of Natsu, Lucy and company as a pivotal part of its action and drama.

The priestess of the film's title is a girl named Eclair, and we're first introduced to her in harrowing circumstances when she escapes as the sole survivor of an attack which sees the rest of her village slaughtered. With no choice but to go on the run, Eclair and her cute critter of a companion Momom embark upon a journey fraught with danger and hunger which ultimately sees them run into Lucy in the aftermath of a mission that has proven to be a spectacular failure for the Fairy Tail guild.

This isn't a meeting of like-minded individuals however - although most of her memories seem to have been lost, one thing that Eclair does know is that she has nothing but loathing for magic and those who practice it. The other thing that Eclair remembers is that her sole mission, and the reason for her journey, is to deliver the so-called "Phoenix Stone" in her possession to a wizard named Kalard who resides within the Boundary Forest.

Given the dangers inherent to that area, some of the Fairy Tail crew offer to accompany Eclair on this journey, an offer to which she reluctantly agrees - a good job too, as it becomes clear that Eclair's simple cargo is in fact one half of an item which could be used to destroy the entire world were it to fall into the wrong hands, setting the scene for a threat that requires intervention as quickly as possible.

As you would hope of a theatrical outing of this nature, Phoenix Priestess manages to hit all of the major notes that make Fairy Tail's TV series so enjoyable - it has a good eye for comedy (particularly early on in the film), knows how to dig deep into some human drama which revolves mostly around Eclair and Lucy and their shared experiences, and uses its theatrical budget to deliver some action set pieces that are just a little grander in scope than their television counterparts.

The only real fly in this ointment is the more restrictive nature of exploring an original character in a one-off film - we never spend enough time with Eclair to really get a full grasp on her personality or situation, which leaves some of the emotional payload surrounding her story falling a little flat. Thankfully the sharing of this particular aspect of the film's drama with Lucy largely saves it from turning into a major issue, as assuming you've been watching the home video releases of the TV series you'll be able to dial into her emotional pain with ease.

Alongside this, the visual treatment of big-name shounen properties for the big screen has always varied from the terrific to the terrible, but Phoenix Priestess sits firmly in the middle of this range - as a whole it doesn't really feel any better animated that a typical episode of the Fairy Tail TV series which is a little disappointing, although the action set pieces which bookend the film do at least offer something more substantial than you might see in that more restrictive environment. The film looks okay but not great for the most part though, which makes it feel a little underwhelming in those terms.

As per the TV series, both the English and Japanese language tracks are excellently realised - add good subtitles to the mix and we'd be hard-pressed to pick a preferable viewing option in those terms. Our DVD review copy looked and sounded as good as you might hope, even if our previous comments on the film's visuals perhaps suggests that the DVD version would be good enough for most. Also included with the film is a brief prologue short, following the first day of Eclair's journey and the origins of her companion Momom - a trifle in the grand scheme of things but a nice little addition nonetheless.

In a way, our inability to become overly enthused about Phoenix Priestess is both a blessing and a curse. On one level, it speaks to how consistently strong the TV series is that this film can't really do anything to best it, and confirms that if all you're looking for is more of the same then this movie will deliver. Then again, we can't help but be greedy and want a little more from a theatrical outing of a series like this - yes, it does up the ante in its action scenes a little, but for the most part Phoenix Priestess looks and feels like an extended TV episode with an original character tossed into the mix. This is no bad thing on the surface, and Fairy Tail fans will feel right at home - just don't expect any major revelations from the film.

7
It follows the Fairy Tail formula closely and largely successfully, to provide a film that is enjoyable without being mind-blowing.
LATEST REVIEWS