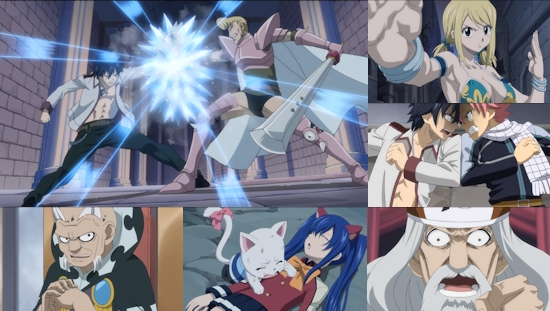 The concept of a parallel universe has been a much-loved plot device for fiction across many years (and no doubt many parallel universes) at this point, and it's not difficult to see why - there's a lot of room for fascinating story-telling and entertaining mischief making inherent to tossing a group of characters into a slightly different version of their world where they're likely to bump into an alternate variation upon themselves.

Long-standing viewers of Fairy Tail will not have been surprised to see the closing elements of the previous volume of the series employ its alternate world largely for mischief in the early running of its newest story arc, but it also found time to reveal some worrying truths from this world - truths which seem all set to paint the show's flying feline critters of Happy and Charle as the villains of the piece, much to the shock of their Fairy Tail associates who have also stumbled into this topsy-turvy reality.

In fact, their position is simply a symptom of the wider state of Edolas; a world where the feline Exceed are revered as godly creatures that surpass the mere humans beneath them. This is not a status quo that everyone is happy with, as it simply serves as a reminder of how powerless the humans of this world are without the surfeit of magic available in the land from which our heroes hail. It's their magical ability which has seen them brought to this place in actuality, as the kind of Edolas, Faust, seeks to siphon the magical power of Earth Land and its people for his own ends.

Thus, the scene is set for more of the typical Fairy Tail fare that we know and love, as good fights evil - or rather, good fights not evil but not entirely morally sound - to save the trapped people of Earth Land from their fate whilst also looking towards the Exceed and their powers for help. Thankfully, the tried and true formula still succeeds in entertaining thanks to an enjoyable cast of characters (bolstered at times in this instance by their very different Edolas' compatriots) and an innate ability to switch from comedy to emotional drama without ever having to force the issue. If you've enjoyed the series thus far then, there's more than enough to keep you happy on this occasion.

However, and perhaps for the first time in this series, a few cracks do begin to appear in the latter stages of this volume. For starters, the overall story does outstay its welcome quite considerably, continuing to roll onwards when it should probably have been wrapped up and brought to its natural conclusion more quickly. Even worse, the volume ends with a huge cop-out regarding a particular character that admittedly works well on an emotional level in its own right, but at the same time undermines a swathe of the show's previous episodes in a deeply unsatisfying way - cue jokes about how characters never really die in shounen series.

Still, provided you aren't too frustrated by these wobbles in what has up to now been an impressively consistent series, the rest of the show's package remains intact - the Blu-Ray edition of this volume is crisp, clean and colourful even if the content itself is hardly the pinnacle of animation, and if anything the show's English dub is proving to be increasingly comfortable when it comes to matching (and at times even besting) the original Japanese voice work. Regardless of your preference in terms of language, the volume also boasts solid subtitles to help things along as per previous volumes.

Although this is perhaps the weakest volume of Fairy Tail so far on account of its aforementioned flaws which do sour us towards it by the end of its current story arc, that isn't to say that it's a poor addition to an enjoyable series as there's still a whole lot to like and no shortage of strong moments prior to things running out of steam. Hopefully wherever the series chooses to head next can allow it to clean up some of the issues which crept into its narrative here and return us to the pinnacle of its powers.

English 5.1 and Japanese stereo audio with English subtitles. Extras consist of US cast commentaries for episodes 89 and 96, textless opening and ending songs, and trailers.

6
Another strong bout of story-telling fades away thanks to some late missteps, but there's still plenty of the enjoyable Fairy Tail formula to be found here.
COMMENT AND DISCUSS
blog comments powered by Disqus