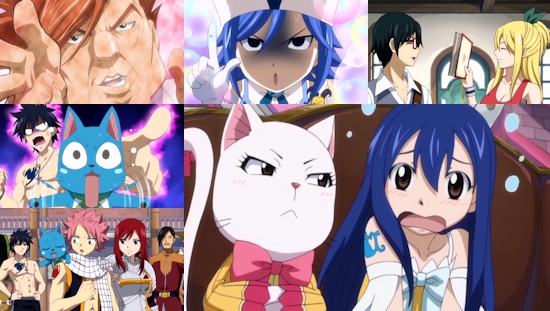 It's actually been a surprisingly long time since we last had an opportunity to watch any Fairy Tail for review, but if you've been waiting with bated breath for the return of this much-loved shounen newcomer then that wait is over thanks to the release of part five of the series - and on Blu-Ray no less!

Having finished its major story arc at the end of part four with the expulsion of Laxus from the Fairy Tail guild, this fifth volume of the series picks things up just one week later with everything having seemingly returned to normal... or at least as normal as this show and its colourful cast can manage.

While Lucy frets over the promise of a "fateful encounter" and has to deal with a change in her father's fortune, and with a brief bout of insanity ensuing within the guild thanks to a supposed love potion that goes horribly wrong, more serious machinations are occurring in the background - namely the rise of a number of "Dark Guilds" who are posing an increasing threat to the peace.

At the centre of this threat is one guild in particular - a group known as Oración Seis. Thus, Fairy Tail find themselves tasked with providing a team that, alongside a number of other light guilds, will set out to destroy Oración Seis. Natsu, Lucy, Erza and Gray are selected as Fairy Tail's representatives, pitching them alongside plenty of other colourful characters as well as a quiet yet seemingly powerful Dragon Slayer known as Wendy Marvell, in what is almost certainly the group's most dangerous quest so far. As the true goals of Oración Seis become clear, this danger only becomes more ominous, with Jellal once again taking a major role as part of a plot to wipe out the entire world's Light Guilds in one fell swoop...

Having spent so much time away from Fairy Tail, I was worried that it might have lost some of the charm that ran through the early volumes of the series in the intervening period. This proved to be far from the case however - the early episodes provided here are a lot of fun, packed with comedy to match the frivolous nature of their largely isolated stories. Thankfully, this sense of entertaining the audience above all else pervades the entirety of the twelve episodes here - its characters and the interactions between them remain as strong as ever, and even when the going gets tough the laughs keep coming, but the series still knows how to provide some impressively powerful drama when the plot requires it.

If there was one major criticism to be made here, it's that occasionally the series is a little tone-deaf at blending that comedy and drama into a single package, allowing the former to bleed too heavily into the latter and thus diluting it. Thankfully this happens rarely, but it does tend to stand out in the instances where it does. The series also allows it's pacing to go off the rails here and there, launching into reminders of previous events or explanations of certain plot points that break the flow of the narrative while also feeling like a lazy way of building up some aspects of an otherwise well-realised world.

Thankfully, neither of these negative points grow beyond mere scratches on the surface of a series that continues to be - in our book at least - a great example of a shounen anime series done right. It has action in spades when it gets into the swing of its main story arc, it has comedy that's genuinely funny, and its snappy pacing avoids the descent into boredom that can be triggered by other less accomplished series with similar goals.

Unfortunately, we only received this volume of Fairy Tail for review on DVD, so we can't comment on whether there's a substantial visual upgrade to be had from moving to Blu-Ray for this series - given that the show isn't animated in a full High Definition resolution however, we imagine it won't be the most striking difference you've ever seen. Certainly, this DVD release looks pretty clean and colourful, and the show as a whole is well animated enough, backed up by strong voice cast performance on both the Japanese and English sides of the coin. Add in some fun US cast commentary tracks and you have yourself a decent release.

If we were worried that time would have faded our feelings for Fairy Tail, this fifth volume of the series certainly blew away such concerns like a breath of fresh air. If you aren't a fan of the typical shounen anime trappings then this still may not be the series for you, but if you're at least willing to give a long-running show that promises to balance action, drama and comedy in the name of entertainment a try you might be pleasantly surprised at what Fairy Tail brings to the table. For existing fans of the series, the equation is even easier - everything you enjoyed in prior releases is here in spades once again, and with a Blu-Ray release added into the reckoning there's really no reason not to keep up with the show now.

English 5.1 and Japanese stereo audio with English subtitles. Extras consist of US cast commentaries for episodes 49 and 58, trailers, and textless opening and ending themes.

7
This volume of Fairy Tail offers more of the same, and that's certainly no bad thing in the case of this particular series.
COMMENT AND DISCUSS
blog comments powered by Disqus