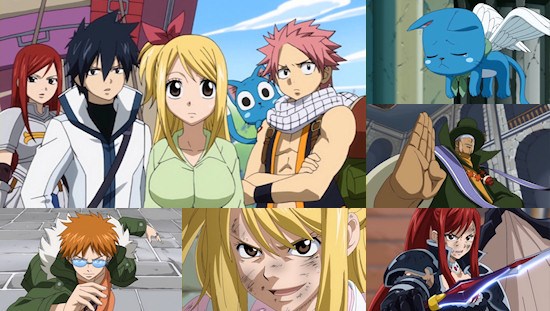 Are you ready for another Fairy Tail review?  Make sure you're sat away from your monitor in a well-lit room!  Sorry, after hearing Natsu imploring me to do exactly this so many times now, these important viewing tips have been burned irrevocably into my memory...

Anyway, onto this third volume of Fairy Tail on DVD; an eagerly awaited volume it is too, with the second instalment of the series having left us hanging in the midst of a life-threatening conflict between the Fairy Tail guild and their bitter rivals from Phantom Lord.  With their master Makarov out of action, Lucy kidnapped, a giant robot castle rampaging around the place and Phantom's ace wizard quartet of Element 4 on the rampage, things aren't looking good for our heroes to put it mildly, so it's no surprise that a fair amount of time within this volume is spent watching how this scenario pans out.

All of this is pulled off in Fairy Tail's usual style - plenty of magic-infused battling in true shounen style, suffused with a not inconsiderable amount of humour to keep things churning along.  It's actually the comedy angle of this particular story arc that stands out well in its own right - in particular, Gray's skirmish with one of Element 4's members is hilarious as he battles on completely oblivious to the fact that his opponent, Juvia, has fallen in love with him at first sight, leaving him completely baffled as she is in turn reduced to jelly and then massively enraged by his actions.

Thankfully the action portion of this arc also works reasonably well alongside such entertaining distractions - although it won't win any points for originality, fight sequences never outstay their welcome and move along at a decent pace, which is actually quite refreshing when set against other comparable series that have a tendency to drag everything out at glacial speed.

Once the not-so-minor issue of dealing with Phantom Lord is done and dusted there's little time for pause, as the remainder of this volume leaps into engaging us with the back stories of a couple of its characters, and more importantly the present-day effects of their past as it catches up on them rapidly.  The first subject of this focus is Loke, as his recent behaviour is explained in short order, before we move on to another major story arc as Erza is faced with confronting an unwelcome incident in her past - an incident which seems to threaten not just herself but the wider world at the highest levels.

As per our previous comments, even these subsequent story arcs are decently plotted and well-paced, moving on at just the right speed to make the most of what is being presented, sprinkling it with comedy and then moving on just before boredom or repetition threatens to sink in - if only other series could learn a little from this adaptation.

This isn't to say that everything within Fairy Tail is top-notch - it does have a tendency to lay the sentimentality on a bit thick at times, and boy is the show's musical soundtrack incredibly limited and repetitive (aside from the good use of the occasional classic piece here and there) to the point where it almost threatens to undo some of the good work achieved by its writing.  Even the show's animation quality isn't exactly anything to write home about - it's remained consistent and colourful throughout the series thus far, but it's pretty standard fare, although in fairness this is only to be expected from this kind of long-term series.

Such quibbles aside, Fairy Tail continues to prove itself as an accomplished example of its genre - thus far, it has managed to avoid falling into most of the pitfalls exhibited by some of its shounen counterparts, and it continues to offer action and comedy in spades which revolves around a lovable cast of characters.  If you found yourself taken in by the earlier volumes of this series, this third DVD instalment of Fairy Tail certainly won't disappoint.

English 5.1 and Japanese 2.0 audio with English subtitles.  Extras on these two DVDs consist of text-free opening and ending credit sequences, and English commentaries on episodes 26 and 32 featuring the show's English ADR director, producer and writer, as well as the series' mix engineer.

7
Another well-paced and broadly enjoyable set of episodes that will be sure to please those keeping up with the series.
LATEST REVIEWS