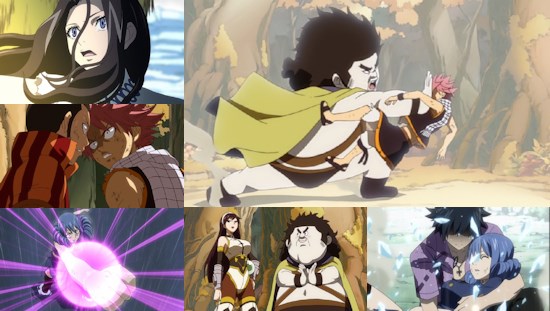 Remember Fairy Tail? I wouldn't blame you too much if the answer is "no", given that the show's UK home video release was perhaps the biggest casualty of Funimation Entertainment's transition within the market as they moved their business from Manga Entertainment to Anime Limited. This long hiatus without any Fairy Tail release is just the latest in a series of setbacks for a franchise that has seen format shifts this way and that to give the show a confusing UK release strategy that must surely have done it some enduring damage at this point.

Thankfully though, it seems that this period of pain has come to an end, and although the return of Fairy Tail is a strictly DVD-only one we are at least back on the rails with this decidedly late release of volume ten of the series, with plenty more to follow at (theoretically) a decent clip over the coming year or so.

To make things worse still, part nine of Fairy Tail left us hanging slap-bang in the middle of a story arc, leaving the story of this latest volume to server as a tricky memory test as you try to pick up where things left off back in February 2015 without any real recap to speak of - how typical that the one time you want a comprehensive reminder of events from a shounen anime series it fails to provide one!

Thankfully after a spell of feeling your way back into the series, you should be back up to speed in the midst of another compelling story arc, with Grimoire Heart deep into their mission to obtain Lord Zeref while also wiping out the Fairy Tail guild in its entirety on the sacred soil that is Tenrou Island, with Gray Fullbuster seemingly a particular focus of their malicious intent. This sets the scene for plenty of classic Fairy Tail action, as Grimoire Heart's powerful Seven Kin take on the guild's finest in a number of pitched battles. As if this wasn't challenging enough, the whole affair increasingly turns into a race against time as the Magic Council seek to put a stop to proceedings by blowing the entire island to smithereens, while Fairy Tail themselves find their powers being sapped which itself threatens to curtail their desperate struggle to win out.

If you've been keeping up with the series to date, then everything that has kept you hooked to Fairy Tail is still present and correct here - as we mentioned, it puts together some compelling battles that hit all of the right spots, while there's plenty of comedy on show to bring levity to proceedings when required. If anything, the series occasionally overdoes its doses of comedy in this volume to the point where it can feel a little grating, but for the most part it knows when to go for drama and emotional impact and when to set all that aside for a bit of a giggle. It's no surprise that friendship and camaraderie prove to be the order of the day as this story arc progresses, so you could also raise some legitimate concerns about the series becoming formulaic, but when the formula still manages to toy with your emotions and make you smile in equal measure it's hard to knock it on that count even now we're over 100 episodes in.

As much as we lament the lack of a Blu-ray release here (especially at a time when the series finally made the transition to native HD animation!), this DVD release is a solid one and far better than Manga Entertainment's abysmally poor effort for part nine of the series. As an NTSC disc this volume neatly sidesteps any PAL conversion issues, giving us solid video quality and pretty good subtitles throughout. The show's English dub continues to be decidedly entertaining in its own right, although at times it deviates a little too far from the original script - when you start flipping what a character says from something negative into something positive ("I can't move" becomes "Let's do this!", to paraphrase an example) you begin to lose important information that there's no excuse not to convey, although thankfully such occurrences are rare.

For all of the misfortune that Fairy Tail has suffered here in the UK, it's great to see it return as a reminder of how it takes its formula of drama, action and comedy and gets the balance of those elements just right. It's certainly not particularly original at this point - every story follows the same basic trajectory with a different spin to it - but it continues to deliver more than enough entertainment to justify its dogged adherence to that formula. If you've enjoyed the show to date and have somehow managed to remain patient over the past 18 months as its UK future was left in limbo, then this tenth volume is a rich reward for your perseverance.

English 5.1 and Japanese stereo audio. Extras consist of US cast audio commentary tracks for episodes 109 and 119, "Marketing a Faity Tail" feature, a US trailer and text-free opening and closing credits.

7
Fairy Tail is back after a long enforced absence, and returns with the same formula which makes it so entertaining and successful in what it does.
LATEST REVIEWS