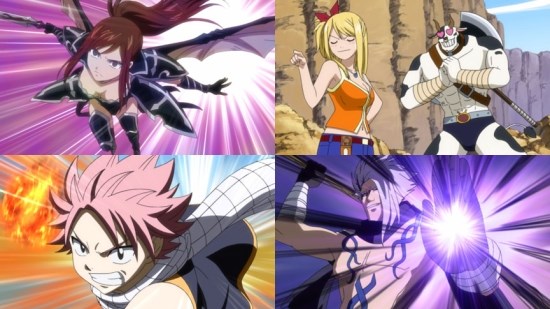 We’re not exactly short of long-running battle anime at the moment. Bleach and Naruto are still doing very well for Manga Entertainment, but that doesn’t seem to be enough and we now have our third entry, Fairy Tail. From Hiro Mashima, the guy responsible for Rave Master with the weird-arse dog/snowman thing, this anime adaptation is here to convince us we need another seemingly endless show to watch. But does it persuade us?

Lucy Heartfilia is a teenage celestial wizard, who can summon celestial spirits to aid her via celestial keys. Her dream is to join the world famous "Fairy Tail" guild of wizards. Lucy encounters Natsu Dragneel, a dragon slayer wizard with the power to use fire. Natsu is looking for the dragoon Igneel, while Lucy ends up tagging along to become part of the guild and the pair end up taking jobs to make money.

That is very much the basic premise of the series, and from then on we meet a range of various colourful characters - in fact, during our first thirteen episode romp we actually cover quite a bit of ground within the universe. By the end of the second episode we are acquainted with the Fairy Tail guild itself and we get slowly drip fed new characters to go along with the storylines. The thirteen episodes in this first volume are quite well spaced out to make sure that nothing takes too much time to develop, but without feeling that everything is being rushed through.

Characters that the viewer has regular contact with are very well established quite quickly. Lucy is very much the representation of the viewer, new to everything Fairy Tail has to offer, but thankfully she's able to stand up for herself and actually make a decent contribution to the story. Natsu is also not your standard main protagonist either. He doesn’t smoulder with inner turmoil like Ichigo or seem determined to prove himself like Naruto; he's simply looking for his dragon and doing jobs on the side, getting involved with other guild members when he needs to. It is actually refreshing to have a main character that doesn’t have to tick every box on the anime cliché checklist.

Another plus point that Fairy Tail has is that it never takes itself too seriously. Bleach and Naruto can be horribly bogged down with melodrama at times, and while Fairy Tail has hints of becoming a little more dramatic it cuts in some comedy and slapstick to make sure it never borders on the overly broody drama we’ve all become accustomed to in other recent shounen series.

Fairy Tail is hardly going to blow your mind with its concepts, provoke thoughts about the state of the world or make you think outside of the box. The series is primarily about the fights and the laughs, and to be fair in provides plenty of those in equal measure. Most of the checklist for a battle anime has been ticked off here; there is nothing overly surprising and to be honest it won’t shock or amaze to any great degree. Animation and music are the usual standards we would expect from a long running show, with the required J-pop tune popular at the time sandwiched in at the beginning and end. Scenes won’t be bringing you to tears from their sheer beauty, but they are functional never the less.

Fairy Tail’s first thirteen episodes are entertaining and you will enjoy yourself watching them, which is more than can be said about a lot of anime. It is very much a pleasant surprise from this type of anime  that I’m glad I have been able to try.

Should you buy Fairy Tail? If you need something that isn’t exactly thought-provoking which you can just switch off to, and you’re bored of the melodrama of Naruto and Bleach, then you may have found something new here. Just don’t expect it to blow your mind.

English and Japanese audio with English subtitles are supplemented by the usual range of extras. Nothing particularly outstanding here.

8
This opening volume shows plenty of promise and thankfully doesn’t take itself too seriously.
LATEST REVIEWS