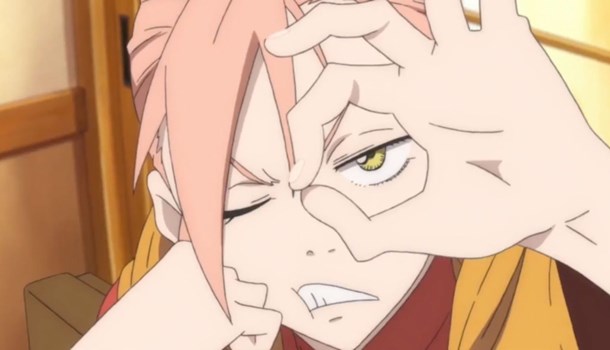 It’s still hard to get over this fact. FLCL has been released in the UK. I’m holding the DVD of the second volume at the moment… and its incredible. It’s enough to bring a tear to your eye. With the magic of the first volume still bouncing around my head like a mad thing, this second volume has much to live up to...

The first episode focuses on our troubled hero Naota’s classmate and childhood friend Eri Ninamori, as she tries to prepare for the school production of Puss in Boots. Her efforts are somewhat hampered by the media circus that has formed outside her home, due to the machinations of her father, the mayor of Mabase. All the while Naota is doing his best to avoid the rehearsals and hide his latest, alien induced growth.

The second episode introduces us to Commander Amarao and his incredible “eyebrows”. (You really have to see them to believe them!) The commander warns Naota about the dangers of hanging around with the Vespa riding Haruko (the girl who whacked him around the noggin in episode 1 and who has subsequently moved in with Naota as his maid). Meanwhile an out of control satellite hurtles towards Mabase, and guess who's responsible?

Everything that volume 1 did so well is replicated here in volume 2 - the mad animation, the music, the characters, the plot, the action, everything is in place and accounted for. The high bar set by the first volume has been reached again with this volume and it’s clear to see that there has been a huge amount of time and energy put into this series.

If there is anything negative to say about this disc, it's that it feels very much like mid-series volume. While we do get to explore the character of Ninamori and get introduced to some new elements, there isn't much here that will shock and awe viewers. The climatic scene of episode 4 gives hints at what's to come, but don’t expect anything earth shattering.

The soundtrack is again top-notch and really does make you want to seek out the FLCL soundtracks. Once again The Pillows manage to capture the scenes with their music perfectly and just add that little bit extra to make this series extra special.

It’s fair to say that if you liked volume 1, then it’s a no brainer that you should be buying volume 2. The incredibly high standards are still maintained and while the story doesn’t bring many revelations in this volume, it’s still highly entertaining providing the perfect mix of comedy and drama that we’ve come to expect from FLCL.

While not as interesting as the last volume extras, there still is plenty there:
Poster Art Gallery
Australian trailer (a left over from the Madman transfer)
Japanese closing
Trailers of MVM series’
Cast profiles

9
The perfection continues there is little reason not to own this.
LATEST REVIEWS