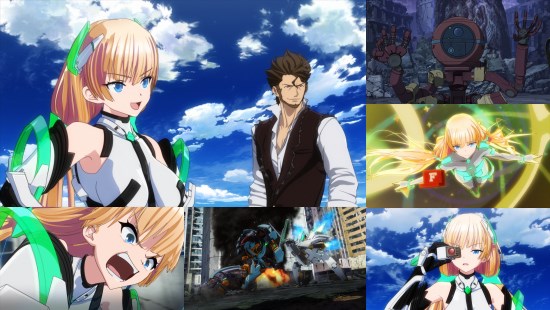 In the far-flung future, humanity has progressed to no longer have need of a physical form - or, indeed, for a physical home. Although the Earth isn't entirely inhospitable it's no longer the green and luscious world that we might recognise at home, and as a result the majority of the populace have decamped to space, in the process digitising their personalities to reside in a virtual paradise known as Deva where the only consideration that separates one person from the next is the amount of memory and processing power afforded them. For those deemed useful enough to be granted copious amounts of resources, there's no limit to the experiences a virtual body can take in and enjoy - why would anyone want to live with inconveniences of a physical form with considerations suck as nutrition or sickness to worry about in this wonderful, technological future?

This question certainly hangs heavily over top-class security agent Angela Balzac, as she finds herself heading an investigation into Frontier Settler, an individual who has been regularly hacking into Deva's communication channels to interface directly with its populace, attempting to coax them into joining a foray deep into space via a spacecraft he claims to have built from his home on Earth. As preposterous as this plan sounds to Deva's finest, Frontier Settler's ability to hack their systems with ease and stir up trouble is nonetheless most worrying, and so Balzac is sent to Earth as one of a number of agents to find and terminate this hacker's terrorist activities.

As a model security agent, Angela is keen to get her teeth into this case - so much so that she forgoes the full growth of her physical body for the mission, providing a convenient excuse for the fact that she looks like a teenage girl - but decidedly less enamoured with the inconveniences of a physical form. Baffled by the behaviour of her Earth-born partner for this mission, Zarik, and the lust for life he holds in his physical form despite the barren nature of his home, Angela eventually manages to track down Frontier Setter - and any expectations she might have are confounded by the unusual nature of this so-called "threat".

With a screenplay from Gen Urobuchi, you might expect Expelled from Paradise to dig deep into some of its philosophical constructs on the nature of humanity, and how escaping your physical form doesn't necessarily mean escaping the control of those who govern over you. However, surprisingly there's a lightness of touch to most of this subject matter - its thoughts on the importance of a physical body to the human experience remains up front and centre throughout, but it mostly keeps its place within the narrative as a part of organic conversation between Angela and Zarik or from her experiences in a physical form.

This isn't necessarily a criticism of the film however, as the result is a tight and well-scripted movie that belies its running time by flying along at a brisk pace that still gives its plot elements room to breathe. If you're looking for action, then most of this is saved for the final half hour of the film (although it's well worth the wait as it offers up some breath-taking moments), but Angela's experiences in her physical body and her rapport with Zarik offer plenty to keep the story zipping along before the time does come to do some soul-searching once Frontier Setter has been revealed. There's plenty left unsaid about the film's world and premise - you could probably make an entire series out of Deva's class system alone - and that might prove frustrating if you want to explore its setting more thoroughly, but what is here is engaging and entertaining in equal measure as a well-crafted story.

From a visual standpoint, by far the most notable aspect of Expelled from Paradise is its place as another all-CG effort from Toei Animation - unlike the more photo-realistic Harlock: Space Pirate, this film always aims squarely at recreated a more traditional anime style within its 3D framework, and it succeeds to a remarkable degree. Angela in particular is a lovingly realised character in terms of movement, body (and boy does the camera love to linger on parts of that body) and expression as a great example of how to pull off this mix of 3D and cel shading, and although the rest of the cast don't get the same treatment - as exhibited by Zarik's bland-looking character in particular - the overall look of the show is very good indeed. It's when the film's action kicks off that the CG animation really enters its own of course, and that final act of the film knocks it out of the park in this regard as a high-tempo, busy action set piece that has just the right amount of tension to power it along. There are other flashes of action sprinkled throughout, all of which work similarly well from a visual standpoint. In short, this is one of the better examples of how to produce an anime-styled work with CG animation, and its theatrical budget and treatment put the likes of Knights of Sidonia to shame for the most part, bolstered further by all manner of pleasing character and setting designs.

Angela's character is also sold tremendously by the work of Rue Kugimiya - an instantly recognisable voice in her own right, but also a perfect fit for the characters she pouts, grimaces and bad-temperedly stomps around the film's early running before softening as she gets to grips with her situation in a most satisfying way. The growth of this character is supposed to map the progress of the film, and Kugimiya's performance captures this perfectly as the clear highlight of a voice cast that is otherwise solid.

The upshot of all this is that Expelled from Paradise is a very enjoyable film - well written, well-paced, visually appealing and with a good blend of elements that make for what amounts to a sci-fi road movie of sorts. Thanks to its scenario, the film also has just enough ideas to tickle your brain without demanding any soul-searching or deep thought - a prospect which may frustrate some looking for a little more commentary on its imagined future, but works just fine in service to making for an entertaining and accessible movie.

The growth of all the all-CG anime project has brought wailing and gnashing of teeth from some quarters, and in that sense Expelled From Paradise will be an equally acquired taste to those sensitive to the "death" of 2D animation, but from a more considered perspective this is strong evidence of what can be achieved by producers looking to meld the latest technology with typical anime trappings. It might not quite be an animated paradise, but it's a long, long way from being stuck in the slums.

Expelled from Paradise was screened in Edinburgh as part of Scotland Loves Anime 2015.

7
A lot is left unexplored within its scenario, but this only serves to ensure that Expelled from Paradise is a well-paced, good looking and enjoyable viewing experience.
LATEST REVIEWS