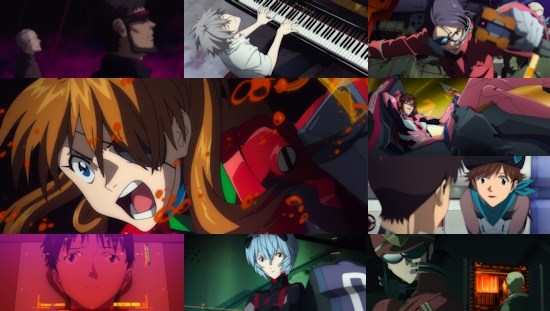 Not so long ago, it looked like a physical release of Evangelion 3.33: You Can (Not) Redo was about as likely as Harmony Gold agreeing to allow the release of a Macross series in the West, but now at long last the release is here and the discs are in hand four years after the original release of the film. So, the question for all you rabid Evangelion fans must be – what the hell happened? Oh, and also is it good? Yeah, that’s probably quite important...

A mysterious object orbits the Earth in the cold silence of space. However, when that silence is broken by the arrival of Asuka and Mari it is revealed to be a chamber continuing the remains of Unit-01 along with its pilot, Shinji Ikari. After the two are returned to Earth, Unit-01 is converted to be the engine of a powerful battle cruiser whilst Shinji is relegated to the sidelines, baffled by the changes that have occurred around him and unable to comprehend how those he felt were friends and family now treat him as some dangerous stranger. Soon the truth comes to him, far worse than he thought – 14 years have passed, NERV is now at war with a splinter faction known as WILLE and Rei is gone. Unfortunately he’ll have little time to deal with this as Gendo still has plans for him involving the enigmatic Kaworu and the powerful new Unit-13.

You Can (Not) Redo is at its core a good film, but it’s unfortunately been saddled by quite a lot of baggage by its audience which has caused it to receive quite a lot of negativity even before its release issues. It’s understandable why this would be the case. For starters this is the first 100% original Evangelion made since End of Evangelion. The other two films were completely done from scratch and had new material its true, but they were at heart a remake of the original series. This has given 3.33 a lot to live up to, especially after End of Evangelion was such a strong film to complete the original series. The fans, one suspects, were expecting a huge action piece that would explain all the mysteries the series has withheld for years, but whilst there is some of that 3.33 is much more interested in being a character piece exploring director Hideki Anno’s favourite topic – mentally abusing Shinji until he cracks.
The thing is that in previous Evangelion works this kind of material has been sandwiched by both the action and by the various issues of the other characters. Here the rest of the cast are mostly around to ferry Shinji from place to place, aside from Kaworu and Gendo who are there to twist the knife. Even at a brisk 97 minutes the film can’t quite sustain the Shinji storyline for this length, especially when it keeps referring to things that happened between this film and 2.22 which it never really expands upon. The other characters are sorely missed, and whilst a host of new characters are introduced we never really get the sense of who they are – even Mari who became a colossal fan-favourite after a very small role in 2.22 is given next to nothing to do here and is relegated to Asuka’s sidekick.

You do have to wonder just how much of the films production issues are responsible for this, given that the film was totally scrapped about a third the way into production and restarted (take another look at the preview at the end of 2.22 for a glimpse at the original version – none of those scenes have made it to the final film).

On the other hand though, the film itself does work. Whilst it might not tell the story that we were looking for it still paints a fascinating view into a new take on the Evangelion universe that consistently throws up new stuff that makes you hungry to keep watching and see more about what’s going on. It turns out that bullying Shinji is still interesting enough that you want to find out just how they’re going to do it this time (a bit like waiting to see how they were going to kill Kenny in South Park) and the action sequences that book-end the film are really great to watch, although at the same time they don’t come close to the Asuka fight from End of Evangelion (surely still one of the greatest mecha action sequences ever) and they do suffer a little from a tendency to wander into the abstract.

On a technical level you have to admit that the film really pulls it off. It looks spectacularly good throughout, even if a lot of the abstract backgrounds seem to be coming from a different film entirely and don’t really work with the rest of the movie. You also have to give credit where credit is due for how awesome ‘pirate’ Asuka looks! Studio Khara have done good work throughout this "rebuild" series and this is no different, although oddly enough the preview for the final film is clearly comprised of unfinished shots and looks really clunky. The soundtrack is really good here too and Hikaru Utada returns once again for theme song duty with Sakura Nagashi, which is solid enough though not quite as strong as the other films theme songs.

The Japanese cast present a really good performance here too, but the English dub is shockingly bad. It’s stilted and dull, and it sounds as if the remaining members of the original cast can’t quite remember how to do these characters any more - one suspects that the dub was rushed to get it ready to try and cut down on the time taken up by the forced re-writes to the translation of the script. Speaking of which, it should be mentioned that the two scripts are different but not to a huge degree. Both subtitle tracks are available on the disc here and both are equally good versions of the film. The main difference is that the new script tends to push characterisation a bit more and extrapolates further on certain points. For the record I don’t at all hold it against Anno and Khara for wanting to make sure they got the version of the film they wanted released in the West, but at the same time one does have to wonder what on Earth Funimation and Khara were doing that made the re-translation take two years (I suspect there were issues on both sides here and it will be interesting to see if Funimation are still going to be involved when the final film turns up).

As for the disc itself it is worth noting what isn't on the disc. Whilst there are what feel like a million trailers for the film you won’t find the making of documentary that was on the Japanese release, and more annoyingly there isn’t any of the footage that was completed for the original film despite the fact that this would have been an incredible addition even if you only got it in storyboard form. There’s also no commentary track from either the Japanese or US cast and crew, so don’t expect to find the truth about what went down. Given how much could have been on this disc it’s really disappointing to find this so bare bones.

Ultimately, I rather suspect that by this stage if you’re engaged enough with the franchise to have the first two films you will be picking up this one too and likely already have a pre-order in.  What you’ll get is a good film, and I can’t stress that enough, but you have to remain conscious that it’s not going to be the film you were expecting and you have to be able to put aside all the baggage that comes with that. Then you can resume the wait for Evangelion 3.0 + 1.0, although quite when we’ll get to see the fourth film is a big question at this point. Don’t hold your breath until Hideki Anno’s Godzilla film has hit cinemas.

English and Japanese audio with two English subtitle tracks. Extras consist of trailers and a video with some animatic to scene comparisons.

6
A decent entry, but not the best in the series.