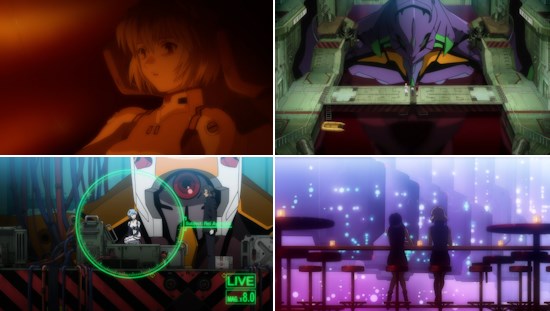 It has been nearly 15 years since the original series was launched in Japan and finally we get the first part of the Rebuild of Evangelion project. For the first film in the planned series of four, Manga is thankfully skipping the unneeded releases of 1:0 and 1:01 and releasing the ultimate edition 1:11. But has the wait been worth it?

Shinji Ikari has been summoned to Tokyo-3 by his father to pilot NERV's newest defense, a bio-weapon known as Evangelion. Unfortunately for the Earth, Shinji doesn’t want to pilot the weapon and already the mysterious beings known as Angels are starting to attack the city. Now with an unstoppable enemy bearing down on them, things are only going to get worse.

So has it all been worth the wait? That isn’t a simple answer. On the one hand the first of the planned series of films covers the opening episodes from the original series. A good 90% of the film is the opening two volumes of the original series condensed into a film format. While the animation has clearly been redrawn and 3D animation has been inserted into various scenes, for the most part the film is basically a carbon copy of what we’ve seen before.

On the plus side, some of the Angels have been reworked, and for the most part look much better for it. The 6th Angel benefits the most from this redesign, as it looks much more menacing than before.

For those that haven’t seen Evangelion's previous iteration(s), it remains a very interesting and varied series, looking at the human condition in a way that has yet to be outclassed even after all these years. While there are battles and fantastic looking scenes, Evangelion's prime asset is still it's characters, and even now they remain incredibly complex, rich with character-traits that any budding  psychiatrist could only dream of.

It’s a testament that even after all these years the story is still as watchable and mind-blowingly complex as ever, demanding your attention lest you miss something important. What Lost does now, Eva did nine years before it.

While we have been promised new characters, new scenes and a complete re-imagining of the series, this first instalment doesn't veer far from the path already trodden. Newcomers won’t have much of an issue, but older fans will not be so forgiving. Granted some scenes are new, while some scenes that appeared later in the series come earlier, but it does feel like we've have been here before on many occasions.

As I mentioned, we are fortunate enough to be getting the 1:11 edition of the film series, which comes with version 1:01. The difference between the two are some additional scenes, which to be honest will more than likely go unnoticed by most bar the most observant Evangelion fan. It certainly won't effect your viewing, whichever edition of the film you watch.

So the big question is whether you should pick up this film? If you have never seen the series, then this first film is an experience in itself and it should be just that; experienced. The complex characters, the constant feel of dread, the awesome fight scenes... Evangelion is everything we remember and so much more.

Those that have seen the series will want to invest in the HD Blu-Ray format, which is how EVA was meant to be seen. The 3D scenes and new animation add that bit more to the film; it is just a shame that there isn’t more unique content within the film itself. Hopefully the release of Evangelion 2.0 will bring about the changes the fans are hoping for.

Extras include the 1.01 theatrical cut of the film on a second DVD. As well as that you get the Angel of Doom promo music video, news flashes and movie previews for Beautiful World version 2, 2A and 2B.

8
Not the re-imagining that we’ve been expecting, but this is still something every anime fan old and new should experience.
LATEST REVIEWS