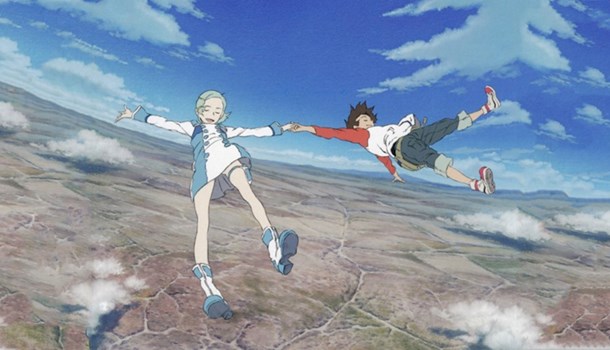 Beez's latest offering follows two Gundam SEED traditions - its a 50 episode series, meaning 10 discs at £19.99 and a huge investment for the fan. Secondly, it's about a boy who seems to have latent piloting powers getting caught up in events beyond his control. Still, it worked for SEED, one of my favourite anime series to date, so it could work here...

Eureka Seven stars 14 year old Renton, son of a great hero, thirsting for adventure away from his small town, and aching to become a Trapar Lifter, which involves surfing on invisible Trapar particles which are rich in the atmosphere, and if caught correctly allow the surfer to fly through the air, green sparks flying from beneath the board. It's a device that allows for some incredible action sequences, and in the opening minutes of episode 1, we're watching an aerial battle at sunset, which is absolutely stunning.

Renton's hero is the enigmatic Lifter named Holland, whose activities against the military have seen him branded a criminal. He heads a ship called the Gekko-Go, manned by a bunch of misfit surfer types, only a handful of whom we get to meet on this first disc. When one of them, a young girl named Eureka, crashes her mech into Renton's house, he's well on his way to the adventure he's been pining for...

Renton himself is less composed than stoic young Kira Yamato, with an immature streak a mile wild, and a thirst for adventure. At first I found him hugely irritating, but totally in character for a young teenager with a severe case of wanderlust. As the series progresses, he becomes a tad more likable, but its really Holand and his crew that make up most of the entertainment., especially the beautiful lush Talho, who reminds me of a certain EVA captain - often drunk and a huge tease to our central character.

The anime oozes a slacker style, and boasts an amazing assortment of beachware, with characters wearing a variety of baggies and beach shorts, and visually the anime is on par with anything I've seen to date. The most obvious influence, style-wise, is FLCL by Gainax, but the plot so far could come from pretty much any mech-anime you care to mention.

The English dub is passable - there's nothing out of place and the lip-synch is spot on, so if you're not the kind of otaku who bothers with subtitles, you'll be well serviced here.

In fact, the only flaw with Eureka Seven is the initial lack of direction. Where SEED took off at a rate of knots and never stopped, Eureka 7 takes things a little more sedately, and because of this the direction of the series, and indeed many character motivations, haven't taken hold yet. Given time, the plot could develop nicely - there are already some mysteries surrounding Renton's missing sister, and a few heavy handed hints that Eureka has something to do with it. There are a few hooks to keep us wanting more, but I'm not "gripped" yet.

A nice selection: Interviews with the original voice cast and a commentary by the production team. The usual trailers are also in effect (.Hack//Twilight, Panda Z and My-Hime). I might also add that the menu's are beautifully put together. Less is definitely more here.
8
A handsome series with nice humour, but could do with a little more urgency.