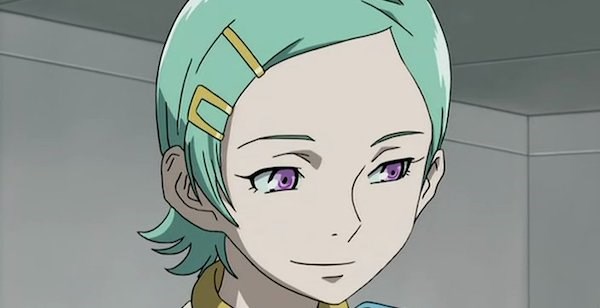 We've all felt unhappy with our lot in life at one point or another, frustrated that we can't fulfil our dreams or just sad that you’re stuck in school. All of those things apply to Renton Thurston, a 14 year old boy who is looking for something to help ease the frustration he feels. Especially as he can't seem to get anywhere with his one hobby of lifting (essentially surfing - in the sky). This all changes one day when a gigantic mech - Nirvash - comes crashing into his bedroom, piloted by the soft spoken and adorable Eureka. Following this Renton finds himself signing up with Eureka's oddball crew Gekkostate - led by famous lifter Holland Novak - and plunged into a fifty episode journey of self discovery, growth, and lots of mecha action, with plenty of romance thrown into the mix.

Anime Limited have once again dived into the archives to bring us the Blu-ray edition of this mid-2000s classic from studio Bones. Most of the people reading this review will have heard of this show in one way or another, maybe even owning copies of the old Beez Entertainment releases. Perhaps the main question will be is this new Blu-ray edition an essential purchase? I'm pleased to report this is a more than worthwhile purchase for anyone interested in seeing a modern classic, and even for existing fans of the show to double dip. This being from Bones the animation was top notch for the time and, as expected, the Blu-ray transfer really brings out the best in it. The world of Eureka Seven shows no hint of it’s age and the frequent airborne action sequences look sumptuous on the new transfer.

The cast and plot prove to be as engaging as the animation. While the story is sprawling and epic, it manages to be easy to follow [Ed. - Unlike Eureka Seven - Hi Evolution] and somehow avoids tying itself up in knots, with all fifty episodes contributing something to the overall story. Only one arc, involving the repair of the Gekko, starts to slide into filler territory.

The cast is sprawling on both sides of the conflict. We are presented with an awful lot of characters, many of whom are simply background decoration, though they do help give the world a little colour. The main cast fare better all having rich and, mostly, well developed arcs and personalities. The writers also smartly make their heroes fallible and their villains human. Renton, for all of his good intentions, can be whiny and impulsive leading to him making mistakes. The show also denies him the usual anime hero trick of having the world and the people in it change to suit how he thinks it, and they, should be. Renton has to develop and learn to work in the world. Eureka is a capable fighter on her own and, despite falling into damsel in distress mode on occasion, she is Renton's equal and partner. The only misstep in the cast is Eureka's 'children', three Scrappy Doo's who eat up screen time by being obnoxious, abusive, and massively annoying. So badly handled are they that even when they are given stronger material, towards the end of the run, I still wanted Renton to use the Nirvash to squash them.

I honestly can't recommend this show and its upgraded release enough, both are essential additions to any anime fan’s collection.

9
Eureka Seven is a fantastic, sprawling, beautiful modern epic, do not miss out on this one.
LATEST REVIEWS