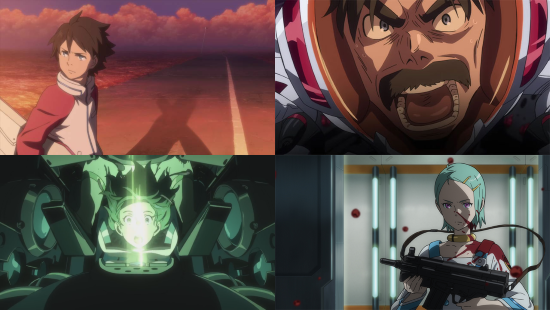 Eureka Seven - Hi Evolution is a disaster of a film for newcomers to the franchise. Other than the visual flair of the opening sequence - and the teaser for part two at the end of the film promising a rather ridiculous set of events for the next film - there is not much to actually enjoy here. If you haven’t seen the series, give this film a miss and watch that instead.

A decade since the original series finished; Eureka Seven has been brought back with an Evangelion style reimagining, which comes in the form of a new movie trilogy. The first of which is Eureka Seven - Hi Evolution, a film that recently premiered at Scotland Loves Anime.

We should begin by stating that this review is from the perspective of someone who has not seen the original series and is coming to the franchise as a complete newcomer. We approached it this way as during our recent interview with Tomoki Kyoda (the director of Eureka Seven - Hi Evolution) - which took place at the Glasgow weekend of Scotland Loves Anime - he stated that “we wanted the film to appeal to newcomers but it is based on a series from ten years ago and so we had to make sure the fans of the series were also happy with it”. This strongly implied that this film should be accessible to newcomers. If we are to judge Eureka Seven - Hi Evolution on this basis alone; it is an abject failure.

The film starts with an event which is supposed to be significant in the show, dubbed “The Summer of Love”. It’s a visually impressive battle that has the military fighting against the antibodies of the Scub Coral (something which is never adequately explained in the film). Now, the problem here is that it we are dropped straight into this fight, with absolutely no context or explanation of what is happening. Thus making the whole scene visually impressive but rather confusing. This in turn establishes that the film assumes the viewer has seen the original series and knows the details regarding Summer of Love and its significance to the story.  Once the opening scenes are over with we skip forwards to the protagonist of the series Renton, who is being chased by dogs as well as providing narration. This acts as the framing device for the film as from here on out the film uses footage from the old TV show, and even retains the aspect 4:3 aspect ratio.

Now reusing footage and integrating it into a new film is fine if done correctly. Here the film executes this in the most bizarre and confusing way possible. Using the words “PLAY BACK” and “PLAY FORWARD” with the time difference shown (all too breifly, and often accomanyied by an impossible to digest wall of text), makes for a very difficult viewing experience. A flashback is fine if it makes sense in the context of the current story. However, the problem with Eureka Seven - Hi Evolution is that it never establishes any background for these until the very end. Meaning that it is layering flashbacks and flash forwards on top of each other, without establishing any context. This makes for a sequence of events that people who have not seen the original will be extremely confused by. At the time of viewing the film we even discussed that the only way to legitimately follow all the jumping around, would be with a Gantt chart and the Wikipedia article for the original series.

This means that the narrative is disjointed to the point that the film will show one scene where characters will have a conversation and then it will flashback to the events that were the main focus of the conversation. Then the film will then flashback to a time before those events and then will randomly flash forward to an event that took place between the first two events. This makes the plot incredibly hard to follow, since Eureka Seven - Hi Evolution plays around with time so much it is almost impossible to tell which events happened when. This is especially true if you have never seen the series.

Often scenes are simply presented without context, or at least no discernable context from this viewer's perspective. The film will show some scenes that - if they had dedicated time to establish the characters - could have had a big impact, but simply fall flat. Content wise Eureka Seven - Hi Evolution hardly focuses on any action scenes, instead showing conversation points largely revolving around Renton and his adoptive parents. From these scenes there hints of them being interesting characters, that seem to suggest the series handled them better, but Eureka Seven - Hi Evolution fails to give me any incentive to care. Eureka Seven - Hi Evolution feels like a refresher for fans who watched the original, rather than a gateway for new fans.

Though the main problem with the Eureka Seven - Hi Evolution itself is that there is simply no reason for it to exist. It alienates new fans, while not providing anything worthwhile that existing fans could not get from the series. It takes old footage from a pre-existing show and puts it all in completely the wrong order. The film is akin to someone who has just came back from their holiday and had a photo album made of their trip: They flip through it at random remembering how good that moment was, then flipping back to photos from a day earlier, then to photos a day before that, and then to photos that take place after the photos from the first page. They then tell you how good these moments where, but don’t tell you why. 3
This film may have had an interesting story to tell, too bad it tried to tell it in the wrong order.