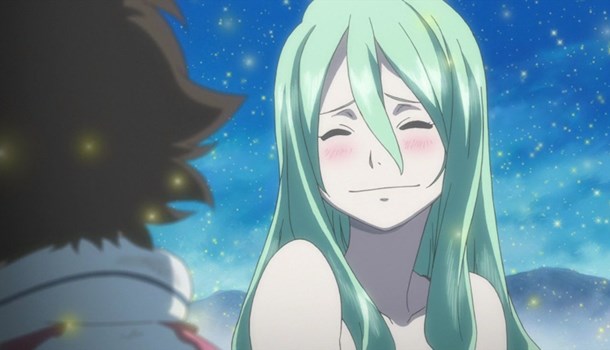 Eureka Seven is amongst my personal favourite anime franchises having repeatedly viewed the anime, read the prequel manga and played the somewhat weird PSP game in order to fully enjoy the unique Shoji Kawamori's mecha designs which the game and series uses. So, when the news of a two-hour, high budget motion picture based on the franchise and using the same production team as the Eureka Seven anime landed back in 2009 my heart skipped a beat with pure unadulterated joy... at least, until I saw it for myself. My initial advice for those who have seen the series before would be to forget everything you loved about the characters from the series.

The Eureka Seven motion picture, subtitled “Good Night, Sleep Tight, Young Lovers” in the west, unfortunately suffers from similar troubles to Rahxephon: Pluralitas Concentio, which Studio Bones released back in 2004 in that it they both followed on from or retold the story presented within the anime series with which they share the same name. Thankfully, it seems like Tomoki Kyoda has learnt his lesson from Rahxephon as Eureka Seven: Good Night, Sleep Tight, Young Lovers has absolutely nothing in common with the series, except for them both sharing the same basic synopsis, universe, characters, environments and the sharing of an occasional scene.

The general synopsis follows the basic premise behind the Eureka Seven series - The Earth is stuffed. Fifty-four years since the turn of the millennium and the planet has undergone radical changes after an alien species, strangely resembling coral, invades the planet and begins to displace and eradicate all traces of humanity. Humanity has not taken this invasion of their planet lightly and is fighting the encroaching hostile force on multiple fronts using biomechanical mecha capable of surfing through the sky on rays of light. Even with these highly manoeuvrable and powerful mecha, humanity is still losing ground to the alien invaders and the planetary rulers have decided to construct the ultimate weapon, the Hammer of God; a giant solar driven particle weapon designed to destroy the heart of the aliens. This weapon, powerful enough to destroy the aliens, will also annihilate the biosphere of the Earth, meaning that the future survival of the human race also depends on a select few who will leave the planet for good.

However, this is not what Eureka Seven is about. It's not about the end of the world; that is merely a driver for the beautiful and fraught young romance story involving a peculiar yet beautiful girl called Eureka and a young enigmatic chap named Renton Thurston. It is this aspect in particular which defines the most significant, perhaps the strongest and potentially the best difference between the Eureka Seven series and this theatrical film. When Good Night, Sleep Tight, Young Lovers begins, you are immediately propelled into the childhood of Renton and Eureka. The two children are friends, almost family, living with the scientists on a civilian research base. Their entourage, the professor Dominic is going away; all is well, everyone is happy, including the two foot tall baby mecha, Nirvash. Then Eureka is kidnapped by the military, and everything changes in both of their lives.

Renton becomes a young corporal in the military, piloting Nirvash who has grown up into a thoroughly annoying yet gorgeous sky-surfing killing machine and, on a military rescue mission to hold back the oncoming alien scourge, he finds his missing Eureka, hiding away inside an abandoned military outpost. What is completely oblivious to Renton, at this extraordinary moment in time, was that their meeting was not only coincidental, but also foretold in a story passed on from a parallel universe and time that the two of them will change the world forever. Awww, bless.

One of the key improvements which can only be delivered with the budget of a theatrical film is the picture, the animation quality and the audio - all of which, when delivered on a Blu-Ray package, are simply breath-taking. When compared to the quality of the television series, there is no comparison. It's very evident in the quality of the end product that a lot of time was spent making something truly beautiful, which brings me to my next point.

Eureka Seven'sTV series is very high on my personal list of favourite anime. It stands to reason, therefore, that the Eureka Seven motion picture would be as well. The film ticks every single box I could ask for; it has the same overall sense of impending doom, the same satisfying ending; it has truly epic mecha action scenes, it has drama and it has the story of young love, all intertwined within a truly spectacular High Definition package which makes your eyes bleed with happiness.

So why, I ask myself, do I still find myself lusting after the series, those fifty episodes where I watched Renton and Eureka meet; their relationships growing as they both realise that they loved each other, their good times and bad, their relationships with the denizens of Gekko State and their pivotal role in liberating the planet ending with perhaps the greatest form of graffiti ever. The series was not Shakespeare. It had plot holes. But, it had character and feeling and it never felt forced. Good Night, Sleep Tight, Young Lovers, as beautiful and as well produced as it is, still comes second place to the original Eureka 7 series.

All it can do, in my mind, is act as a singular beautiful advertisement for a series which got it right the first time around. Eureka Seven: Good Night, Sleep Tight, Young Lovers is definitely worth watching as it is a perfectly adequate movie, and a very entertaining way to spend an evening in front of a Blu-Ray player and a High Definition screen.

As a footnote, and not to divert attention away from the above, but I really wish that Tomoki Kyoda would have just left the characters alone. Why did he have to turn the family of the Gekko into a bunch of immature, idiotic growth accelerated teenagers? What was with the chibi-fied Nirvash? These changes added nothing to the story. The characters as they were in the series would have fit in fine with the compressed storyline of the film. All this does it make me, as a fan of the original, resent what is otherwise a lovely film.

7
Well produced, well made, but poorly characterised and written.