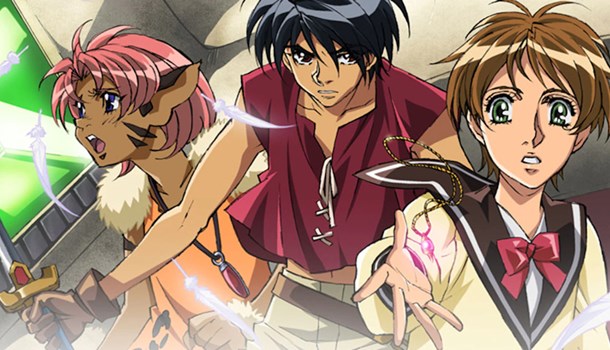 It looks like Beez are entering the UK anime market with more confidence now, and one of the early results is this superb box set of one of the best animated fantasies ever - Escaflowne!

High School student Hitomi is whisked away to the world of Gaia, where the Earth appears in the sky and magic is fused with technology to make one of the richest worlds ever imagined. Hitomi's tarot reading hobby becomes integral in a war between various factions, with her choices and warnings the central driving force in a world coming apart at the seams.

I first saw this series on a set of bloody awful fansubs years ago, but the sheer quality of it shone through regardless. In Escaflowne, we have so many elements coming together that it threatens to be overwheleming - giant mecha, fantasy, romance, action, dragons and politics, but it's this diversity and attention to detail that make the series so rewarding. Yoko Kanno's soundtrack drives the action onward, and the central cast are attractive and engaging. Young King-to-be Van and his childhood friend Meryle (cutest catgirl in fantasy) begin as the cenral characters, but the dashing young Knight Allan and his band of mercanaries give them a run for their money later on. The diabolical forces of Daibach are secretive and even sympathetic, but inevitably make a great foil for our heroes.

As a 26 episode TV series, you'll have to dedicate your time to it, but given the quality, the fact that you get the unedited subbed version and not the slice'n'dice kiddie remake, you'll find it all worthwhile. If Beez continue to release anime of this quality, they'll soon make a well deserved name for themselves alongside MVM, Manga and ADV.

10
Fantasy doesn't get more fantastic than this!