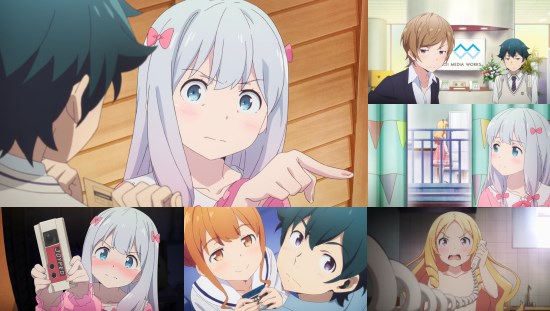 Believe it or not, it's been seven years since the first season of Oreimo's anime adaptation aired, and plenty has changed in that intervening period. The series itself was the catalyst for a boom in "little sister" stories of various stripes, before Oreimo itself returned for a second season that set fire to a lot of the good will its first series had surprisingly generated. Having brought us stories both sweet and sordid, we're now in an era in which the entire genre has peaked, been lampooned and then slipped into our distant memories - a timeline which makes the existence of Eromanga-sensei in 2017 feel all the more anachronistic.

Masamune Izumi is a young man who dotes upon his younger, adoptive sister - or at least he would if she wasn't a total shut-in. Instead, all Masamune can do is leave food and snacks outside his sister's door, collect finished meals, and bring whatever she requests in code by banging on the floor. When he isn't serving her beck and call, our protagonist is also a mildly successful light novel author, whose success largely seems predicated upon the popular illustrations contained within - illustrations provided by a mysterious artist known only as Eromanga-sensei. Just who is Eromanga-sensei? The truth will shock you...

Okay, the truth won't shock you at all, and by the end of episode one said artist's identity is revealed after a near-disastrous live-streaming mistake. The big question from there is how this effects the relationship between brother and sister - a question given more urgency thanks to the proximity of a rival (and far more successful) light novel author who is hell-bent on snatching away Eromanga-sensei's talents for her own.

So runs the set-up for a predictable comedy series thus far that toys with the love between siblings in much the same way as Oreimo's later episodes did (although it's okay this time because they're not blood-related - insert your own exasperated tone for that sentence here), and similarly barrels down the same over-the-top comedy route that destroyed much of my goodwill for Oreimo as it jumped from sharp otaku comedy into the realms of the ridiculous.

You can almost feel a tone of desperation coming from these early episodes of Eromanga-sensei as they try to engage the viewer. "Hey hey, look at this girl talking about dicks! Oh, and look, this character is playing the piano naked! What crazy things can happen next?" the series shouts from the rooftops, almost entirely forgetting its main relationship between Masamune and sister Sagiri a lot of the time in the process.

This isn't to say that everything hear falls flat - there are some great one-liners and smart little gags, and visually the show has the same kind of cutesy, colourful and ultimately eye-catching aesthetic that keeps you coming back for its bright visuals and pleasing character designs.

The problem is that the show tries to exist in a genre that has been thoroughly lampooned - perhaps this is down to my own reading of light novel series My Little Sister Can Read Kanji which skewers that genre expertly - but you could persuade people that this series came out in 2011 or 2012 and most wouldn't bat an eyelid beyond the uptick in production values. Anime has moved on since Oreimo, but this series seems stuck in that same groove, and feels dated as a result. Perhaps if this adaptation had even tried to move away from the spectre of Oreimo in terms of character designs, music or presentation it might have felt a little fresher, but given how dedicated it is to following in those footsteps it seems doomed to a future wherein it's forever remembered as a second-rate Oreimo offshoot.

Having gone into this series with an admittedly slim hope of it recapturing the magic which Oreimo's season first brought our way (and I still assert that series works in its own right as a "modern Genshiken" of sorts), I suppose I shouldn't be too surprised that those hopes have been dashed. What has surprised me is how outdated Eromanga-sensei feels - a staunch hold-out in a world that has moved on in the last five or six years. That isn't to say that it's devoid of entertainment, and it certainly has a pleasing aesthetic and a few funny moments, but that really isn't enough to grant a show like this a free pass.

You can currently watch Eromanga-sensei in streaming form on Crunchyroll.

5
Its bright visuals are appealing and it lands some good gags, but it isn't enough to stop Eromanga-sensei from feeling like an anachronism.
LATEST REVIEWS