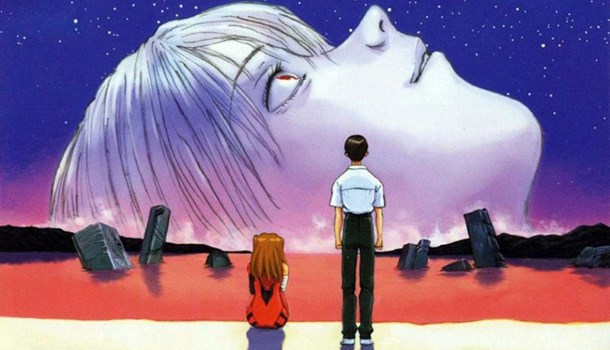 Evangelion fans tend to fall into one of two categories: those that love End of Evangelion and those that hate it. Few are lukewarm, and perhaps the film's greatest strength is that it always provokes a reaction, positive or negative. Either way, End of Evangelion delivers a savage punch to the viewer.

The film is unrelenting, unforgiving and extremely brutal. Whilst you'll never be short of violent and excessive anime, EoE shocks because of the shift in the story dynamic - where the series is thoughtful and dark, here it becomes something else altogether. Characters that have been built up over 24 episodes are literally tormented to breaking point. The attack on NERV HQ is probably the most shocking aspect of the production because it's humans killing humans. The charnel house that follows should have moved the package into an 18 certificate, but in a baffling move by the BBFC it retains a 15 rating.

After the action is all over, the film shifts into apocalyptic revelations, with the fate of humanity itself to be decided by a 14 year old boy. Depending on how philosophical you are, you'll either love the challenging imagery that follows or hate it.

The animation quality varies throughout the film, with the final 20 minutes echoing the series ending, with live action and strange squiggly lines mingling together as a voiceover debates the meaning of human existance. I imagine that this will appeal to the more philosophical amongst you, but for action junkies it may start to get a bit confusing from this point on.

I always took End of Evangelion to be Anno's virtual tantrum (although I was never sure who it was aimed at). He literally destroys the world and characters he created, examining every personality flaw and dealing death to just about everyone except the character he had manouvered into deserving it the most. Shinji's transition from troubled teen to seriously disturbed young adult was a jarring experience, and not one I cared for. Whilst the revelations in End of Evangelion are interesting, I wouldn't describe the overall experience as enjoyable. As films go, this is about as challenging as they get.

6
Technically a masterpeice of thought-provoking cinema. For me, a depressing 90 minutes of pointless carnage.