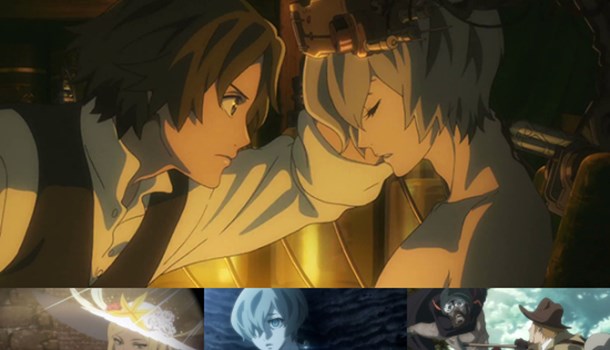 Who'd want to be in charge of an anime production? The prospect of creating three films based on original novels from author Project Itoh seems like a simple enough proposition, yet here we are talking about what would have been the third in that trio of movies without any sign of the other two at the time of writing, thanks in part to production delays and further exacerbated by the recent collapse of Manglobe. Still, this isn't too big an issue as all three films are stand-alone projects, and so it goes that Scotland Loves Anime granted us an opportunity to take a look at Wit Studio's work within this project, Empire of Corpses.

The core premise of the film is a fascinating one, taking us into a steampunk-infused Victorian era where a major technological breakthrough has been made - the ability to reanimate corpses and have them effectively serve as slave labour, be it fighting in a war or working in hard labour without any pesky workers' rights to worry about.

However, this state of affairs isn't good enough for John Watson (yes, be prepared for lots of famous names of the era to be dropped into this story for no good reason other than to name-check them), who is keenly - and illegally - searching for the 21 grams that go missing when a person dies, thought to be their soul. After all, imagine the ability to resurrect a great mind or a lost loved one body and soul? To this end, Watson has reanimated his friend Friday, who currently serves as his lumbering assistant, but whom Watson hopes one day will be restored to at least something approaching his former human glory.

When our protagonist's illegal acts finally catch up with him, rather than incarcerate his brilliant scientific mind the powers that be choose to put him to work tracking down "The Notes" belonging to one Victor Frankenstein, the only man who has managed to create a zombie that its own soul and sense of free will. Watson's task is to destroy these notes out of fear for the havoc that Frankenstein's vengeful "monster" might wreak upon humanity, but Watson himself is keen to see these notes in the hope of furthering his own research. The result is an adventure that takes Watson and a growing motley crew of others with similar goals across Afghanistan and Japan before finding their worst nightmare coming true as "The One" puts his plan to subjugate and "improve" humanity into action.

Before breaking down the film, it's probably worth noting that the original novel upon which the film is based wasn't finished by Project Itoh himself - he sadly passed away from cancer having finished only 30 or so pages, leaving a friend to take over and finish the novel based on his notes.

This is important to mention on two counts. Firstly, by far the most interesting thing about Empire of Corpses is its approach to death on both individual and collective levels, imagining the deceases as a massive untapped workforce while also pondering whether an individual might want to be of use to those he leaves behind in body if not in spirit upon his passing. Set against the author's own tragic demise at an early age, it's a poignant train of thought, but one that the film never manages to find time to actively explore in any detail, which is very much to its detriment.

The other noteworthy factor in the author's passing is that the first act of this film is really rather good - it sets up its premise and ideals in a slick and confident fashion that leaves you wanting to see it explored further... and that's where the film goes off the rails very badly indeed. I couldn't say whether this is the point where a new author takes over in the source material, but it certainly feels like it judged solely upon this anime adaptation.

The problem with the remainder of the film isn't that it does anything wrong, it's that it does nothing right. The interesting points of the initial setup are quickly forgotten, leaving in their wake a dull, turgid tale that slowly but surely ties itself in knots to the point where it's hard to really know or care about what anyone is doing and why. The story creaks along to a climax that basically goes down the zombie apocalypse route, and somehow even manages to do that in such an indirect way that it's impossible to engage with on any level. You get the impression that the narrative thinks it can save itself with steampunk babble and shouting about Charles Babbage every now and then, but this only serves to further add to the impression that you're actually watching some interminably dull nonsense that is outstaying its welcome.

The only saving grace to all of this is that the film looks gorgeous for the most part - the steampunk aesthetic is an acquired taste but it's carried off masterfully here, and the film's characters, backgrounds and designs are all wonderfully crafted and a real joy to behold. We wouldn't blame you if you wanted to check out the film for its animation alone, and if you can cope with the dull plot then this is certainly a treat for the eyes.

Sadly, though, we can't give this film a pass on visuals alone, and Empire of Corpses somehow manages to take a premise so full of potential and valuable things to say and wastes it all utterly. Its action never brings you to the edge of your seat, its emotion never moves you to tears and its subject matter never engages your brain - all things that a good science-fiction story should be able to do, but all of that is lost in the midst of a workmanlike tale so bland that it might as well have been written by one of the shambling reanimated corpses of the story itself, so lifeless is its existence.

4
A visually enjoyable film without a story to match; the result is a dull, lifeless corpse of a movie.
LATEST REVIEWS