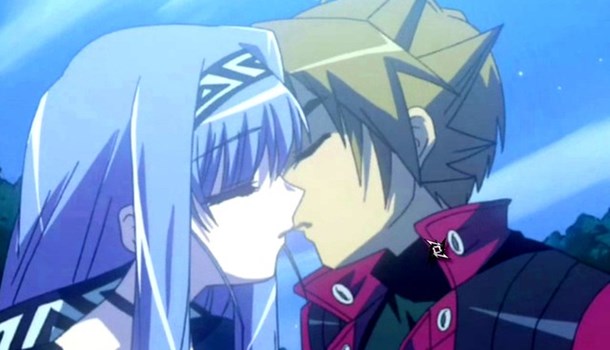 The journey to Edel Garden may be almost over, but that doesn't mean that life is about to get any easier for Cou and the Edel Raid he is assisting on her journey, Reverie Metherlance.  Indeed, things couldn't be much more difficult as the story continues from where volume five left off, with Cou, Ren, Cisqua and company in a decidedly tight spot, and the revelation that Edel Garden is in fact the base of Arc Aile's sworn enemy, Chaos Choir.

So, the five episodes on volume six of Elemental Gelade chronicle the closing stages of Ren and Cou's difficult journey while all out war erupts around them, and with worse to come Ren finds herself with an extremely difficult choice to make even before the series reaches its real climax.

You could probably wax lyrical about this show's portrayals of discrimination and oppression, and how love can conquer these man-made barriers to create a wonderful new world for all of us... But let's be honest, we're watching Elemental Gelade for some cool fight scenes and to see if Cou and Ren get together at the end of it all.  Oddly considering this, the series never really got into the swing of its fight scenes quite like you might expect, with most of the main players ending up with pretty generic fighting skills which left any battles feeling a bit stale with a 'seen it all before' feeling hanging over them.  The climactic battle of the series does manage to impress however, rather brief and monologue-filled though it is.

I don't think it's too much of a spoiler to mention that these final episodes bring everything you'd expect to see from this genre of show, from reuniting the major characters with many of the other faces they've met along the way (well, the ones who managed to survive at least) to some large-scale final fights and battles, with plenty of despair followed by renewed hopes to go with it.  Yes, it's all rather predictable, but that isn't necessarily a bad thing if it's carried off well, and Elemental Gelade does a pretty respectable job of ticking all of the boxes while still delivering a sufficiently watchable finale to what has been a slightly hit and miss but overall enjoyable series.

To put it bluntly, Elemental Gelade isn't going to win any awards for originality, but it has managed to create (or rather adapt from the manga) a cast of likeable enough characters to at least leave you caring about their fates at the end of it, and that's perhaps where this show manages to bring itself slightly above the myriad run-of-the-mill shows of this ilk out there.  If you're looking for a show that isn't too heavy, and blends comedy with action in a reasonably run way, then you could probably do worse than giving Elemental Gelade a shot.  It won't blow you away by any accounts, but it may be a decent snack to satiate your anime needs for a few hours.

7
A predictable end to a predictable anime, yet it still manages to entertain.
LATEST REVIEWS