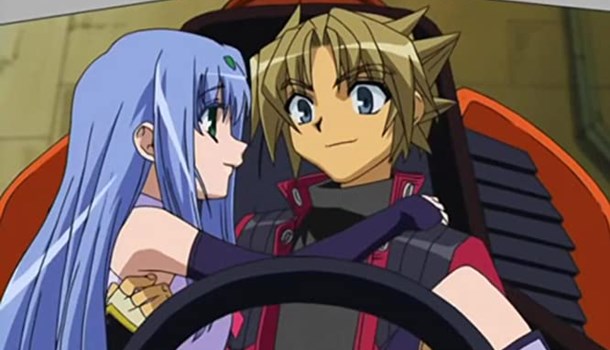 At last, as we reach the penultimate volume of Elemental Gelade on DVD, so Ren's quest, aided by Cou and friends, comes towards its close.  As the series has progressed, so my enjoyment of this anime has taken a turn for the better.  Can this improvement continue across the four episodes that make up volume five?

At the end of the last volume, we were left with the somewhat surprising sight of Viro, previously only something of a Coud van Giruet groupie, Reacting with Cou after they found themselves pitted against Marl, a zombie-fied (for want of a better word) bad guy first encountered earlier in the series.  I'm sure it isn't too much of a spoiler to say that the duo soon manage to defeat their opponent, albeit in a rather uncoordinated style, but in Reacting with Cou, Viro has inadvertently revealed much about her true identity.  But exactly what are her motives?

From here on in, much of this volume of Elemental Gelade handles the inevitable Cou/Ren/Viro love triangle that springs up from the proceedings, with a particular focus on Viro's own feelings and goals.  While the storyline which unfolds is one of the oldest ones in the animated series book, the whole affair somehow manages to remain strangely engaging, even as it becomes patently obvious what's going to happen.  Moving beyond that storyline, and with the progression of the group's journey, so we learn even more shocking truths about Ren's ultimate destination, Edel Garden, as well as their powerful enemy, Chaos Choir.

After being a little hit and miss early on, by this volume Elemental Gelade seems to have gotten its pacing just right, keeping things moving along with rushing anything, and still finding time for the odd burst of humour - Although it's used far more sparsely than seen earlier in the series, this actually makes the brief bouts of light relief all the more welcome.  While I wouldn't want to try and delve too deep into any of the main character's motivations for fear of drowning in a pool of nothingness, the relative simplicity of it all doesn't take away from the basic fact that, in these later episodes, Elemental Gelade is simply enjoyable to watch.  It won't tax your brains or your emotions too hard, that's for sure, but as pure entertainment it does its job and does it well.

Ultimately, if there's one proof of this series' ability to drag even this snobby old anime reviewer into its net, it's this - Come the end of previous volumes, I could easily take or leave the next instalment without any real thought.  However, this time around come the closing titles of the disc's last episode, I found myself thinking - "I wonder what'll happen next..."

7
For all its frequent predictability, this show somehow manages to remain a wholly enjoyable affair.
LATEST REVIEWS