Ef - A Tale of Memories 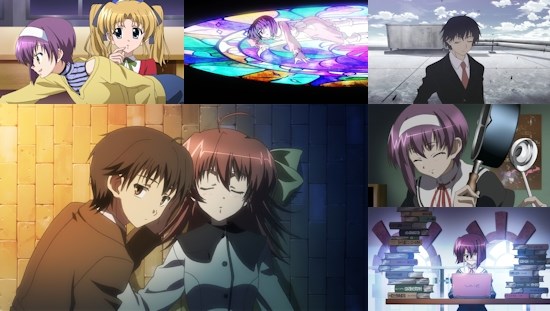 Ef - A Tale of Memories

If Bakuman has taught us anything, it's that mixing a career as a professional manga artist with life as a high school student can be a decidedly tough proposition. This is also a harsh lesson being learned by one of the dual protagonists of this visual novel adaptation produced by SHAFT, and now hitting the UK on DVD courtesy of MVM Entertainment.

In effect, this series is actually two tales, only one of which is explicitly related to the concept of memory. First though, let's tackle the story of the amusingly named Hiro Hirono, that aforementioned manga artist whose struggles with work are soon accompanied by struggles in love, as he becomes the pivotal point in a love triangle between the mischievous and out-going Miyako Miyamura and childhood friend Kei Shindo, who sees him as more than just the big brother figure she playfully refers to him as.

Alongside this, the series also treats us to the story of Renji Asou, a rather unremarkable young lad who doesn't really know what he wants to do with his life. This starts to change when he encounters a girl named Chihiro sitting alone at a disused railway station. The two immediately strike up a friendship, but there's clearly something "off" about Chihiro beyond the eye patch that she sports, and once this is revealed it's clear that any developing relationship between these two individuals is going to have to tread a difficult path.

As the show switches between (and occasionally intertwines) these two stories, throwing the slightest hint of the supernatural into the mix to add a little spice, there's plenty of romantic drama to be found here and both story arcs prove to be narratively strong, capable of fully leveraging their cast of characters to full effect. If you're a fan of other visual novel adaptations such as Clannad, then Ef perhaps can't quite reach the same heights of comedy or drama but will still press a lot of the same buttons without a doubt.

Accentuating the show's story telling is SHAFT and director Akiyuki Shinbo's typically striking visual presentation - although this series clearly comes from a time before the studio had bigger budgets to play with thanks largely to the success of Bakemonogatari, it never ceases to be eye-catching in its presentation. Admittedly some of the show's visual flourishes can feel forced or over-bearing, but as a whole the unique angles, use of colour and other touches add greatly to the viewing experience, and during one or two of the show's darkest character-driven moments the visuals truly accentuated the impact of those scenes in a way that more traditional presentations of those scenes would doubtless fail to do. Even when it isn't trying to stand out, there are some gorgeous backdrops and scenery to be found behind the show's eye-catching character designs, to ensure that the entire viewing experience is a feast for your retina.

The soundtrack to the series is also decidedly enjoyable, with most of the background music lifted directly from the original game (which is no bad thing), and punctuated by some great opening and ending themes. The Japanese voice cast also reprise their roles from the visual novel to good effect, while the English dub cast also do a stellar job with the sole exception of Hiro, whose voice simply doesn't match his character in the slightest - a sole black mark against the otherwise good presentation of the series.

Given how few visual novel adaptations tend to make it to the UK (with good reason admittedly, a lot of them aren't all that great), it's wonderful to see another higher quality adaptations make it to our shores in the form of Ef. Sure, we could bemoan the lack of a Blu-Ray to fully make the most of the show's visuals, but this DVD release still looks plenty good enough, and more importantly it delivers in terms of its story-telling. As I mentioned earlier, if you're a fan of Clannad then this is a series you should really consider picking up, and we'll be waiting with bating breath to see if the second season of this show, A Tale of Melodies, can impress us similarly.

8
Its striking visuals belie the show's low budget to accentuate a strong story which blends its drama and romance with a light comic touch superbly.
LATEST REVIEWS