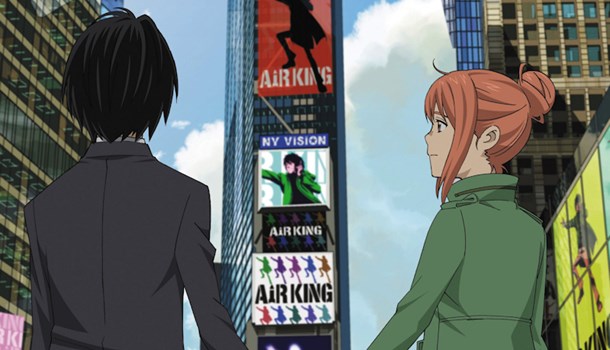 The end of Eden of the East's TV anime series is a bit of a cliff hanger and, while providing a quite satisfying finish to the minor issue of a pending missile crisis through the use of sheer nerd power and posing, the ending simply raises more questions than it answers. I mean, seriously, who on earth would pick up the telephone and be asked to be made a king, and what happened to the rest of the Selecao? Is the game over? Where will all 20,000 of those naked NEETs get their underpants from?

Thankfully, all seems set to be answered in the first sequel movie to Eden of the East, The King of Eden. The film begins six months or so after the series ends and after Takizawa makes his special request to his concierge Juiz. Takizawa has gone missing, his memory wiped again after making his request, and his phone is in the soft caring hands of Saki along with a message to meet him where they originally met.  Saki is not alone thankfully. Her colleagues at Eden of the East are supporting her on her hunt for the missing Takizawa, as they simultaneously develop their company from a small college outfit into a bustling successful Internet startup company.

If life was this easy, everything would be hunky-dory, but this is Eden of the East we are talking about, so everything is not that simple.

The missing variables in the equation are the intentions of the remaining Selecao, all of whom have been categorically annoyed by Takizawa’s request to be king before his memory was wiped. The attentions of these maniacal, powerful persons are set towards Saki as she sets out for America and finds herself followed by misfortune, an unknown assassin and non-stop harassment. The end game of the Selecao, however, is still shrouded in mystery, and the smell of Tomahawk cruise missiles is in the air yet again.

The problem with Eden of the East is that its story is based on a single long arc which began in the first episode of the series and continues all the way to the end. The series was originally meant to be in two halves of eleven episodes apiece with the story spanning the two series; however, due to reasons unknown the production company dropped the second season and pushed two films ahead instead. The King of Eden is very much a small slice of the overall story and consists of the first half of this would-be second season. Unfortunately, due to this, The King of Eden suffers from inconsistent pacing throughout as it attempts to cram five episodes of story into a seventy-five minute feature. In the end, we are left with yet another cliff hanger and a film where not a lot happens except for some disjointed assassination attempts,  a couple of well-placed missile launches, a few hacking attempts and a cute ride on a merry-go-round. The questions at the beginning of the film and from the end of the series remain, and only in the last few minutes of The King of Eden do we even get a hint on what the end of Mr Outside’s game will be.

Frankly, it’s frustrating that after watching a feature film, you are none the wiser as to what is going on. But then again, that is not what The King of Eden is about. This feature is less about the motives and drive of the Selecao, and more about those that make Eden of the East so compelling - the characters. The relationship between Takizawa and Saki (despite Takizawa’s self-inflicted chronic amnesia); the nerd nest of Eden of the East Company and the Selecao each make the franchise truly a pleasure to delve into.

However, all this fluff aside, I can’t wait to see how the Selecao game will end in the second film (coming soon...) - I want to know whose vision of Japan will win out and how they will achieve victory. Who will find themselves removed from the game by the mysterious Supporter? Only time, and the second feature, Paradise Lost, will tell.

8
A worthy follow on from the film, and a strong foundation for Eden of the East's final instalment.