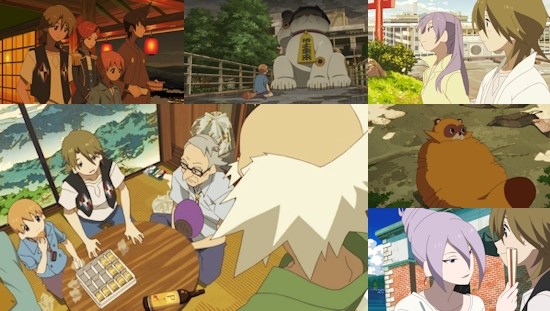 As the former Japanese capital city and a fascinating location in its own right, there's no shortage of heritage and history to be found within the confines of Kyoto. What better location to explore the relationship between tengu and tanuki in this story written by The Tatami Galaxy's author?

The Eccentric Family, or Uchouten Kazoku as it's known in Japan, imagines a rather different Kyoto to the norm - one where legendary creatures known as tengu soar in the skies, while the equally mythical racoon-like creatures known as tanuki scuttle around the streets, blending into human society by transforming themselves into human form at the drop of the hat.

This series follows one particular family of tanuki, the Shimogamo. With the death of their influential father still reasonably fresh in their minds, the four brothers of the family and their mother try to get by in the knowledge that the power their family wielded is on the wane, leaving them with diminishing respectability as other more affluent tanuki families make the most of the vacuum left behind. In the meantime, an indvidual known as Benten who herself wields significant power as the head of a group known as The Friday Fellows seems to skirt between supporting the various tanuki families on the one hand while threatening to turn them into a delicious stew with the other.

Beyond this, it's rather difficult to pin down exactly what the series purports to be about - these early episodes are driven far more by character than by narrative, with any story beats primarily designed to allow us to become accustomed to the show's cast and the relationships between them. For some shows this would be a recipe for boredom, but in The Eccentric Family's case it proves to be a master stroke - all of the main characters are fun or fascinating individuals to watch in their own right, and their interactions are just as enjoyable to watch. This is especially true of the Shimogamo family themselves - with brothers that range from protagonist Yasaburou, who enjoys using his shape-shifting ability to turn into a high school girl purely to tease the family's aged tengu acquintance, through to their pool playing master of a mother, the word "eccentric" certainly sums up these characters without being their sole raison d'être. Yasaburou and his brothers are all capable of providing comic turns one moment and heart-felt moments of reflection the next as they quickly ingratiate themselves with the viewer.

Where the series really excels however is in its sense of world-building - in no time at all you're integrated into the show's supernatural world to the point where you can simultaneously both marvel at and not be fazed by flying parlours that run on alcohol or tengu springing from building to building and floating around. Kyoto itself serves as a marvellous backdrop to all this, giving you some beautiful scenery to guide the series along as well as a pleasing bustling one as people go about their business with little idea of the unusual goings-on around them or above their heads.

I realise that such vague assertions as to the quality of a series without said series having any real goals or obvious "flow" is a strange one, but in essence that's exactly what The Eccentric Family is at this point - an odd and quirky little series, but one that is clearly comfortable in its proverbial shoes and more than willing to take anyone along for the ride whose willing to just sit back and go with the flow. It may lack the immediacy of a lot of other series as a result of this laid-back attitude, but if you're happy to watch without prejudice in the knowledge that this isn't going to be a frenetically-paced show then you'll be rewarded handsomely in terms of both entertainment and visuals. If it manages to add a compelling over-arching story to this already heavy blend, this could well be one of the year's best new series.

You can currently watch The Eccentric Family in streaming form on Crunchyroll.

8
Even though it keeps its cards close to its chest at this stage, the setting and characters of this series make it a joy to behold so far, and a contender for one of the summer's best.
LATEST REVIEWS