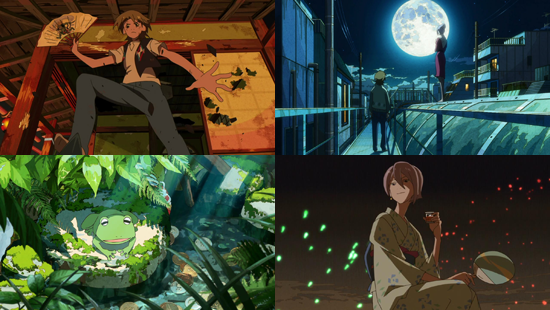 Fictional stories have always sought to inhabit real places and familiar settings, both for a greater sense of verisimilitude and to speak more meaningfully about the thoughts and foibles of the people that live there. Anime is no exception - ever since Kasukabe in Saitama noticed a big uptick in visitors who wanted to explore the home of Lucky Star, the phenomenon of "otaku tourism" has encouraged increasing numbers of shows to be projected against actual locations to bring in some sightseeing custom alongside the disc sales. The Eccentric Family is also a signal example of this otaku tourism in action - as the characters live in the ancient Japanese capital of Kyoto, dozens of the city's organisations are thanked in the credits and the mid-episode eyecatches even include street maps to help you navigate the landmarks! Kyoto is city that's over a millennium old though and its storied stones have a supernatural spirit that can't be conveyed just by the flat photos in a travel brochure - this is the depth beyond the backdrop that The Eccentric Family seeks to push into, and something that the drawn freedom of the anime medium is well-suited to. Does this tale of mysterious creatures in a modern city finally reveal the true fascination of Kyoto, or would it be easier to stick to a Lonely Planet guidebook?

The Eccentric Family is notable for being adapted from a full-length novel as opposed to a light novel or a manga. It describes a Kyoto that has three different guises - the thousands of shrines and temples make it a place powerful with magic of old gods, so as much as Kyoto is a human city the people who live there are floating between two spheres, unwittingly sharing the skies above it with flying tengu goblins while the earth below it is the abode of scampering tanuki raccoons. The eccentric family in question are the Shimogamo - a family of intelligent tanuki with the power to transform themselves into any shape they like, whether they want to walk tall like a human, enjoy the calmness of a tree or even pretend to be a statue to set up a practical joke for some unsuspecting tourist. That's the preoccupation of Yasaburo Shimogamo - for all that his family and exasperated tengu magic teacher would wish he'd settle down and get more involved in tanuki society, Yasaburo is quite happy to spend his days living wild and carefree, using his shapeshifting powers to smoothly move between all three realms of Kyoto and goof off in the fun and endless game that we call life. Yasaburo's easygoing nature makes him well able to involve himself in the affairs of the weird and wonderful inhabitants of ancient Kyoto, but he can never afford to be too casual - for when all's said and done Yasaburo's still a raccoon and there may come a day when he's caught in a snare and boiled into dinner in a human's hot pot! Yasaburo's not too worried though - he'll cross that bridge when he comes to it, and there's still a lot to see when you see the gleaming river run underneath it.

What you can see is also gorgeous. The Eccentric Family looks absolutely wonderful, with rich and colourful background art evocative of natural splendour and human artistry, whether it be the lustrous gold and healthy crimson of an autumn forest or the vibrant clutter of a busy apartment. Even the bottom of a well is a little paradise of green ferns and blue lagoons - the art makes The Eccentric Family well worth the Blu-Ray upgrade. Another easily-overlooked but interesting feature is that the opening and ending sequences of the anime have had proper redrawn English text for the credits in them. This pleases me - anime producers these days seem terrified of weeaboos, the sort who insist on honorifics while speaking English, hammering out indignant blogs on their keyboards (leading to supine absurdities like in Birdy the Mighty: Decode where the ending sequence was a tiny box with English credits on one side, or more recent anime padding out the running time with two consecutive credit sequences) as if they're fluent in Japanese, so well done to The Eccentric Family for putting a bit more effort in and standing against the tide.

Speaking of opening and ending sequences, both of the sequences used for The Eccentric Family have cheery, jaunty theme tunes that also avoid the trap of using self-consciously Culturally Significant music for ancient Kyoto, so you stay in the right frame mind to bounce along and enjoy the tanukis' antics and not be dutifully stuck in your seat absorbing the spiel about the sights. Although this series has no English dub it's not out of place in a very Japanese show, and the soundtrack as a whole is also entirely pleasant to listen along to as well, from the electronic boot-up of the opening episode narrations to the tinkling piano trills of the bejewelled landscapes.

The style of the characters that walk around the artwork is also fairly atypical - this is most immediately obvious in the square ears. While in still shots it can look like everyone's cauliflower-eared, so's Daniel Craig and his repeated box-office smashes suggest that it doesn't seem to be doing him too much harm! Noses do stand out a bit more - and yes, modern anime is notorious for its non-existent noses - but the style in The Eccentric Family which shows the nostrils but not the nose itself does unfortunately exaggerate them and it does look a bit weird. This is only an intermittent thing from certain angles, though, and in a way it actually does work in the anime's favour - if you watch a Kyoto Animation show like Sound! Euphonium, say, the soft moé characters can look out of place against the photorealistic (if not literally photo-referenced) backgrounds; but here in The Eccentric Family these departures from a typical anime style, as well as giving the show its own memorable distinctive look, mean they fit better in amongst the more painterly backgrounds as well.

These characters also move around in an interesting way. As much as The Eccentric Family is "otaku tourism", it's the best sort of fiction which uses a real-world setting for a natural backdrop rather than awkwardly explaining the significance a landmark has to the action, making characters less glorified tour guides and more actual people living genuine lives. The Eccentric Family has excellent, vivid characterisation of lively, nuanced people. Yasaburo's brother Yujino is stuck in the shape of a frog and trapped down the well, but his understandable moroseness has a more reflective resignation; and while Akadama the tengu is entertaining enough as the cantankerous and petulant old coot who'd never admit he's lonely, given his propensity for abducting children we're left to ask if we really should be so indulgent with disjointed granddads. Especially interesting are the presence of humans in amongst the tanukis. They set up some surreal situations - poor Yasaburo does a heroic job of staying polite when he's at a table with other diners licking their lips at how delicious tanuki tastes - and they continue to develop character as well in the figure of Benten.

In a more trope-bound anime the human character would be the point-of-view ingénue who can have all the rules of the world-setting conveniently exposited at her, but The Eccentric Family neatly flips you over in a judo throw and leaves you wrong-footed, making the human the cuckoo in the nest and the uncomfortable alien intrusion for an intriguing inversion of expectations that simultaneously leaves us feeling more defensive about and protective towards tanukis and tengus despite them being truly alien. If the devil is a gentleman of wealth and taste then a demoness is a lady of grace and courtesy, and Benten is a sinister revelation. A figure of knife-edge caprice balanced by back-handed compliments and impeccably-mannered threats, it's amazing to see how everyone else is absolutely terrified of Benten even while they hold genial and polite conversation with her, accepting her help which they know will have a catch but still need regardless, creepingly aware that they're pawns that are being taken advantage of in some way but they can't work out exactly how. It's a commandingly-delivered and confidently-drawn performance.

As much as Benten's inconstancy is a sword over Yasaburo's head and there's the threat of being gutted for supper, The Eccentric Family takes care not to get too heavy. The tanukis themselves are quite philosophical about the prospect of ending up in a hot pot - everybody's gotta die sometime, Red, and instead of wasting life away on moping around it's instead much better to focus on making merry. Yasaburo and his friends get up to all sorts of magical mischief throughout from aerial firework battles  to careering through town on a runaway tram - it's a gently humorous and good-natured exploration of the peculiar fascinations of Japan's Shinto heritage in a novel way that's not really focused on in other shows, preoccupied with power-magatama and cutting katanas.

That novel approach is a great compliment to The Eccentric Family. I had no real knowledge of this show going into it and little idea of what to expect, and it ended up being quite a pleasant surprise. At first glance an anime with tanuki might make you think that you're just in for congealed, reheated Pom Poko, but that does this show a disservice for it has lots of independent personality. The Eccentric Family brings us a bright and vivacious world with detailed and compelling characters that inhabit the strangeness and delight of Japan's heritage - as we approach the end of 2015, I'm happy to acknowledge The Eccentric Family as one of the highlights of the whole year.

10
A delightful, original bouquet of supernatural scrapes, jolly japes and colourful capers. Absolutely essential viewing for anyone who wants a bit more out of his anime.