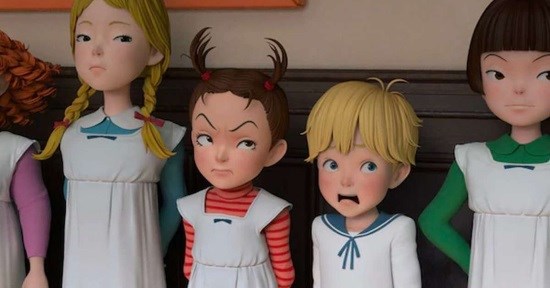 There’s a tangible anticipation when you sit down to watch a new Ghibli film for the first time and sitting down to see Earwig and the Witch was no different. Not only is this the first film released by Studio Ghibli in six long years, they're returning with another of Diana Wynne Jones' works, author of the incredible Howl’s Moving Castle. But it is also, slightly worryingly, the studio’s first full length CGI feature. With the film in the hands of Goro Miyazaki (fresh from the CG series Ronja the Robbers Daughter), this is sure to be that glorious hit of Ghibli magic we’ve all been Jonesing for….right?

Earwig or Erica Wig, as she is swiftly renamed, is abandoned on the steps of an English orphanage as a baby. However, rather than being one of those dismal institutions that we tend to see in films, this one is full of laughter, fun and apparently the best shepherds pie ever (it does look rather good). It’s so great in fact that Earwig has rather dedicated herself to making sure she’s never adopted so that she can live there forever. Her plans are thrown into chaos however when she finds herself adopted by a rather aloof woman who turns out to be a witch looking for an assistant. Earwig promptly decides that she needs to escape as quickly as possible. I mean ask the witch to teach her magic. I mean learn about the witches former bandmate who is also Earwig's mother. I mean…

It seems prudent to preface the following by noting that Tales from Earthsea wasn’t actually all that bad, and that even if it was, Goro Miyazaki more than redeemed himself with the brilliant From up on Poppy Hill. It’s important to say this to remind people that he’s a good director who knows what he’s doing. It’s important to say this because Earwig and the Witch is possibly the worst film Ghibli has ever made.

The main issue with the film is Earwig herself, who is without a doubt one of the most hateful, annoying brats ever put on film. All she does throughout the film is whine about anything and everything and then basically bully all those around her. She has no character arc whatsoever, so you spend the whole film safe in the knowledge that her big comeuppance, that will show her the error of her ways, is on the horizon only for it to never come. The moral of her story appears to be that if you’re a lazy, unpleasant sod (if you’ve seen the film you may wish to use some other words to describe her...) then you’ll get your way eventually. She could be a character on Little Britain she’s so horrible!

Sadly, the story is also just a mess. Nothing really happens throughout the run of the film and nothing is resolved by the end in any real way. Not in a ‘this’ll be in the sequel’ way either, it feels more like the film was made by throwing random ideas  into the script. It all seems to be put together in the hope that aiming the film at a younger audience than is typical for Ghibli, that no-one would notice the vast, gaping chasms of plot and structure because they’d be too busy looking at all the pretty colours. It’s pretty sad really as the opening of the film is fantastic, with a neat motorcycle chase and a big Lupin III homage. I haven’t read the original story so I can’t definitively state if these issues are of the film's making or from the source material, but at the end of the day it’s the job of the studio to make the material work when translating it to film.

There are a few highlights worthy of note – the animation is actually pretty nice once you get used to it. It reminds me of the CG segments used in Show By Rock and it looks and feels a lot like it was made in stop motion. Looked at through this lens a lot of the design decisions, such as having Earwig’s hair act like a solid object, or the facial animations seeming to jump from expression to expression with no in-between frames, make more sense. It also has to be said that some of the food shown is so spectacularly done that you half wonder if they used photos. Seriously there's a portion of fish and chips in there that’ll make your mouth water!

On top of this the soundtrack is fantastic throughout and the main song of the film is a really catchy and unexpected rock number. Satoshi Takabe is clearly going to be the go-to composer for Goro Miyazki’s works at this point and you certainly won’t be disappointed if that’s the case!

Realistically we do accept that this film is not aimed at adults. In fact it’s probably not intended for anyone with an age in double digits! That being said I'm unsure why you’d want to let impressionable young minds see this, if only on the basis that it might suggest that it’s OK for them to act like the main character. The best thing we can say is that you can happily give it a miss. The cinemas aren’t exactly going out of their way to advertise it either so you might not even have to make that choice!

3
A great soundtrack won't save Ghibli's worst film to date.