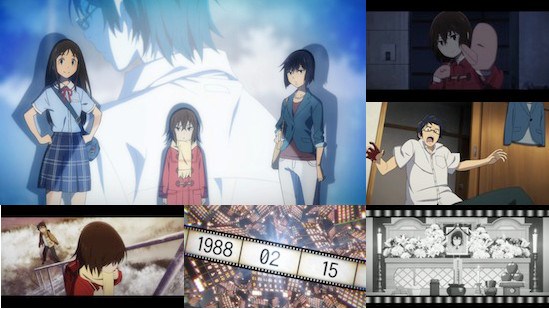 “Revival” – an ability that allows 29-year-old Satoru Fujinama to travel back in time to moments before a fatal accident is about to happen in his vicinity. Despite possessing such a power, Satoru chooses not to draw attention to it – saving lives whenever needed and quietly going about his daily life as a manga artist and part-time pizza delivery man.

But when a memory from Satoru’s childhood resurfaces and leads to the murder of his mother, a wrongly suspected Satoru finds himself transported back to the body of his ten year old self in 1988. Armed with an adult mind and knowledge of future events, Satoru is locked in a race against time to prevent the abduction and murder of classmate Kayo Hinazuki. By fixing the past Satoru can also fix the future, but can he manage to do it in time?

Within a few weeks of its premiere back at the beginning of last year ERASED quickly made a name for itself as one of the must-watch shows of the season, eventually staking a strong claim to be one of 2016’s best. Right from the first episode it isn’t hard to see why – audiences are greeted with an instantly likeable protagonist and an interesting gimmick, it doesn’t take long for the show to launch into a time-spanning murder mystery where the viewer is left just as in the dark in regards to the culprit as Satoru. There’s enough here to start getting suspicious, but as far as actual evidence goes the case is still far from solved by the end of this first half. So, with the answers still to come these episodes are far more immersive in their approach – soaking up the atmosphere and desperation of Satoru’s situation as time begins to run out. This is also reflected in the show’s pacing, reintegration into Satoru’s past quickly becomes more frantic, with the atmosphere turning more and more sinister as time goes on. While it’s difficult to discuss ERASED without giving too much of the plot away, suffice to say when Satoru returns to the present things haven’t quite gone according to plan – at which point the story continues in the aftermath of this different (yet related) murder case instead. The delivery of these two intertwined time periods is crafted impeccably, and it isn’t long before you find yourself glued to the screen and eager to find out what happens next.

The jumps between the present and 1988 are extremely well-handled, offering plenty of different framing techniques to keep the show unique among even the slew of time travel fiction. Despite having the body of a ten year old Satoru is wise beyond his years, and the juxtaposition of his outer child voice compared to his inner adult voice does a great job of capturing this. The two even chip in together at times, not only to add emphasis to key lines/information but also in an attempt to inject some (often much needed) comedy into the mix. Even little touches such as changing the aspect ratio for the sections in 1988 make a difference, creating the air of a flashback sequence even though the footage is all-new to the viewer. The point is further hammered home by the occasional appearance of film-strip borders, playing up Satoru’s desperate notion that his actions might actually be changing the past in any significant way – and that instead he’s just playing out the same film, despite some minor differences.

In spite of the sci-fi trickery which the show’s premise hinges on, ERASED is a series that tackles some very real issues – to the point where at times it can be a rather uncomfortable watch. Between abduction, murder, arson and on-screen child abuse ERASED isn’t short of hard-hitting topics to play on the viewers emotions. While Kayo’s murder is a pivotal plot point, the show is careful to not just simply treat Kayo as a plot device. Her story is core, and without Kayo truly feeling like a character ERASED would lack the emotional weight that helps make it so engaging. Its strengths also rely on the other cast members, with Satoru only really beginning to make headway with his mission as he begins to rely on those around him. He may be the one with the knowledge and the power, but as a child he’s still pretty limited in what he’s capable of. From the adult guidance of his mother back in 1988 to the trust of co-worker Airi in the present, Satoru’s success weighs just as much on those around him.

The only thing perhaps letting this release down is its price. Featuring only six episodes in total the set (particularly the blu-ray edition) is pretty bitter pill to swallow, and feels reminiscent of the days anime fans were expected to pay a premium for volume upon volume that only contained three or four episodes. Thankfully ERASED is only 12 episodes long so things won’t get too expensive, but it’s still going to put a larger than usual dent in your bank balance. This is unfortunate, but sadly these things sometimes happen, and by the sounds of it the release format was a decision taken completely out of Anime Limited’s hands by the licensor. Of course the high quality English dub, audio commentaries and (in the case of the collector’s edition) art book are all there to help alleviate this. At the very least one can’t deny Anime Limited have done their best to ensure the quality of the release matches the high quality of the show itself.

Though the price may turn you off, rest assured that ERASED is a series that’s definitely worth your money. Thrilling, mysterious and most of all extremely hard-hitting, ERASED engages you from its very beginning – pulling you in with an intriguing gimmick before gripping on tightly with its engaging mystery and wonderful characters. With these six episodes ending in the most excruciating of places, the second volume can’t come soon enough.

9
A series you won’t want to erase your memories of any time soon.