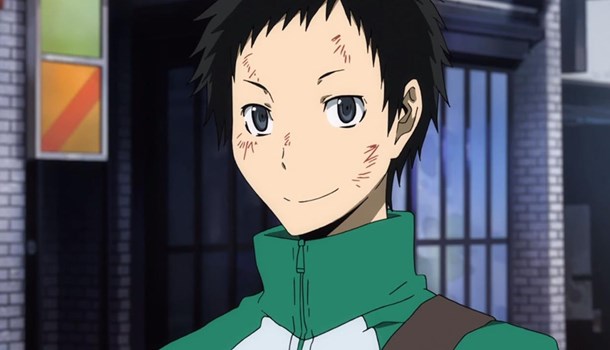 Durarara!! x2 Shou left us with a hell of a cliffhanger: Izaya Orihara - the nefarious information broker - was stabbed and left for dead on the streets of Ikebukuro. As Durarara!! x2 Ten kicks off we learn his fate, and much to the disappointment of many Ikebukuro residents, he is still alive and kicking. Though perhaps not for much longer, as Izaya lies in his hospital bed pondering which of his many enemies might be coming to finish him off. Eventually, one night, he hears footsteps... Could it be Jinnai Yodogiri come to finish the job, or perhaps one of his old enemies, or maybe even someone new?

From there - well - the story branches out in a multitude of directions. Make no mistake, this set is a difficult one to follow - even by Durarara!! standards. Mikado continues to fall down the rabbit hole he entered in the previous collection. This sees his character taking on a darker, more melancholy edge. He even seemingly tips into the unhinged at points - occasionally sporting a wistful smile which hints at his deeper troubles. While Mikado could have been described as the main character for much of the prior series’ events, here he takes something of a back seat, as the ensemble cast swells and events spiral out of his control.

Elsewhere in Ikebukuro Celty is still being hassled by ‘the man’, with the traffic cops hot on her heels at every turn. Idol Ruri Hijiribe is having some stalker trouble, which somehow manages to entangle the likes of Shizuo Heiwajima and even Anri Sonohara. Meanwhile Russian assassin Varona - still reeling from her defeat by Shizuo - finds herself working at Russia Sushi with Simon, and before long gets closer to her new nemesis than she ever expected. The Awakusu Yakuza clan are having a spot of bother with some young upstarts selling drugs on their turf, not only that but a seemingly separate group is running illegal gambling rings on their territory. Mika Harima - Seiji Yagiri's stalker come girlfriend - finally faces off against her love rival, the incestuous and psychotic Namie Yagiri. This culminates in one of the stand out moments of the series, as Mika’s true character and agency come to the fore for the first time. Another stand out moment is when Izaya begins to unravel a plot he seeded back in high school, it manages to land a classic Durarara!! blow at the end of a tangled web of confusion, which pulls in characters from all over the series chronology. Phew *breathes*… And that, dear reader, is only a glimpse of the complexity which awaits within this series.

Therein lies the main problem with Durarara!! x2 Ten: While the original series skirted the fine line between complexity and comprehensibility Durarara!! x2 Ten drops on the wrong side of that line more than once. At times there is too much going on, involving too many characters, and too many seemingly distinct - but ultimately intertwined - events. Even if you can remember that one character who popped up all those episodes ago, you will do well to remember much more than a face, or even a name. This is amplified by the continued reliance on the chat room as a means of communicating plot-vital information. What was a unique and enjoyable mechanic with the initial cast list becomes increasingly unwieldy and difficult to follow, with each new addition to the roster of usernames weighing it down further.

The soundtrack remains as fantastic as it always has been, with the opening and ending sequences being just as likely to worm their way into your ears as their earlier counterparts. If we were to nitpick then perhaps the animation isn’t quite up to the standards it once was, with one or two scenes feeling somewhat rougher around the edges than their forebears. Though the series’ realisation of an Ikebukuro infused with supernatural goings on still feels spot on. However, one thing to watch out for with this release (at least with the review copy we received) is that the subtitles default to off when selecting the English soundtrack, so you will need to actively turn on those all important sign subtitles.

The excellent direction and confidence in its characters we’ve commented on previously are still apparent in Durarara!! x2 Ten, but they are perhaps strained a little too far here. For all but the most diligent of viewers this series could prove to be a confusing viewing experience. Durarara!! was always a series which rewarded repeat viewings, but with Durarara!! x2 Ten it becomes an almost essential part of the viewing experience. That will put many people off, but it is a testament to the series’ wonderful array of stories and characters that it still a thoroughly enjoyable watch despite all that complexity. All the excellent comedy, drama, and supernatural goings on which have become the series’ trademarks are still present in spades here.

It is when it comes to scoring the series out of ten, as we tend to do here at UK Anime Network, that I hit a real difficulty. Having given the original series a 9, and Durarara!! x2 Shou an 8, I really have to give Durarara!! x2 Ten a 7 - as it simply isn’t as good as those two series, for the reasons already outlined. This is, of course, a limitation of the age old numerical score system for reviews. So, let it be known that Durarara!! x2 Ten is by far and away the best 7 we’ve ever given!

7
Wonderfully complex and confident, but laking some of the series’ earlier coherence.
LATEST REVIEWS