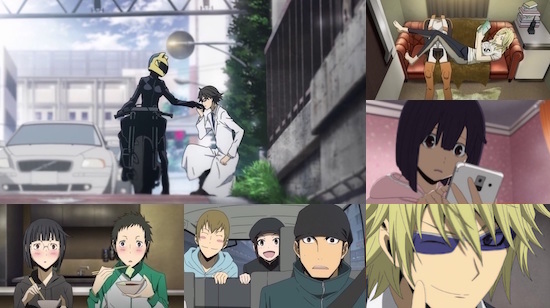 I imagine if you are here reading this that you already know and love Durarara!! If not, what are you waiting for? Go and watch it immediately! Trust me you will need to have seen it and enjoyed it to get anything out of this second series. Go on. Off you go, I’ll still be here when you are finished! Ready? Okay, let’s begin...

Here at UK Anime we are big fans of the first series and lavished Anime Limited’s Blu-ray release with no small amount of praise (well, once they’d fixed the technical issues). So we were all looking forward to more of the same complex and multifaceted brilliance that first series provided, and that is almost exactly what is delivered, up to a point.

Durarara!! x2 Shou sees new studio Shuka taking over the reigns from Brain's Base. Brain's Base have an impeccable record for adapting author Ryōgo Narita’s works, including the excellent Baccano! - though don’t worry, the series is still in good hands. Most of the production staff, including director Takahiro Omori, remain the same as the first series produced under the Brain's Base banner. This enables a very similar approach to this second series, so similar in fact that you would be hard-pressed to notice the change in studios outside of the show’s credits. So, thankfully, we once again have a competent and proven team working on Durarara, arguably one of the most complex and difficult to direct series around.

It is six months since the events of the first series and everything has finally settled down in Ikebukuro. Or has it? Poor Celty finds her fame spiralling out of control and with it comes a renewed interest in her capture, both from the police and from other less scrupulous types looking to cash in on a sizeable reward. Shizuo finds trouble every which way he turns, from Biker Gangs and Yakuza to little girls and Russian hitmen, everyone seems to be out to get him - a fact long time rival Izaya revels in, but is he the one to blame for all this? Shizuo certainly thinks so. Meanwhile the staff at Russia Sushi suddenly find themselves with an influx of old comrades, who seem to cause havoc wherever they go and manage to keep the likes of underground Doctor Shinra Kishitani extremely busy. Away from Ikebukuro, Masaomi is still on the road with Saki, though he tries to keep track of events back home. At least Mikado and Anri look to have settled back into a normal school life; that is until the new characters start stirring things up...

These new characters all make a big impact at some point in proceedings, and the biggest early splash comes in the form of Kururi and Mairu Orihara, Izaya’s twin sisters, who you might remember from the first season’s OVA. They manage to steal many of the scenes they are in and are seemingly kinder and friendlier than their big brother, although we soon learn that it is equally as unwise to mess with them as it is to challenge Izaya. Another new arrival at school is Aoba Kuronuma, who seems like a nice guy and almost immediately attaches himself to his new friends Mikado and Anri. However, as with almost everyone else in Durarara there is a lot more to him than first meets the eye. Next up we have “ladies man” Rokujo Chikage, the leader of the notorious biker gang Toramaru. He is not a man to be trifled with, but will always help out a lady in trouble. On the younger end of the scale is Akane Awakusu, a middle school girl whose family ties put her in the centre of events for many of the series' later episodes. By far the biggest set of new characters come in the form of gangsters, specifically the Yakuza and Russian Mafia. We have met some of the Yakuza before, but here we are introduced to many more, though arguably the most interesting of the new additions come in the form of Varona and Sloan, two Russian assassins who manage to wade headfirst into many of the series highlights and other shenanigans. Finally, there is a mysterious serial killer on the loose known as “Hollywood” due to their habit of always wearing some form of classic horror movie costume.

With all these new additions you might think that you would struggle to stay on top of events, but not so. That the series manages to stay coherent is a testament to the excellent direction of Takahiro Omori, although make no mistake this series, even more so than the original, is a show that requires your full and complete attention. Speaking of which: nods to the prior series are frequent and often subtle, so a refresher on that series is probably a good idea before diving into this one. Durarara!! x2 Shou builds slowly, showing a confidence in its characters to keep your attention while it methodically begins placing the foundations of it’s meandering and complex story. This confidence is not misplaced either - I could wallow in the day to day antics of Celty and company for an entire series and still come away happy, but as with it’s predecessor there is something much deeper and darker at the heart of this series.

This brings me to my only real complaint about the release, because it only contains the first twelve episodes of a 36 episode and three OVA story arc (the latter of which is missing from this UK release) the plot remains unfinished. Thus a multitude of story threads are left high up in the air when the final episode’s credits roll. Similarly the slow start means that the series has only just hit its full stride by the time it ends, but what an ending it is: there is a cliffhanger in the final episode that will leave you desperate for more. This series then is akin to an excellent starter in a three course meal. No matter how good it is it simply cannot satisfy completely without the main course and dessert, but it does do a wonderful job of whetting your appetite for the delicacies to come.

Finally, on a technical level, we had a slight issue with the second disc in our (Panasonic) Blu-ray player. So, yet again the curse of Durarara physical releases strikes, though thankfully to a much lesser extent this time. The second Blu-ray disc (though interestingly not the first) defaults to full subtitles with the English dub, meaning we had to manually either switch over to Japanese audio or to sign only subtitles. A minor annoyance, but something we could definitely do without on a pricey Collector’s Edition.

English and Japanese audio with English subtitles and English sign subtitles. Comes packaged in a rigid case with a digpack, a 36-page booklet, 6 postcards and a set of stickers. Clean opening and ending sequences are included on-disc.

8
A fantastic starter for Durarara x2 that will leave you hankering for the main course.
COMMENT AND DISCUSS
blog comments powered by Disqus