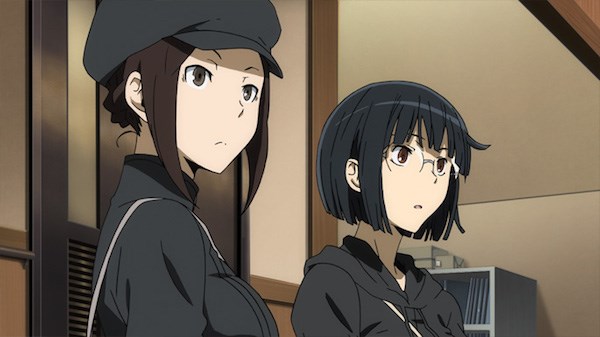 We’ve always been fans of Durarara!! here at UK Anime Towers, but after a promising start to series two - with Durarara!! x2 Shou - Durarara!! x2 Ten upped the cast list and the complexity, leaving some viewers at the risk of being overloaded to the point of confusion. So, with Durarara!! x2 Ketsu rounding off the second series, how well does it wrap up the multitude of loose threads it has created?

Durarara!! x2 Ten dropped a number of revelations on the viewer before its end, not least of which were the hit and run which left Kyohei fighting for life, the arrest of Shizuo, and the true identity of Jinnai Yodogiri. All these threads and more are picked up early on in Durarara!! x2 Ketsu, with something of a powwow taking place at Shinra and Celty’s flat. The ragtag bunch gathered there decide to form a ‘Guild’, at Walker’s suggestion, with the aim of getting to the bottom of some of the strange goings on in Ikebukuro.

By the end of Durarara!! x2 Ten you might have been forgiven for asking how much more tangled this series’ webs could get, but here Durarara!! x2 Ketsu pushes even further. With the sudden reappearance of Celty’s head, the emergence of another Saika, and an impending gang war, to name but a few strands we find ourselves wrapped up in. For better or worse the main three characters of the original series - Anri, Masaomi and Mikado - continue to take a back seat for much of this series, only coming for the fore as it draws to a close. This means the likes of Celty, Shizuo and Izaya get more of the limelight. Even some who might have been considered as background characters up until this point, such as Erika, Kasane Kujiragi and Chikage Rokujo, have the spotlight shined on them.

What this set does provide is some incredible stand out moments in terms of comedy action and drama, such as Shizuo’s encounter with Shooter (Celty’s horse). Naturally many of the more dramatic moments come towards the end of the series, as plans come to fruition, old enemies face off and Mikado finally reaches his lowest ebb. Verona continues to be by far the most interesting of the newer characters, though many of the newbies, especially Kasane Kujiragi, do prove to be pivotal in many of the series machinations.

Viewers who struggled to follow the events of the last set will find themselves drowning in an information overload with Durarara!! x2 Ketsu. However, those that kept up with the pace will find an awful lot to love here. Almost everything you could wish to be concluded is tied up with a neat bow and gifted to the viewer during this series’ runtime. While not everything is perfect - Celty’s arc in particular isn’t as satisfying as it could have been, suffering from an uncharacteristically predictable conclusion - there is a great deal to please long-time Durarara!! fans.

Ultimately you should already know whether or not you are a Durarara!! fan, if you don’t know then this is certainly not the place to start. Such a complex and multifaceted series needs to be viewed from the beginning. Fans of the series should be happy with the conclusion of Durarara!! x2, as for the most part it does the rest of the series justice. Similarly Anime Limited’s presentation of the series is as good as ever. And really that’s all you need to know…

English and Japanese audio with English subtitles and English sign subtitles. Comes packaged in a rigid case with a digipack, a 20-page booklet and 6 art cards. Clean opening and ending sequences are included on-disc.