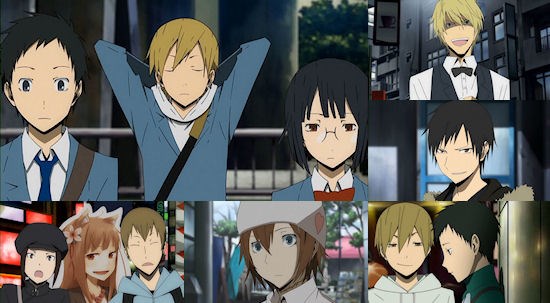 It isn't very often we get to thumb our noses at North American anime fans on account of getting an anime release before they do, but Durarara has proven to be just such a release so I suppose we should make the most of getting our hands on this series as it makes the leap from streaming service Crunchyroll to DVD in the UK faster than our US counterparts.  Although that means that this initial UK release appears without an English dub, there's still plenty to salivate over as this first volume of the series from Beez Entertainment brings us the show's first nine episodes across two discs.

After a set of opening credits that runs through the show's dazzling array of characters (sadly without any English subtitles to reveal their names, which makes life trickier), the first episode of the series wastes no time in introducing us more thoroughly to some of those individuals through the eyes of Mikado Ryuugamine, a young boy who has never left his quiet home town before but now finds himself entering the bustling district of Ikebukuro.  His tour of the area comes courtesy of childhood friend Masaomi Kida, who takes Mikado (and by extension, the viewer) through this occasionally weird and wonderful new environment, including its gang culture and the urban legend of a supposed "headless rider" who drives around the city by motorbike, thus setting the scene for the episodes to come.

From this point onwards, Durarara makes the most of that hefty character roster, using each instalment to tell a particular story via a different narrator and their perspective on both Ikebukuro and their own individual circumstances.  This brings out a unique feel to each episode to the point where they could almost be packaged as stand-alone stories, but don't be fooled - each and every instalment is carefully intertwined with the show's major plot points, and as we progress through the series certain aspects of the story come to the fore.  More specifically, that aforementioned headless rider becomes the centrepiece of many of the weirder events going on within Ikebukuro, as said rider Selty's missing head proves to be the pivot around which many of these early episodes revolve in some shape or form.

Regardless of that growing focus as this first volume moves forward, these early episodes of Durarara serve up a heady mixture of comedy, action, mystery and intrigue via numerous fantastic set pieces that squeeze every ounce of entertainment out of both plot and character.  On the one hand, the series so far manages to somehow blend the surreal and outright ridiculous into its setting, while on the other it still feels sufficiently grounded in reality to remain compelling, fascinating and even believable as it parades everything from the near-invincible and ultra-strong Shizuo through to the headless Selty before you.  That fact alone is an impressive feat, but when it does so via story-telling such as that portrayed in episode six which could easily be slotted into a movie like Lock, Stock and Two Smoking Barrels you can't help but fall in love with it and what it's trying to achieve.

For all its various wonders as a series, we do however have to pick a few technical holes in this opening volume of Beez Entertainment's release.  Perhaps most notable amongst the issues is the way subtitles are displayed when more than one character is talking at a time - in short, you'll never see more than one line of dialogue displayed at one time, meaning that certain lines are flashed up for a split second before the next is shown on-screen, making it both difficult to follow the conversation and tricky to fathom who is saying what; quite a problem for a subtitle-only release.  Equally irritating is the state of the background audio throughout this volume, where the sound of crowds and anything going on behind the main dialogue and music is so horribly garbled, mangled and compressed that it actually becomes intensely annoying.  Finally, the decision to use PAL speed-up to transfer the original video from NTSC for this UK release is understandable in terms of picture quality, but as a result everything is sped up by 4% - this both sounds and feels off-kilter in the show's opening and ending credits, but also gives a surreal feeling to certain scenes within the show itself, and personally this reviewer found it pretty off-putting on occasion.  As one last note, this release also uses Japanese rather than English name order for its subtitles, leaving Masaomi Kida as Kida Masaomi for example - I have no huge issue with this, but it's the kind of thing you'll either love or hate.

Even that list of issues with this DVD release doesn't cover up the fact that Durarara's first volume showcases the beginnings of a fantastic series - it knows just how to mix-up its comedy, action and character development for maximum effect, and it backs up that nous with a deep and carefully inter-woven set of stories that are almost certain to grip you and keep your interest throughout each of the nine episodes on show here.  It's genuinely a shame that this volume of Durarara doesn't live up to the show's streaming presentation online at its core, but if you want a physical release that will entertain you long after said online presence has disappeared, the series itself still makes for an anime well worth a place in your collection.

Japanese audio, English and German subtitles.  Extras consist of textless opening and ending credits, and a handful of trailers for other Beez Entertainment series.