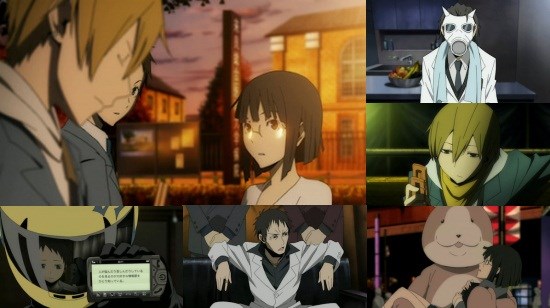 When we reached the end of the first half of Durarara a few months ago, it was difficult to assuage our outpouring of love for a series that managed to weave a huge cast of characters and conflicting storylines into such a compelling viewing experience which fitted perfectly within the bustling Ikebukuro settings which it uses.

With a line largely drawn under the events of those episodes, the second half of Durarara moves us forward six months into the future, where everything seems to have settled down from the previous chaos surrounding the now not so mysterious headless rider and a brief uprising of the Dollars.  Of course, any such peace and tranquillity doesn't last for long, and our focus is soon to drawn to a series of incidents where people are being attacked, seemingly at random, by an individual known as "The Slasher".

As incidents involving The Slasher intensify, so Mikado's Dollars are drawn back into the centre of Ikebukuro's goings-on, as are rival gang the Yellow Scarves, whose own leader also wants to see a stop put to these incidents at any cost.  These three rival factions and the escalating rivalry between them intensifies and snowballs as the second half of the series progresses, playing right into the hands of Izaya, who seems to have had the whole thing planned out from the start, using his knowledge and contacts to ensure that the tension surrounding the three individuals at the eye of this storm reaches unbearable limits.

As with the first half of the show, Durarara also has plenty of other goings-on running alongside this major story arc, with a number of sub-plots which almost all dovetail in neatly with the mainstay of the plot.  These side stories are a little less frequent in these later episodes however, and oddly enough this more focused approach actually threatens to detract from what Durarara does best, as it spends so much time concentrating on the main trio of characters that are embroiled in current affairs that some of the more interesting side characters only play bit parts or are suddenly left out of proceedings entirely.  This sense that something is missing unfortunately manifests itself most strongly at the very end of the series, where little is resolved and some plot points seem to have been forgotten entirely - The risk of having such a large cast of characters perhaps, but either way it makes for a disappointing finale.

Despite that weak ending, there's still a whole lot to love about Durarara - Even when it isn't quite on tip-top form, it produces some breath-taking sequences that are full of imagination and bring its colourful world to life perfectly, while the characters that do enjoy the spotlight all grow, mature and face their demons in a believable and suitably entertaining fashion.  The show's playful nature still remains strong even when there is serious business at hand, continuing to throw in random anime culture references and other such bizarre moments to lighten the mood and keep the series moving at a suitable pace.

In a sense, this second half of Durarara is a victim of its own previous success - How could it possibly improve on those fantastic opening dozen episodes?  The answer is that it can't, and this burden stops the show from becoming an outright classic as it fails to live up to our hefty expectations.  However, with a huge amount of headroom for a second season and a polished, entertaining story arc to round off the series no matter how it ends, Durarara remains arguably the best anime series to come out of Japan during the course of 2010 so far.

8
The second half of this series never reaches the dizzy heights of the first, but it still remains hugely entertaining and well worthy of any viewer's time.
LATEST REVIEWS