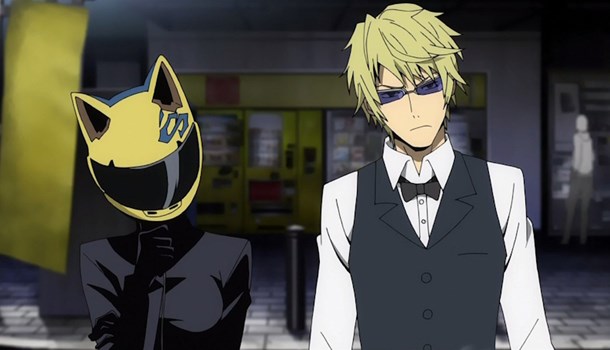 After living in a quiet town where nothing happens, being thrust into the middle of Tokyo's heaving Ikebukuro district is always going to be something of a culture shock, and so it proves for fifteen year-old Mikado Ryugamine as he moves to Ikebukuro to start a new school alongside old friend Masaomi Kida.  Thus begins the tangled web of inter-relating characters that is Durarara, Brains Base's light novel adaptation currently running on streaming anime web site Crunchyroll.

To be quite frank it's rather difficult to know where to begin when it comes to discussing this series, so wide-ranging is its cornucopia of colourful individuals and the various storylines that run through it.  At the centre of everything however is a headless motorcyclist who has already become the stuff of urban legends around the district, and as the first half of Durarara progresses it's this particular plot point which becomes the fulcrum around which everything else turns and moves.

Cool though this major storyline may be, that shouldn't allow you to be distracted from the complexities of the various other characters on show here, from the aforementioned Mikado (who has more to him than originally meets the eye) through to the ridiculously strong (and not to mention angry) Shizuo.  Luckily, most of the early episodes on show here delight in focusing on a particular character, telling a story through their own eyes and narration while ensuring that the broader plot points also get any coverage that they need to keep the series as a whole moving.

Usually, focusing on different characters or points of view on an episode by episode basis would make for a hit-and-miss affair, but somehow Durarara manages to ooze quality throughout despite taking very different approaches to each instalment.  While one episode can take you on a journey alongside a troubled teenager with major family problems, the next throws you with gay abandon onto a rollercoaster of criminal gangs in an episode that could give Guy Ritchie's early work a run for its money in terms of gritty comedy.  It might sound clichéd, but there really is something for everyone here - You have romance, you have action, you have intrigue, you have some fantastic laugh out loud moments, you have random references to other recent anime and manga series (which might leave you rather bemused if you don't know what "Biribiri" refers to for example), and... well, you probably have a metric tonne of other stuff that I've forgotten to mention here, so wide-ranging is the brush with which this show paints its world.

Somehow, Durarara throws all of this into one big melting pot and, rather than coming out with a mess, they leave us with a delicious and nutritious effort that tastes so sweet it should be criminal.  Each individual episode is so perfectly crafted that it's worthy of recommendation in its own right even if the show's main story wasn't up to much, but incredibly even this central storyline is so compelling and full of grin-inducing twists and turns that it acts as a massive cherry on top for what is already a hugely entertaining show.

When all is said and done Durarara defies explanation in words alone, as it's simply far too rich an environment to bring to life with some brief synopsis and commentary, particularly given the devastatingly effective and breath-taking way in which Ikebukuro has been animated by Brain's Base.  With that in mind, my advice is simply this - Sit down, find yourself some free time, take a deep breath and start watching Durarara.  I guarantee that you won't regret it.

At the time of writing, Durarara!! can be viewed in streaming format from Crunchyroll - The first twelve episodes are currently available to be viewed on the site.

9
Both visually and in terms of story and characterisation, Durarara excels to create what is a must-watch series so far.
LATEST REVIEWS