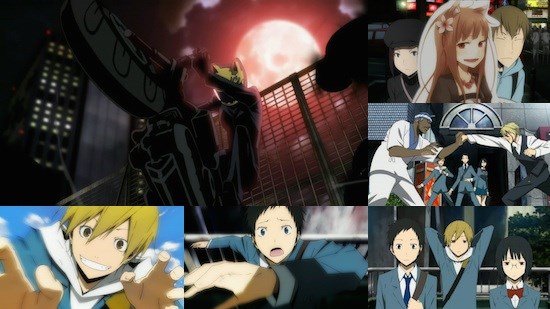 The following review was originally published on 24th March 2014 to coincide with Anime Limited's Collector's Edition Blu-ray release. Since this initial review, the release has been fully reauthored to resolve the issues we originally outlined - skip to the end of the article for our updated thoughts having examined these reauthored discs.

You may have noticed, if you’ve been reading our reviews for a while or frequent the forums, that we have a lot of love for Durarara here at UK Anime. When we’ve reviewed any part of the series in the past, either in physical or streaming form, it has never scored lower than an 8. Even then, most of our criticism has been with technical issues rather than the series itself, and this pattern looks set to continue with Anime Limited’s Limited Edition Blu-Ray set.

If you’ve not yet had the pleasure of watching this series in action then you’ve been missing out; Durarara seamlessly and deftly weaves a complex web of plot-lines and characters that could so easily fall apart or lose itself with lesser writing or direction. The character roster alone is enough to make even Capcom’s most padded out Super ULTRA Vs Turbo Street Fighter character selection screen seem tiny by comparison. You’re introduced to most of the characters straight away via the opening credits (which are backed by the catchy little ear worm Uragiri no Yūyake by Theatre Brook), but many of these characters take a little while to show up in the series. This is because the series isn’t your typical linear telling of events, but rather each episode provides a particular view of said events - sometimes an episode will retrace familiar ground (or seemingly familiar ground) from a slightly different perspective, sometimes new plot points will be introduced or old ones tied up and so on.

The very first episode introduces us to Mikado Ryūgamine (whose ‘literary' sounding name is the butt of many of the series early jokes), who is perhaps the nearest thing to a main character you will find in the world of Durarara. Mikado is a country boy who has come to Tokyo to attend a school in Ikebukuro, the very same school his childhood friend Masaomi Kida attends. That’s about as normal as the series gets; from there we’re inundated with action, comedy, drama, mafioso, street gangs, supernatural beings and more. There’s Izaya Orihara the “Information Broker”, Shizuo Heiwajima the super strong bartender (well he’s dressed like one at least...) with serious anger management issues, Celty the transporter and mysterious “Headless Rider”, the dangerous and infamous slasher, Simon the Russian Sushi vendor, Anri Sonohara the “eroti-cute” classmate of Mikado and Kida-kun, the street gangs, the perverted school teacher... and so the list goes on.

There’s so much going on in Durarara that it really shouldn’t work, but it doesn’t just work it really shines through all of that complexity. That it holds together so well, despite (or perhaps because of) all that’s going on should come as no surprise when you consider the pedigree behind this series. Talent oozes from the series’ creators, from studio Brain's Base (Spice and Wolf II, Princess Jellyfish, Penguindrum) and directer Takahiro Omori (Baccano, Natsume's Book of Friends) all the way through to the writer of the light novel on which the series is based, Ryohgo Narita (also Baccano). Through all the complexity it’s the little details that really make Durarara stand out, and it’s these details that you really need to keep an eye out for. Things that seem at first like incidental details can ultimately have a big impact, such as usernames in a chatroom, or the fact that all of the background characters are presented in greyscale. You’ll also find a myriad of references to other series in Durarara like the cameo appearance of Isaac and Miria from Baccano or a Spice & Wolf cardboard cutout.

Durarara was always a beautiful series to look at, and that’s all the more evident now it’s finally made the transition to Blu-Ray here in the UK. This Limited Edition box set looks very nice indeed, and Anime Limited have obviously put a great deal of effort into packaging up this series for the UK market. They’re building quite the reputation for their packaging and artwork, so much so that I’ve even heard a few jealous murmurings from the other side of the pond over the quality of some of their releases. That said, it seems Durarara releases in the UK are doomed to forever be undermined by technical issues. The Beez Entertainment DVDs from a couple of years ago were riddled with technical problems and this new release suffers from some different, but not dissimilar, issues.

Durarara, much like Baccano before it, has a very good english dub. Unfortunately, what it doesn’t have is any from of subtitles for on-screen text or foreign language translations. A lack of subtitles for on-screen text when watching an English dub is a common problem in anime and it’s often the cause of annoyance to fans, but it’s rarely a deal breaker. Here, however, it’s absolutely catastrophic for your enjoyment and understanding of the series - this is because one of the series main characters (Celty Sturluson) communicates almost exclusively via text on her mobile phone, and while some of this is read out loud in the audio a lot of content is missing due to the lack of subtitles. Similarly, another character (Simon Brezhnev) speaks in Russian occasionally, but this isn’t translated into English either in the audio or via subtitles. This is made all the more infuriating by the fact that the original Japanese text for these sequences is left in place, so you know that you’re supposed to understand what’s being said but you can’t unless you can either speak Russian or read Japanese. Durarara is such a complex and multifaceted series that missing details like these can seriously damage your understanding and enjoyment of the series. Even seemingly small things like the names of the users in the chatroom, which features regularly throughout the series, can make the world of difference. This is especially true when those names are dropped verbally elsewhere in the series - for example what should be a dramatic one-liner about half-way through the show simply falls flat if you don’t know those usernames.

The solution to all this is, of course, to watch the series in Japanese with the full English subtitles, which thankfully also include all of the translations for on-screen text. However, even here we encounter issues - for example, parts of Celty’s communications remain untranslated (though not many to be fair), as does the entirety of the post credits section for episode 12.5. The subtitles also make some rather distracting choices for presenting character names, e.g. you’ll hear “Kida-kun” but what you see on-screen is “Masaomi”. What to do with Japanese naming conventions is of course a common problem in anime but it seems particularly pronounced here, possibly due to the extra concentration required to follow a series of this complexity.

There’s one other, smaller, annoyance which effects the release: every DVD or Blu-Ray player I’ve ever owned have had the ability to resume discs where you left them, unless explicitly prohibited by the disc. With this release, much like the previous Beez Entertainment DVD release, you can’t do this (or at least not on our Panasonic player) - you’re simply and unceremoniously dumped back to the Anime Limited logo every time you try to resume playback. So, you’d better remember which episode you were watching last night, because your player won’t be able to handle it for you this time. This also has the side effect that any settings for subtitles and audio tracks return to the default settings each time, although thankfully (given the issues mentioned above) the default is Japanese with English subtitles.

These technical issues really are a shame because for all the excellent work Anime Limited have put into this release it is really let down by Siren Visual’s masters, which is something largely out of Anime Limited’s control. If only Siren Visual had put in as much effort into mastering the Blu-Rays as Anime Limited have clearly put into everything else then this set would be an absolute must have - as things stand Anime Limited have proven that you can in-fact polish a turd, but should you buy it? A lot of the problems are things that wouldn't matter too much with another series, but Durarara!! is a tangled web at the best of times and these are things that really do matter in this case.

Our advice would be this: If you’re happy with Japanese audio and English subtitles then I have no hesitation in recommending that you buy this set. However, if you’re someone who watches anime with English audio it’s considerably more difficult to recommend.

Durarara!! Redux (13/05/2015)
Anime Limited have taken their Durarara!! release back to the drawing board and remastered all the discs. These new masters add the previously missing sign subtitles for the English dub. This includes much of the seemingly incidental text we noted as missing in our original review, such as the usernames in the chatroom and some of the translations for Celty’s conversations via her phone. The opening and closing songs are also now translated, along with the character names in the opening animation. These new masters default to the English dub, with sign subtitles, as oppose to the default Japanese audio of the original masters. Simon’s Russian is also now translated in full.
Someone has clearly listened to our complaints about the previous masters and spent a great deal of time scouring the series to check precisely what needs translating and what doesn’t. Where text is read out in the dub or is just background text it isn’t subtitled, but everything else is translated. With this in mind we can now rescind our previous warnings about the English dub and recommend Durarara!! regardless of your dub preferences.
The re-mastered discs for the deluxe set should start arriving on people’s doorsteps as part of Anime Limited’s replacement program sometime in the near future. The standard edition includes the fixes from the off and will be available from 18th May 2015.

English and Japanese LPCM stereo audio with English subtitles.  Included in this release are both of the show's bonus OVA episodes, 12.5 and 25, four art cards, and clean opening and ending sequences.

9
Durarara!! is undoubtedly one of the best and most complex anime series you will ever see.
LATEST REVIEWS